Tim had subscribed to the latest Quartermaster General Kickstarter and turned up with the Cold War version of QMG hot off the presses. It is designed to be played with 3-6 players, with three main blocs - NATO, Warpac and non-aligned (China, India etc). With more than three players each block is split in two, with a clever two deck system for each bloc which gives each of the pair differing capabilities but they score together. 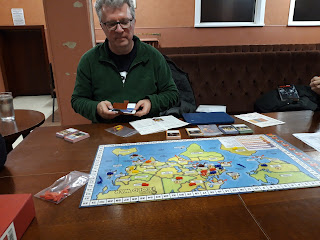 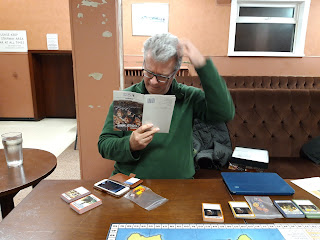 Naturally Tim hadn't read the rules, so we spent a bit of time figuring out how it worked. 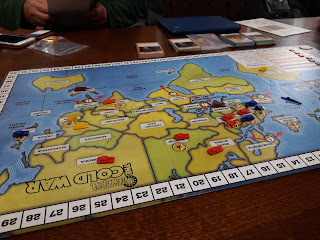 John and I were playing Warpac. My deck seemed to be a bit more on the global revolution side of things, whereas I suspect Johns deck was a bit more warry. In QMGCW, opposing pieces can both occupy a zone, so Germany had both Warpac and NATO pieces in it. I think we'll have to do something about that. 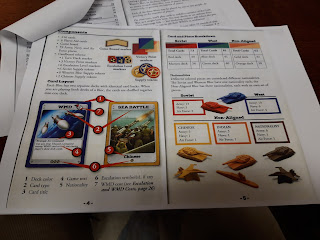 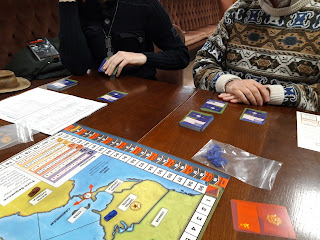 NATO sort themselves out. Draw decks and prepared card decks. Prepared cards are even more important in this version than the WW1 version as that is how you carry out 'espionage' actions. Many of the espionage actions were really, really powerful but took a bit of planning to make the most of. 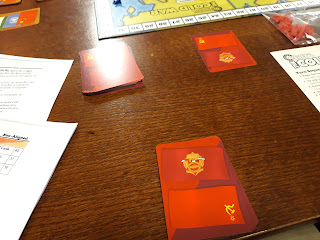 My enigmatic Warpac deck. I had some really great espionage cards, including successful revolutions in Cuba, Central America, Africa and Vietnam! Each revolution would give as a supply base (and VPs) and an associated army. I was seriously planning on invading and taking over North America via Mexico. Maybe Trump is on to something. 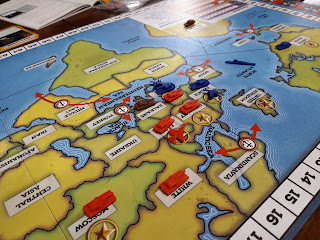 My somewhat more warlike colleague in STAVKA had different ideas, and we soon kicked NATO out of Berlin and Germany, and even parked some Red Army tanks in Italy. Aggressive actions suffered an 'escalation' penalty so the baddies could do stuff back to you with political impunity, but with our tanks parked on the Rhine, who cares? 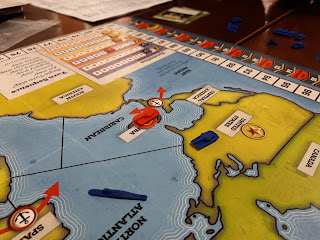 Cuba duly fell to Castro, and we even had some short range nukes to station there. Oh dear! 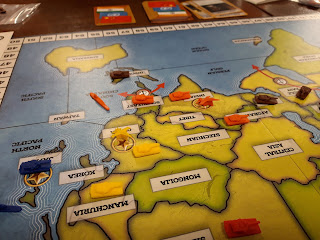 While all this jollity was going on, India, China and various unsavoury nationalists were romping all over Asia. There went my hopes of an early success in Vietnam. Sadly, this was reflected in the points as the non-aligned powers roared ahead. 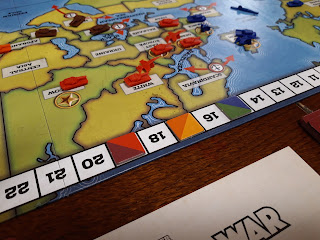 Over in Europe, Italy was finally ours, through the judicious use of some tactical nuclear weapons, but those d*mn nationalists were all over the Balkans. Fun as this was, we'd have been far better off taking over Africa and Central America. 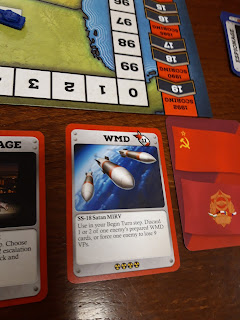 There was great excitement as we deployed these SS-18s. The little radiation markers and the great big bomb symbol with '11' in it said it all really. These boys go up to 11! That'll deter NATO aggression all right. Even we weren't crazy enough to fire these with the escalation level so against us. Not fire them yet anyway... 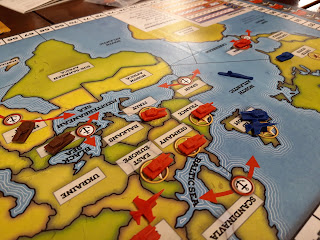 The Russian juggernaut rolled over France, but the non aligned powers were miles ahead now as our VP penalties really kicked in. We called it a day in 1960 as NATO and Warpac were outclassed by the new world power, China. Well, that will never happen in real life will it?

That was really good fun,and with the benefit of hindsight, we'll have a much better idea how to play it next time. All out war is a no-no, spreading global influence and stamping on those pesky nationalists is the way to go. I think sadly we were too influenced by the more warry WW1 and WW2 games and forgot we weren't actually fighting WW3. Very clever, and I'm looking forward to trying that again.