Avid readers may recall I tried out a variant combat system for OHW using my WW1 toys last year. Essentially the standard D6 plus or minus 2 to hit, and 15 hit units is replaced with one, two or three D6 each  hitting on 3+ and units have only six hits. The average lethality and duration of combat is unchanged, but the distribution of results is more interesting, and using a base 3+ to hit makes it far easier to factor in armour etc (half hits becomes a 5+ and half again becomes 6).


I wanted to try it with the Ancients variant as I'm a bit dubious about the more shooty OHW variants, too much scope for unrealistic ganging up I think. Anyway, I dragged out my old 20m plastic Romans and Carthaginians for an outing to the killing fields of Northern Italy.

Tim C and Tim G took the Carthos, while John and Jerry took the Romans. 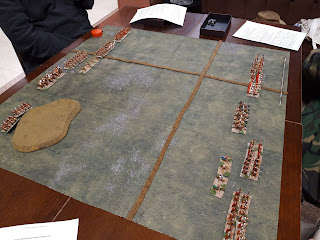 The scenario was OHW 2 'pitched battle'.  Whoever controlled the hill and crossroads at the end won. Hilariously both sides rolled up identical forces of four heavy infantry, one cavalry and one skirmisher unit, so my carefully crafted additional unit types of Auxilia and Warband weren't needed. 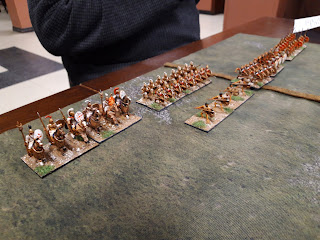 Cartho cavalry, skirmishers and infantry. In the variant cavalry get 2 x D6 combat dice, skirmishers just 1 x D6, but can conduct ranged combat and interpenetrate. Neither are armoured and both take six hits. Romans. Heavy Infantry get 3 x D6 in close combat and are armoured. These guys are very dangerous, but slow. 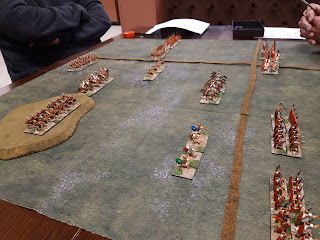 Both sides pushed forwards on a long front. The Carthos kept an infantry unit in reserve, which proved to be a good move in the long run. 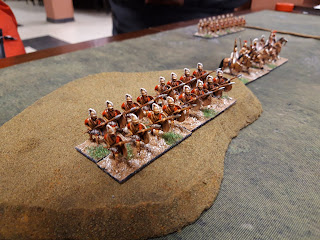 Carthaginian heavy infantry occupy the hill. Armoured troops up hill are only hit on a 6, ouch, The Romans only hope was to outflank them (as flank and rear attacks get double dice. 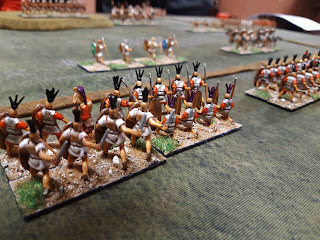 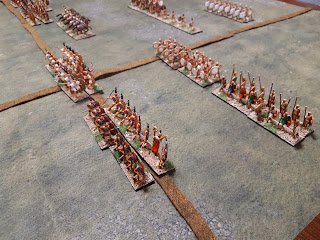 Over at the crossroads it is a 2:2 faceoff between two units each of heavy Carthaginian and Roman infantry. 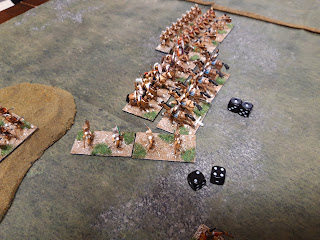 First contact. The Roman cavalry and velites  engage the Carthaginian cavalry. In OHW Ancients once units are in melee they stay there until they win or rout, so the decision to engage is important. The Romans duly threw appalling dice (they had four dice, needing 3+ to hit each). 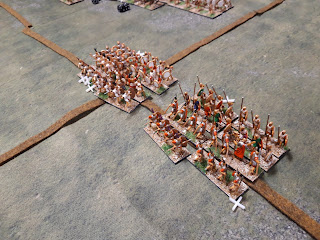 Battle was also joined at the crossroads. This was a real slugfest as each side was throwing three dice per unit, but only hitting on 5+ as they were armoured. 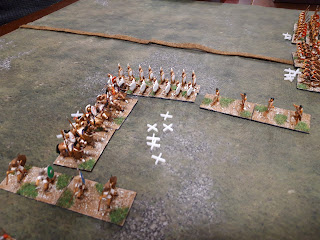 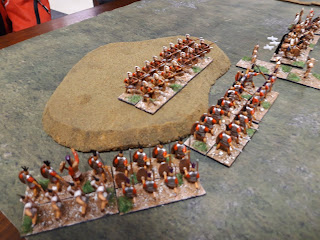 Over at the hill, the Carthos were outnumbered 2:1 but their uphill bonus evened the odds. The Romans manouvered into position for a combined frontal assault and flanking attack. 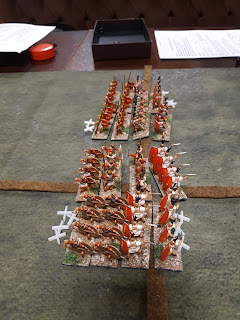 It was honours even at the crossroads, both sides steadily wearing the other down (average expected hits per turn being one per unit). Luck of the dice was going to determine this one, although the Carthos had the slight advantage of the initial strike. 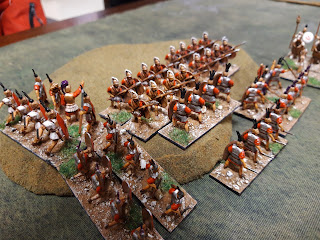 The Romans closed in on the hill. Three dice needing 5+ vs nine dice needing 6, so advantage to the Romans. (the flanking unit was doubled). 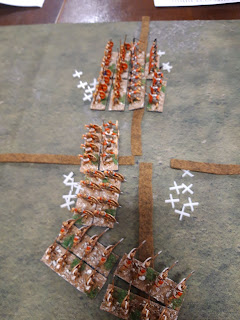 The stalemate at the crossroads was broken by the Carthaginian reserve, which now switched fronts and flanked one of the legions. The Romans left the field, and just in time as the other Carthos were one hit from breaking. The other Carthaginian unit broke just as the Carthaginians reserves rolled into the Romans flank. 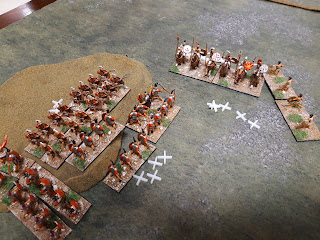 But back the the hill the Carthaginian cavalry and skirmishers rolled up the Velites. The struggle for the hill went on. 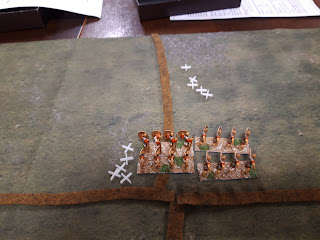 The fresh Carthos finally route the last Legion at the crossroads. 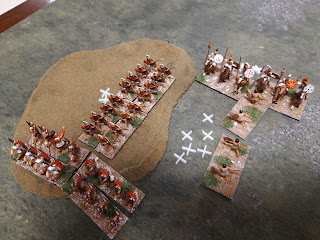 Back the the hill the Cartho cavalry and skirmishers flanked and wiped out one of the Legions. 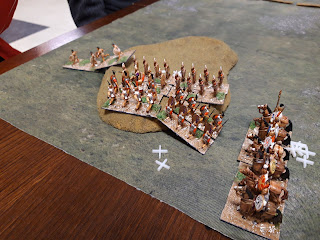 The Carthos on the hill were now able turn to face their flank, while the last Romans in turn were enveloped by the skirmishers and cavalry. 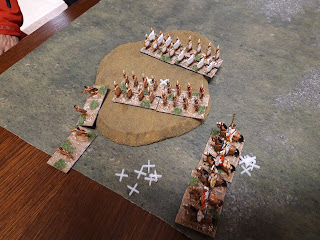 It was soon all over and the Carthos were left in control of the hill. 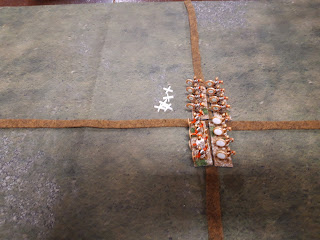 Well that was exciting, and a closer run thing that the final tally of units indicates as a lot of the Carthaginian units were fairly ragged. The decisive factor was the cartho reserve unit which managed to intervene decisively in the centre and left flank, in turn freeing units to intervene on the right flank.

I was pleased with how well that variant worked. There were a few grumbles about facing and movement, but not more than usual with a ruler based game. It seems to move along a bit quicker than the normal combat system and so allowed more of a focus on decision making - in this scenario, essentially who to engage, when and it what strength. Once units were engaged, they lost all freedom of manouvre, which sounds about right for an Ancients battle.