I've always had a soft spot for the Jagdpanzer IV, even going so far as to convert a couple of Airfix Pz IVs into Jagdpanzer IV Fs back in the early 1970s. Approximately 2000 of them saw service in the last 12 months of the war, making them rather more numerous than the omnipresent Tigers, being assigned to both panzerjaeger battalions and from September 1944, as an additional company in selected panzer battalions. The Fuhrer Begleit Brigade had an entire panzer battalion equipped with them during the Bulge.

My immediate 'need' was more prosaic. Regular readers may recall my lament that 9th SS Panzerjaeger Abteiling had to make do with a Stug in our recent Arnhem game, whereas irl they had managed to drag a couple of Jagdpanzer IVs up to Arnhem with them and had unaccountably failed to hand them over to 10th SS Panzer. 10th SS Panzer had a battalion of Jadgpanzer IVs with KG Walther, and 107th Panzer Brigade which rolled up at Veghel had even more to support its Panthers.

With more Arnhem games looming, I thought it was time to rectify this appalling gap in my 15mm armoury (my 6mm and 20mm chaps are already well equipped). So, off went a quick order to QRF which turned up a few days later. 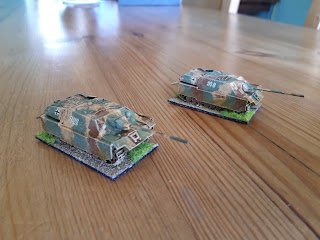 Lo and behold, after a few dobs of paint, a pair of Panzer IV/70(V) advancing over the dining table. I went for the 75L70 version as it was by far and away the most numerous, even most of the surviving Panzerjaeger IVFs were later retrofitted to PzIV/70 standard. Confusingly these versions are generally referred to as Panzer IV/70 in most Germans strength returns (or even Pz IVL), wereas the 75L48 versions were referred to as Panzerjaeger IVs. 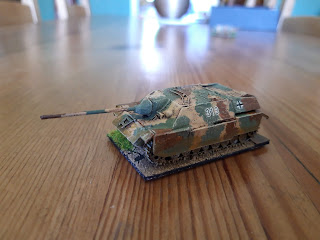 The models themselves are fairly simple, consisting of the hull, engine deck, two track assemblies, the gun and two side skirts. The hull is hollowed out to keep the weight (and price) down. The tracks are also very lightweight, consisting of just the tracks and wheels without a backing piece. They were nice clean castings with very little flash and few mould lines, although the hatches were a bit indistinct. There was a slight gap between the engine deck and the hull superstructure (I guess it was moulded that way to deal with undercuts on the rear side armour) but easily filled with a sliver of filler. 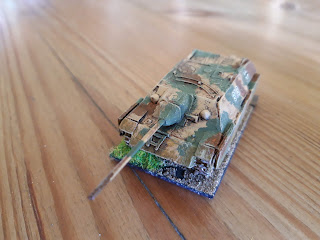 From this angle you can see there is quite  bit of raised detail which takes a wash and a drybrush well. The gun is rather long a thin, so will need careful storage. A problem the real vehicles had too, with a tendency to stick the end of the barrel into the ground. The frame on the glacis plate is a travel lock for the gun. 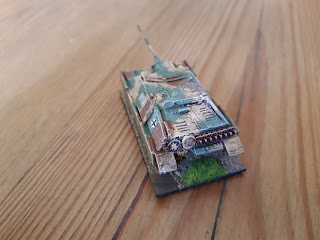 The rear deck, which also shows the additional side plates. I added some spare track links and a couple of spare wheels, one with a rubber rim, the other steel. The real thing was so nose heavy due to the larger gun and extra armour (the same as a Panthers) that the front running wheels wore out quickly and were replaced with steel rimmed ones. 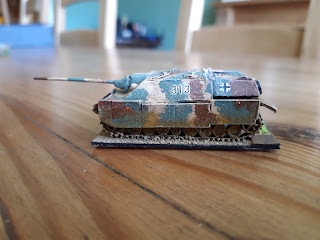 The real versions were often missing their side skirts, torn off trying to negotiate some obstacle without damaging the gun. I put them on as they look nice. The side view shows how low the profile was, even lower than a Stug, although the Alkett version just plonked the armoured superstructure onto the existing Pz IV hull, so lost some of the benefits. It looks like a lean, mean, killing machine with the same armour and gun as a Panthers, but on a Panzer IV chassis so underpowered, overloaded and unwieldy in rough terrain.

I did toy with doing them in ambush scheme, but in the end just went with dunkelgelb and stippled green/brown disruptive followed by an inkwash. The pattern is based on a photo of a specimen captured in March 1945. I chose 313 as the designation for this, as that is the number on a completely intact version captured by the US Army and used for field evaluation.