My slowly expanding US forces are in need of a bit more AT support than the pair of M10s they already have.  The US version of the 6pdr was ubiquitous right to the end of the war in battalion AT platoons and regimental AT companies, even if it was replaced with 3" or 90mm guns on towed or SP mounts in tank destroyer battalions.

I have, on occasion, used British 6pdrs, but I thought it was time the Americans got their own guns. I toyed with getting the 6pdr/57mm set from PSC, but I need more carriers like a hole in the head (the PSC set comes with four guns and four Loyd carriers). So I just ordered a pair from QRF. 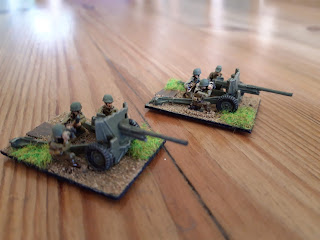 That'll show the Hun! They are nice little models and look distinctly different to the British versions, mainly due to the lack of a muzzle break. 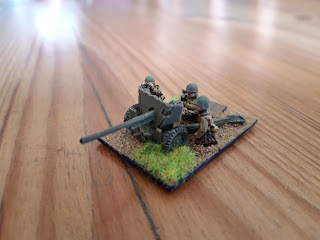 Unlike the the 5.5" guns, these were rather more fiddly to put together. The gun mount and trail were cast as a single piece, but the wheels and both parts of the shield were separate, the latter without any obvious locating points. After much cursing and gluing together of fingers, I got the whole thing assembled by using lashings of blu tak soaked in superglue. 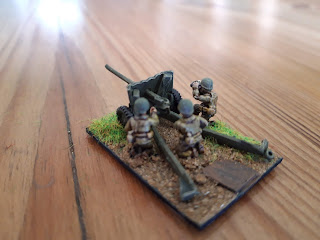 Once they were finally assembled, they looked pretty good with some nice detail which the drybrush picked out well. The supplied gun crew figures also had nice deep engraving on them which took an inkwash really well, much better than the PSC plastic figures, and made their otherwise rather drab uniforms and webbing stand out. 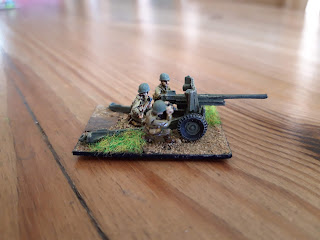 In the end I was really pleased with them, the figure poses really complement the gun and have a feel of troops tensely crouched for action.

Another useful tip is that fingers superglued together can be separated fairly painlessly with nail varnish remover. Who knew?