If regular readers are concerned that all I'm buying are various types of super heavy German tank destroyers, then fear not, I've also bought some crap. The Peter Pig July special offer was very generous, so I shelled out on several packs of bits and pieces. First up were a couple of Nebelwerfers. I've been meaning to get some for ages and Peter Pig guns always go together so easily. 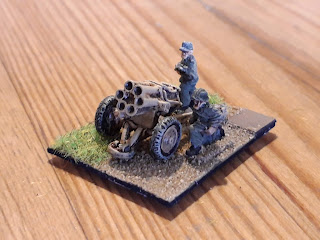 These were no exception, with only four pieces and nice big locating holes so hardly any blu tak was needed to hold them together. The crew are old figures from the spares box, the standing gunner being an old PP DAK figure from the mid 1990s. It is interesting how much smaller and cruder they are than modern offerings. The kneeling gunner is an old SS figure from around 2000, but I just slapped field grey all over his smock. You wouldn't stand quite so close to the werfer if you were going to actually fire it, but maybe they are busy reloading. Artillery pieces without crew just look a bit odd. 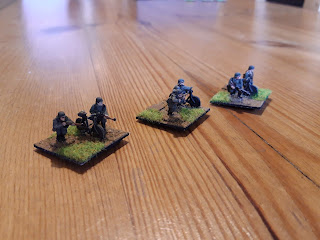 I also bought some more bicycles to make up some stands of Fusiliers and recce troops. It is a shame PP don't make actual German cyclists, but hey ho. 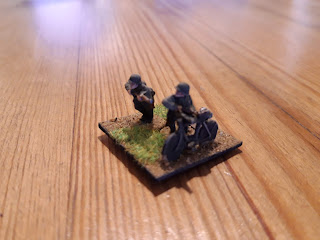 I bodged up a few PSC early war Germans into poses where at least one hand was on the handlebars. Converting them into riding figures was beyond may patience (I've converted a few 20mm riders but couldn't be bothered on this occasion). 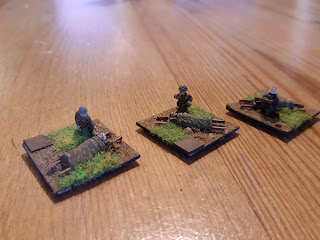 I also got a pack of stretchers. I'm really not sure why but I guess they'll come in useful. I bodged up a few medic stands using various kneeling figures. 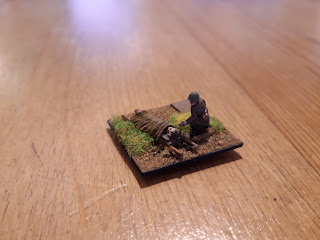 Here a kneeling Soviet gunner tends his wounded pal. From a distance he might be mistaken for a US soldier. I was actually looking for one of the PSC female adjudent figures to use as a medic as they have a handy bag, but I seem to have used them all as AA gunners. And I've got the inevitable German medic with his helmet painted white.

I got a few other bits as well, including some extra German cavalry and some more Cossacks. A vital ingredient of modern mechanised warfare is a load of blokes on horses. I may also have accidentally bought another PP Tiger 1, but I'm sure you've all seen enough German heavy metal recently.