Tim has already commented on this game on his blog, but I missed the first outing so he kindly brought it along to try again. I have a certain interest in Dark Ages warfare (mainly prompted by 'Vikings' and 'The Last Kingdom' and I've always been intrigued about how you make a game out of a period with only one tactic..."Shieldwall!"

I have never taken the plunge into painting any Vikings as after painting far too  many Ancient Gauls, I swore I'd never paint irregular warband ever again, especially if they were riding horses. Anyway, Battle Ravens solves this problem by providing lovely cardboard stand up soldiers for each side. 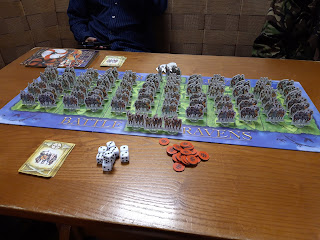 Here is what you get, a board rammed with hairy Vikings and Anglo-Saxons. Not much scope for tactical manouvre here. So not hugely different to the Western Front in 1916 then. The main troop types are well armed and trained warriors, and a some rather less well armed farmers hastily thrust into the line. They did have specific game names, but I can't remember them. 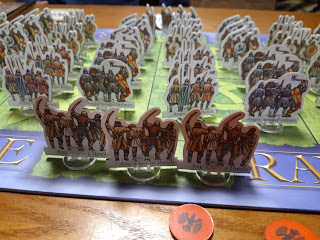 These are the guys who stand and the back shooting arrows over the Shieldwall. Thralls? Anyway, they are quite handy as they let you re-roll some attack dice, but they are an expendable resource so use them wisely. 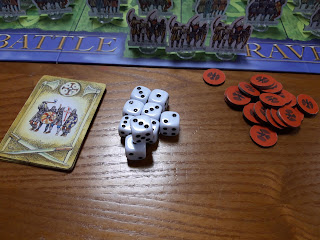 Along with the chaps, you get a pile of tactics cards and a pile of Battle Raven counters. The counters are what make the game work, as they essentially function as command points. You allocate them to sectors to make attacks, move units etc. More points is more attacks (or more defences). 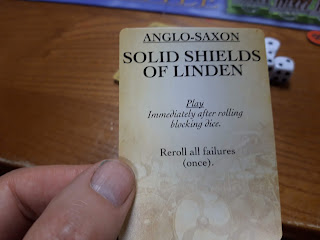 One of the tactics cards. These are also self explanatory, but like the thralls are an expendable resource ie you only get to play them once. 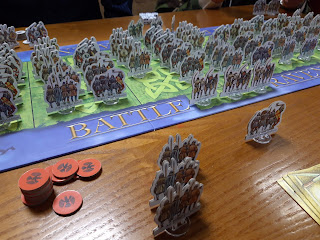 What makes things interesting is that each player takes it in turns to allocate their command points to each sector. Once you've allocated to a sector, that is it, no going back. So if you telegraph your intentions with a huge stack, expect the opponent to counter it. A certain degree of poker player bluff is required at this point. 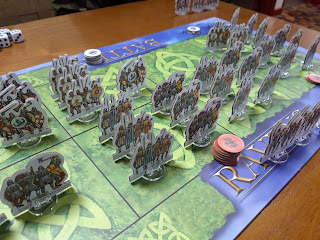 Once the counters are all allocated, there is lots of dice rolling. Attacking dice generate successes, and the enemy cany try to counter some (by throwing dice). Unsaved hits then translate into losses, the farmer types being worth 1 and the warriors 2. Individual stands can also shuffle around, and you win a sector by destroying all the opposing enemy, so shuffling into weak sectors is a good idea.

In the picture above the brave Anglo Saxons have blown a hole in the Viking shieldwall. 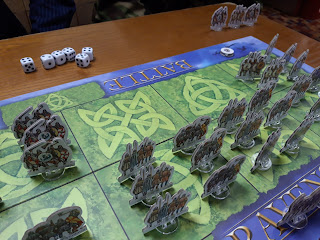 And they've managed to create another hole. Isn't this a great set of rules? (You've probably guessed I wasn't playing the Vikings) 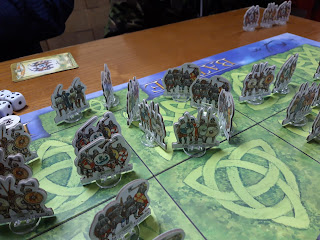 A certain degree of Viking shuffling plugs some of the holes, but not enough to stop my brave boys surging forwards. At which point they take no further part in the proceedings, being busy drinking ale from the skulls of their enemies etc. 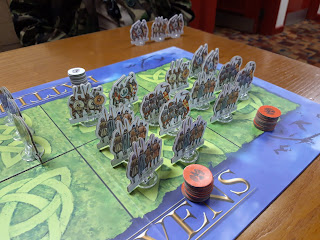 The breakthrough in the centre allows me to pile all my raven counters against what is left of the Viking left wing. The Vikings find it hard to counter as losses reduce the number of raven counters. 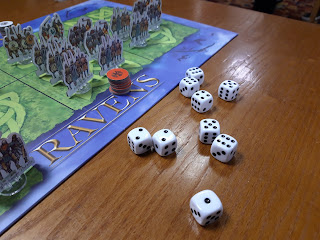 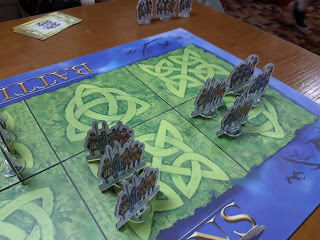 The remaining Vikings are despatched. 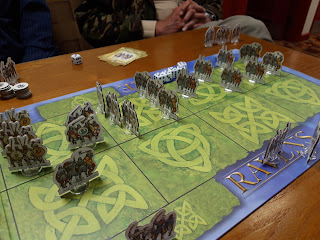 And although they chop my left wing up a bit, it isn't enough to stop their line breaking.

So, that was a lot of fun and an interesting approach to attritional warfare. It reminded me to a degree of the Somme card game 'XV Corps' where you play various cards to mount divisional attacks along a fairly static front. Recommended to anyone with an interest in Dark Ages warfare, and more generally, anyone interested in high intensity combat on narrow fronts. The mechanisms would migrate across quite nicely to Verdun, Third Ypres, Kursk, Stalingrad or the Battle for Normandy.