Hannants had re-stocked some of their Zvezda range so I picked up a few more planes. My Russians in particular could do with a bit more large scale air support than just their lonely IL-2! I was after something which could be used as a spotter/liaison plane as well as a light ground attack aircraft and the Zvezda PO-2 was just the ticket. 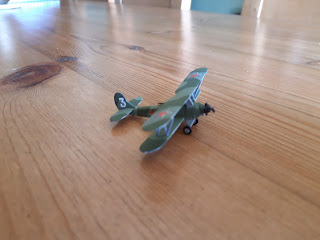 Ah yes you can't beat a biplane. The PO-2 is surprisingly large but it is a two seater bomber so I suppose that isn't unexpected (albeit with a tiny little engine, which was why it spent much of the war flying at night). 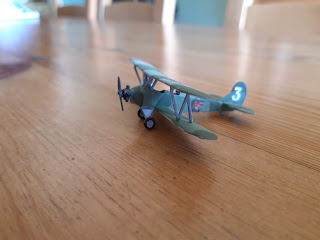 It went to together very well, even the struts, which slotted into place far more easily than the horrors of things like the Airfix Sopwith Camel, and has a certain racy look to it. The only shame is that there aren't any crew figures. I suppose I could have bought some from somewhere, but I didn't. 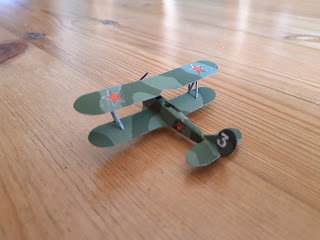 I finished it in the light green/dark green scheme which I think is quite fetching. The decals were borrowed from some other kits as I had another use for the stars (edged in black) supplied with the model. I like the great numbers which came with it though. 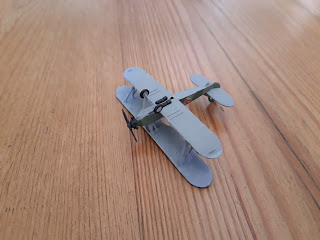 As usual I didn't bother with decals under the wings. It has a couple of nice big bombs slung underneath, and quite a large fixed undercarriage. 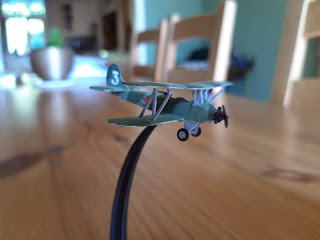 Here it is off to sow mayhem among the fascist invaders. I now have quite a large collection of Zvezda flight stands, a bonus of Zvezda kits!
Posted by Martin Rapier at 23:27