Battle of the Coa

Johns trip to battles of the Peninsular took us to the Siege of Almeida this week, and the Battle of the Coa.  At last, some decent troops to fight the Frenchies!

Almeida was held by an Allied garrison, and the Light Division of around 4,000, under 'Black' Bob Crauford was rather unwisely floating a round outside it, despite being warned by Wellington that it was unsafe to stand on the far side of the river. Meanwhile Ney was marching towards Almeida with over 20,000 men and when his cavalry pickets found the small British force in the open, he hastened to attack at once in the early morning mist. 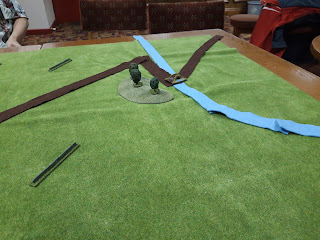 The Coa and the road leading to the fateful bridge. In real life it is a steep ravine (hence the bend in the road) and the whole area was deemed to be out of LOS unless units were actually over the edge of the ravine. 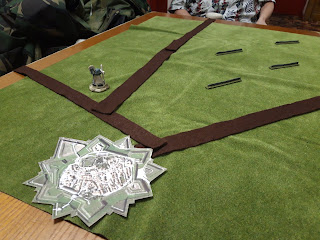 Almedia, with various enclosed fields around it. These were ruled to provide cover for skirmishers only, as irl they didn't prove much of an obstacle. 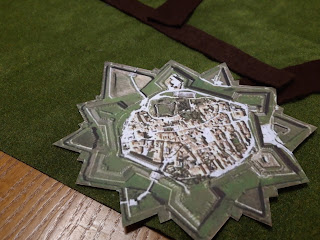 Almeida! a scan from Google Earth. 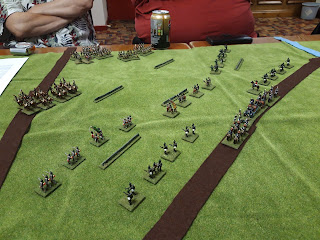 The Light Division deploys covering the road to the bridge. The cavalry picquets and Chestnut Troop, RHA, are already formed up to pull back. The infantry are two battalions each of British and Portuguese light infantry, and in the far distance, the 95th Rifles. Sharpe and Harper are in for a hot day. 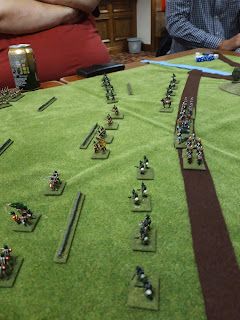 Portuguese Light Infantry in the foreground. They are all formed up in skirmish order to take advantage of the walls. Tim and I were the British, and we thought we had a cunning plan. 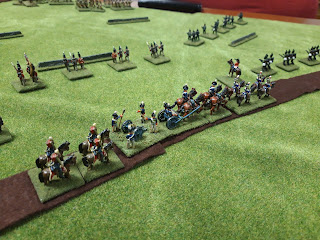 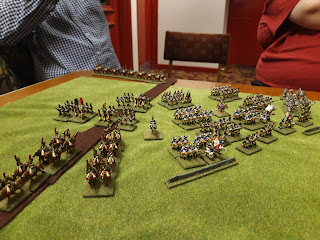 Neys leading division. There are an awful lot of them! Thirteen infantry battalions and four cavalry regiments. Plenty more behind... Graham, Tim C and Jerry took the French. 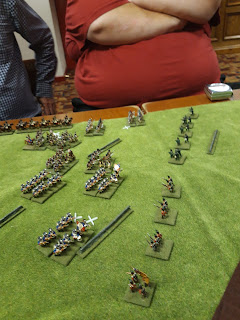 Our opening volleys were very effective, which rather took the swagger off the advancing French. 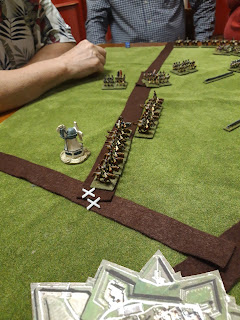 The French cavalry shook out into line, but took some losses from the fortress guns. Almeida had over a 100 pieces of artillery mounted on the walls, but somewhat unhelpfully, most of them were sited to fire in enfilade along the bastions. 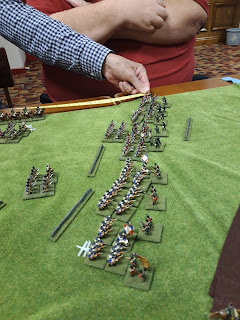 The surviving French made contact all along the line. Attack columns vs skirmishers, not so good... 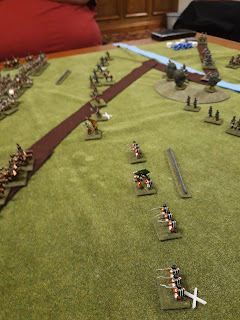 Our guys evading back, becoming disordered in the process. At least they had bought some time for the cavalry and guns to get over the river. Unlike their real life counterparts, Chestnut Troop made it across without leaving a disabled cassion to block the road (they passed all their move checks, much to our relief. 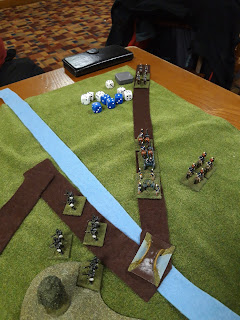 The guns began to deploy on the far side of the river, while some Portuguese infantry headed for the bridge. The cavalry fanned out to clear the way. 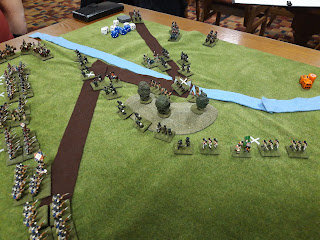 By now we were in a ring around the knoll covering the bridge as one battalion was over the bridge and another was lined up to do so. Alarmingly two French cavalry regiments were sneaking around the left flank in a typical wargamery fashion. 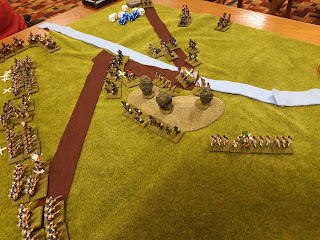 As the French closed in, were formed up into close order. 95th on the left, Portuguese in the centre, and 'South Essex' on the right of the picture. Crauford went to join the 95th as they seemed to be facing the bulk of the French. 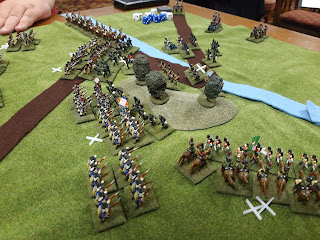 And in they came. Two battalions against the Portuguese, two more against  the 95th and a cavalry regiment against the South Essex. 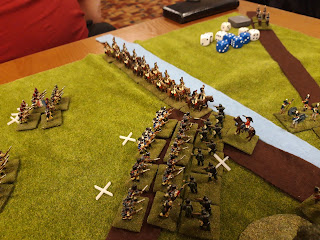 The 95th didn't do to badly at first, inflicting some losses on the French. 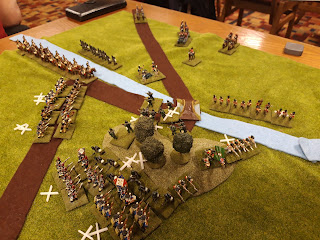 But sadly in the ensuing melee came off much the worst and broke contact into a sort of pudding shaped skirmish formation. To add insult to injury, Crauford was wounded and went in search of medical attention. 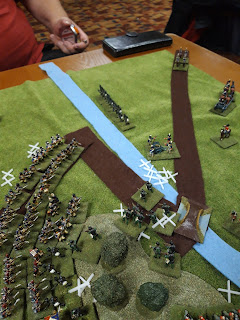 The French cavalry followed up into devasting defensive fire from across the river and the regiment routed, leaving a sad pile of white crosses behind. 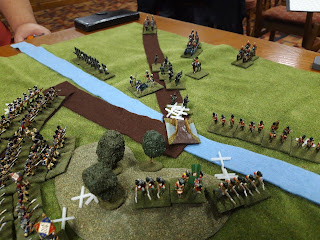 The South Essex had seen off the French cavalry at some cost and fell back to the knoll as the 95th retired across the river. The Portuguese did not manage to score a single hit in melee at all, and unsurprisingly were overwhelmed by the French infantry. 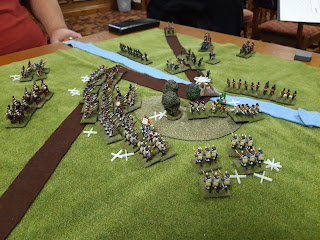 At this stage it was pretty much all over and the South Essex were clearly going to escape. Ney declined to repeat his historical counterparts series of suicidal assaults over the bridge, so with four battalions over the river it was duly declared to be a 'tactical victory'.

Fighting retreats in the face of overwhelming force are always difficult to model and to game, but that worked OK. Our original plan proved to be over-optimistic in the face of French speed and strength, but we just got away with it. The French didn't feel too had done by as they'd routed the 95th, wounded Crauford and obliterated one of the Portuguese battalions, albeit at the cost of two destroyed cavalry regiments and hideous infantry losses. Ney had flung himself into the heart of the action time after time and missed death by a hairs breadth. Truely, the bravest of the brave.