John put on another game in his tour of unknown battles of the Peninsular War, this one was hot on the  heels of Tims 1808 matrix game. This was the Battle of Ocana, some 35 miles south of Madrid, featuring Joseph Bonaparte and Marshal Soult taking on a huge Spanish Army under General Arezaga hiding behind a ravine.

Tim G, myself, Richard and Diego took the French, while Tim C, Jerry and Graham took on the wicked Spaniards. 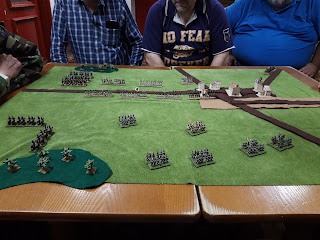 View from the French side. Tims cavalry are on the left, I've got the brave Poles and Battenburgers while Diego has a great mass of French infantry. Basic plan, avoid all the Spanish in the town and roll up their right flank. Simples! We had 12 turns to destroy the entire Spanish Army... 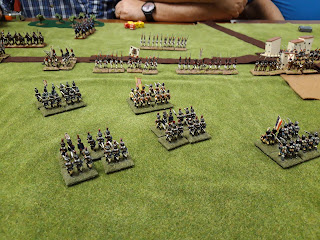 My Allied contingent led the way, marching rather slowly to  let the French catch up. Each unit represents a division, so as there were no grand batteries, all the artillery is factored in. 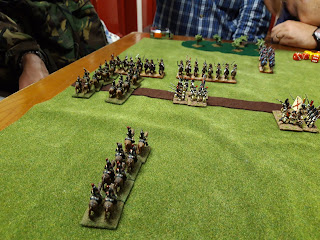 Over on the left a massive cavalry battle rapidly develops while some of the Spanish form square. 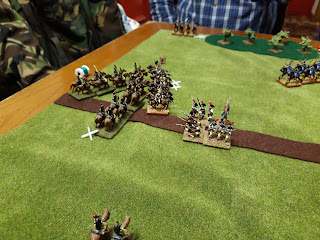 It is all very bloody and unpleasant! 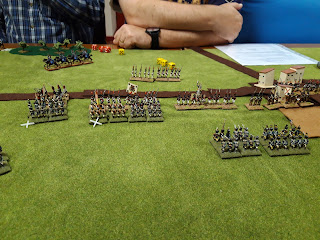 The French infantry have caught up, so a massive three division assault goes in against the Spanish right. 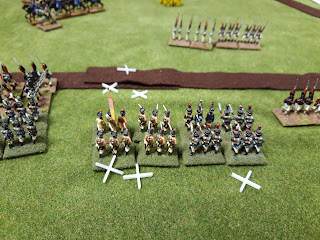 The superior quality of the French Army soon tells and rout the first Spanish division. The square is proving a tough nut to crack though. 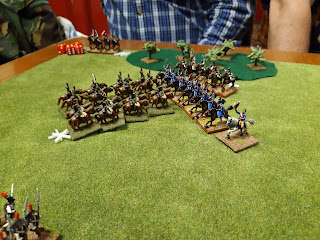 The French cavalry inexorably drive their opponents back. 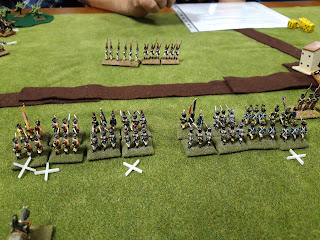 Another Spanish division is routed. Time to stop for a turn and reform. 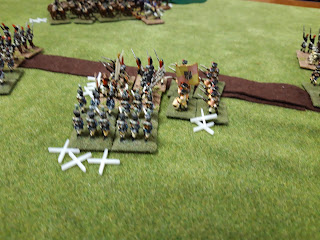 Sadly things are looking a bit sticky at the square. The Battenburgers pile in but also suffer some disorder. One more hit and the Poles are going to rout. These Spanish were apparently armed with machineguns judging by the fire damage they put out. 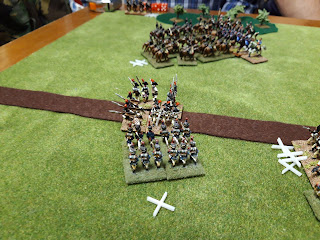 Some French infantry took on the far left Spanish square after shooting them up first. The Spanish defensive fire was still astonishing though. 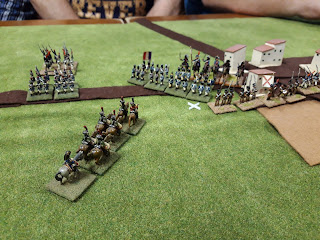 In the centre our chaps rallied and Richard committed our reserve cavalry and infantry to assault the town. 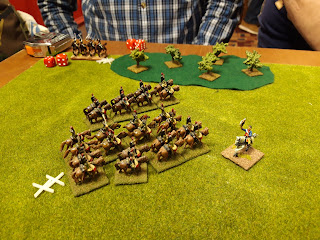 The last of the Spanish cavalry left the field, and at that point we called it a day.

The Spanish were left with three divisions surrounded in the town and the rest of their Army routed. The French had lost one base of troops. So a resounding victory, as in real life. I've done a fair bit of commanding the Spanish and it can get a bit dispiriting facing the French without a significant terrain or numerical advantage, and I think the Spanish commanders did the best they could under the circumstances.

There are a couple of oddities with the rules but they work well enough and produce a fast game which looks like a proper wargame.