I have been slowly building up an essential force for any WW2 German player, cavalry! While the Heer only had a single cavalry division, later converted to panzers, cavalry were omnipresent in divisional and regimental recce units and the SS also had a bit of a thing about cavalry brigades and divisions. 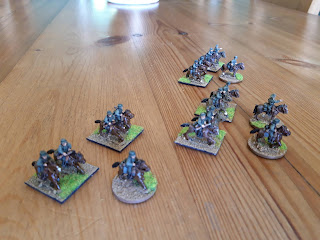 Here they are so far. Enough for a Megablitz cavalry division, and a number of squadrons for less meglomaniac rules systems. 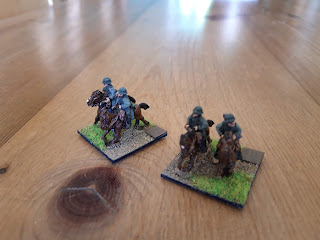 I used a mixture of the carbine armed and cavalry command figures to get a reasonable mix of poses. They are all nice clean castings, and joy of joys, the riders are moulded onto the horses. I wish more manufacturers would do this for wargames quality pieces. They have a decent range of horse and personal equipment, which all paints up nicely. Like most of my WW1 cavalry, I did most of them based in pairs, but also did some single based figures. 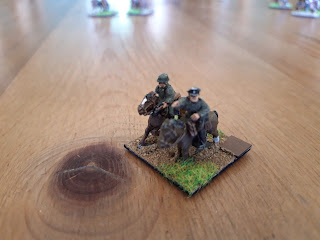 The command pack includes officers in both crusher caps and helmets. Ideal for command stands. 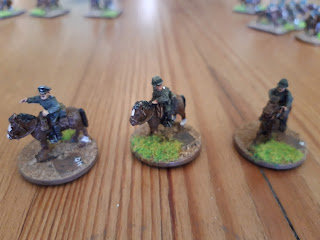 I did a handful of single based figures, they are really useful for recce stands or to use as mounted command stands.

So a bunch of lovely little figures, really easy to paint and useful for lots of things. I generally don't like painting horses, give me a tank any day, but I've settled on a reasonably fast method over the years. A base  coat in some sort of brown (GW Bestial Brown is ideal), I try to use a mixture of three shades. Pick out the manes and tails in either black or dark brown (depending on the shade of the horse), then give the whole thing a heavy dark brown inkwash. That runs into the crevices and gives the horse a bit of sheen. Finally a light drybrush will pick out the highlights on the mane, tail and tack and then follow it up for odd dobs of white for sock etc which make them look a bit more natural. I used to pick out the tack but ti is rarely worth the bother and wash and drybrush seems to work just as well.