As I noted in my recent post on the Peter Pig July 2019 special offer, along with stretchers, bicycles and Nebelwerfers, I may have bought another Tiger. You can really never have too many Tigers, and I have delighted over the year in finding scenarios to field them only to have the Germans hopes dashed as they run into walls of 17pdrs, medium artillery, HMS Belfast or waves of T34s and T70s. Luckily they are omnipresent in Normandy (the British sector anyway), turn up at Arnhem, the Seine Crossings, much of the Italian Campaign as well as many of the key actions on the Eastern Front 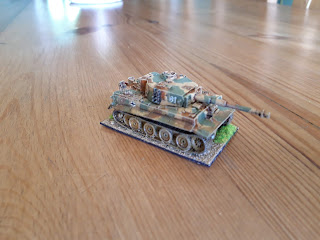 This is a pretty standard mid-war model. The track links and cables are moulded on. To keep the weight down it is largely hollow, even the tracks are basically just stuck underneath the hull superstructure, but even so, it is a hefty lump of lead. 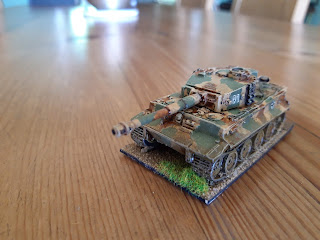 It looks fairly terrifying from this angle. Just what you'd need to guard a bank in occupied Alsace from Clint Eastwood and Donald Sutherland. The gun barrel is somewhat overscale, nearer 188mm than a puny 88. But hey, its a Tiger. 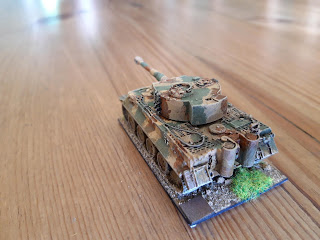 The rear engine deck is exquisite, and overall there are tons of deep recesses and nice sharp edges to pick up a wash and a drybrush respectively. 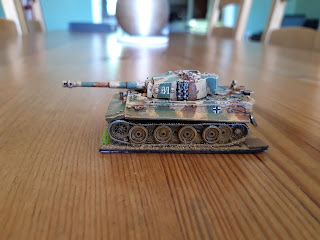 View from the side. The only slightly annoying thing is that the cable obscures the normal balkan cross location point so I ended up putting the crosses further back, which is a much more 1942 type arrangement. I also found that there wasn't enough room between the gun pivot and pistol port to fit more than two turret numbers. Perhaps I should have used smaller decals, but it is what I had. Not the end of the world in any case. 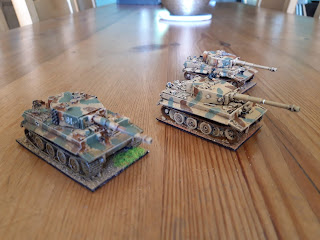 Here it is with some friends, seizing lebensraum on the dining table. If starting on Tigers from scratch, these days I'd go with a plastic one, either PSC or Zvezda, but I already had two old PP Tiger 1s, so I got another to join them as the plastic ones would look a bit slight next to the metal monsters. 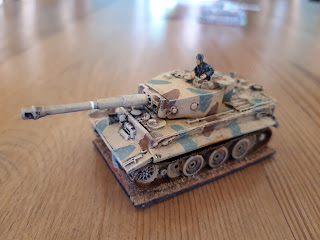 The older models have held up really well. I bought them almost 20 years ago now, and the new one is exactly the same overall dimensions. This is a nice clean model, missing its front outer roadwheel, which was a common eastern front modification to deal with freezing mud. It has an eager looking commander (also PP). I don't think PP make this track configuration any more, but I didn't look too hard. 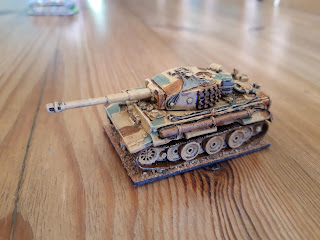 Its mate is a 'battle hardened' variant. It is covered in dents and scrapes, missing track guards and all sorts of junk like spare wheels wired to the engine deck. It is one of my favourite models and has fought in lots of actions over the years. It reminds of the PP Stug IIIG which has a bicycle on the engine deck.

They are all done in the inevitable dunkelgelb, with green/brown disruptive camo. The older ones look a fair bit lighter and cleaner as I didn't dirty vehicles up as much when I painted the original ones. These days I prefer to slap a lot of mud on, it certainly makes painting the tracks a lot easier. I could dirty the old ones up I suppose, but it is hardly a priority.