Tim has jumped forwards in time a bit now away form the Peleponnesian Wars to the rise of some place called 'Macedonia'. Here King Philip II of Macedon and his son, Alexander the as yet not very well known, face off against the Athens and Thebes. The Macedonian Army was notable for its development of combined arms tactics centered around its pike phalanxes supported by an amazing tactical innovation - proper cavalry.

Philip, Alexander and Parmenion fought the Athenians and Thebans outside Chaeronea in 338, in one of the larger battles of the ancient world.

As ever, we played this using CnC Ancients on Hexon terrain with Tims 25mm toys. Diego and I took the Athenians and Thebans respectively, while John ad Graham took the Macedonians. 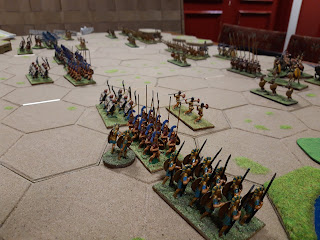 View from the Theban right. The chaps closest to the camera are the mighty Theban Sacred Band. 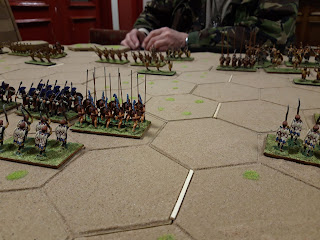 Our centre, with various hoplites and auxiliaries. 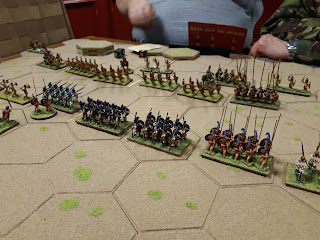 The Athenian left advances after a brief exchange of missile fire. 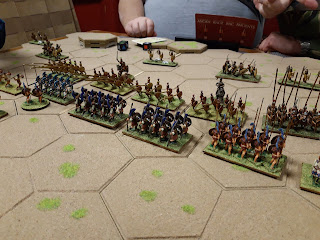 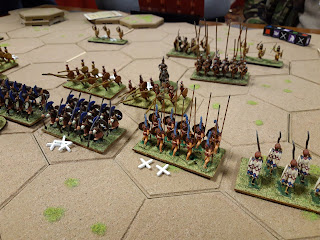 The ensuing melee is really horrible with heavy losses all over the place. 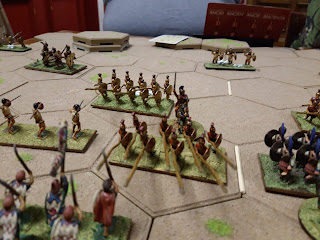 Philip himself plunges into the Greek line with a group of pikemen. 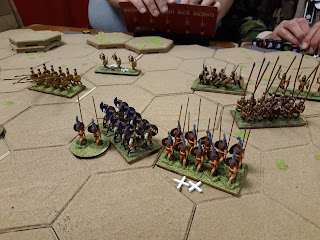 The Athenian hoplites push back, managing to rout some of the Macedonians. 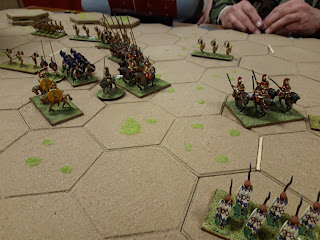 Alexander chose this moment to lead his Companions into the ragged Greek lines, the heavily armoured cavalry crashed into some of the disordered hoplites. Things weren't looking too good. 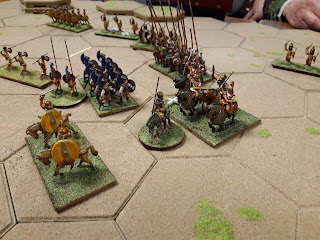 As the Macedonians overran a number of units, things were looking bad. Luckily, we just managed to hang on, despite heavy losses. 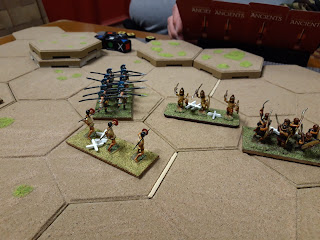 Our final throw of the dice was this desperate attack on some Macedonian light troops. The Macedonians evaded, so we only had one chance.... 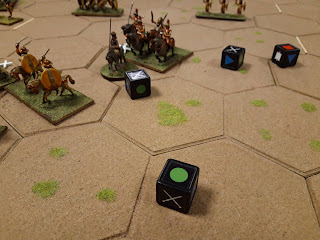 And we got lucky. That one green spot inflicted a hit on them as they pulled back. 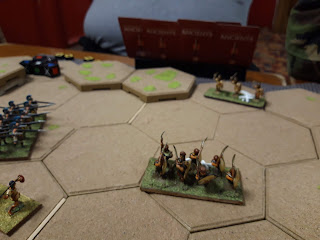 And as they were weakened anyway, it was enough to rout them. 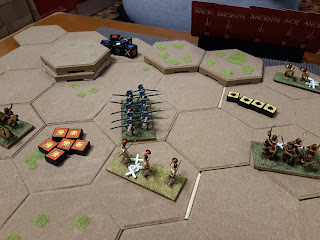 In the end the Greks were victorious, but it was a harder fought thing than the banner total indicates as next turn Alexander was poised to obliterate a number of weakened hoplite units.

So, another nail biting game, albeit with an ahistorical result. Well, Philip will just have to think again.