I picked up a few bits and pieces on the Bring and Buy at COW earlier this year, once of which was that Charles Grant staple, the Dodge radio truck. I thought it would be handy for either my US or Russian forces, and although it is 1/87th, I do use some Roco things with my 15mm troops already and it looks OK. 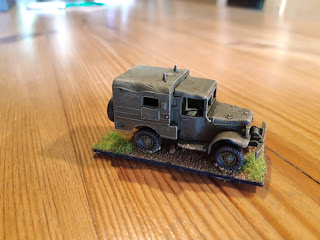 It is a lovely little model, with well defined details and certainly a lot less clunky than the QRF metal ones. It is distinctly bigger than 15mm offerings, but not excessively so and as this is the only Dodge Radio Truck I'll own, I don't think it matters to much. 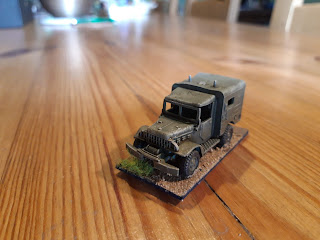 Lovely radiator detail. It has lots of raised lines and bumps which take a drybrush very well. I also like the empty windows which give it far more character than painted on glass/perspex. 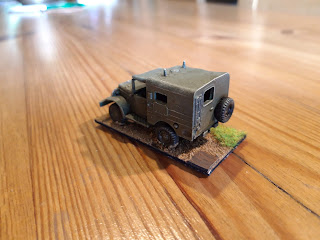 And nice detailing on the rear truck body. I didn't add any antenna as the post bases are already there, and just did the whole thing OD without any markings so it can be used by Russian or US forces. 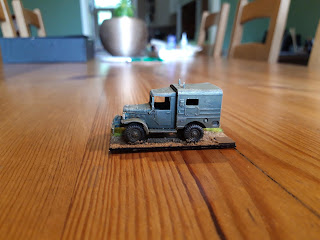 I first saw these in Charles Grants 'Battle', providing transport for the company HQs in his mechanised Russian infantry companies, and finally after almost 50 years, I actually own one!