My love affair with Zvezda continues as I thought it would be good to add to my ever increasing collection of German tank destroyers with some Jagdpanthers. It was prompted partly by my recently
acquired Jagpanzer IV/70(V), as Jagdpanthers were used in a similar role - to equip panzerjaeger battalions, but also as ersatz tanks as supplies of Panthers ran low. Panzer Lehr in particular had a large complement of Jagdpanthers in the Reichswald, as did 12th SS Panzer in the Bulge (widely misreported as Tigers, naturally).

For some odd reason some of my favourite Churchill units (9th RTR and 107th RAC) had a series of unfortunate encounters with Jagdpanthers in their journey across Northwest Europe, so they also give me a chance to recreate Thomas Tomneys feat of knocking one out at 1000m range near the town of Nispen in Holland. He won the MM for that, and I'm not surprised. 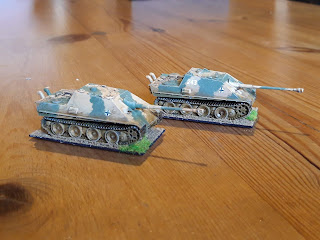 I thought it best not to be greedy and just bought two. Here they are advancing across the dining table. 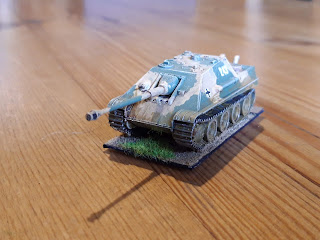 These are lovely models, even nicer than the Ferdinands, and they look very business like from this angle. They are a bit simpler to assemble than Panthers as they have fewer, larger pieces, but there are still separate parts for every major bit of armour plate on the upper hull. In the end they went together very cleanly though. 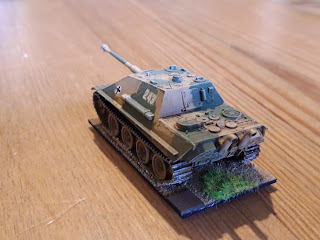 The only slightly fiddly bit was fitting the plate on the rear of the fighting compartment as it slots in behind the engine deck, but if you put both bits on together, it works fine. From this angle there is lots of nice detail and hard edges to pick up a drybrush. 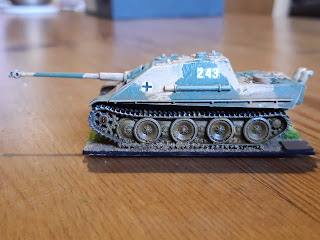 They look really sleek and deadly from the side. I did them both in just plain green and dunkelgelb camo, inspired by the example in the Imperial War Museum. As usual I did the running gear and tracks in mud, gave the whole thing an inkwash and finished it off with a light drybrush.