In a break from our usual remote games, Pete gave us a talk and demo of his 3D printing setup. It is one of those technologies which has come on in leaps and bounds in recent years. My first exposure to it was a few years ago in the Medical School at work where 3D printers were being used to synthesise replacement bone sections for maxillofacial surgery, and the process involved 3D scanning to generate the shapes of the pieces. I was later fortunate enough to visit the Advanced Manufacturing Research Centre where components of the Boeing 787 were being manufactured using a 3D printer which cost around a million pounds. Perhaps a bit out of reach of the hobbyist!
So, it hasn't been something I've paid much attention to, but increasingly I've seen things that people had produced in the wargaming community, which are good quality and relatively inexpensive. Last year Pete bought a 3D printer which makes plastic models, and he ran us through the sorts of things he'd done.
The main thing which make this all work is the control/slicing software, which in this case was provided with the printer. 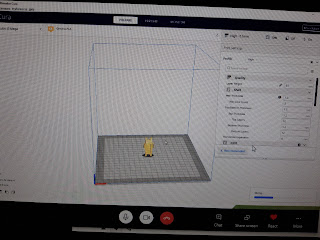 Here a 3D model has been loaded into the slicing software. The software controls scaling, how many models to produce in each print run and critical variables around material thickness and density, the resolution of the 3D image and whether some of the extrusions (MG barrels etc) need additional support while printing.
The model above is of a WW1 Mark IV tank. 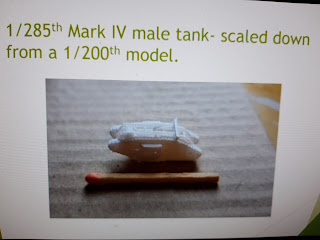 And this is the finished thing. It even has air gaps under the unditching beam rails, just amazing. The thing which really surprised me was the number of 3D models available for free. The Mark IV model came from a free pack containing virtually every WW1 AFV ever made, and which could be scaled up or down as required.
I'd always imagined being crouched over a 3D CAD programme trying to draw a Tiger tank in 3D, but it looks like for many subjects,. other people have already done the hard work. 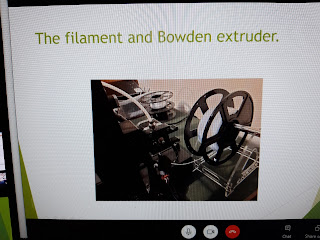 Petes printer runs off plastic filament, which is about £18 for a kilo of material. The other main type of home printer uses resin which has the huge advantage that it can print multiple models simultaneously. With a plastic printer, the print time scales in proportion to the amount of material used so more models take longer. Resin is more expensive (around £40 a kilo) and harder to work with though. 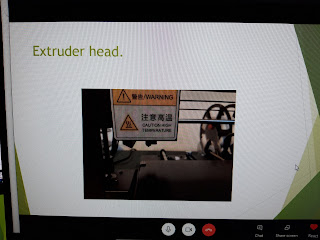 The business end is here, the heated printer head, which moves over the print base. The process is hot, slow, noisy and smelly, so finding somewhere sensible to run the printer is a must. 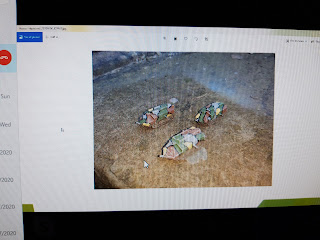 But the finished results are great. A trio of 15mm Schneiders, virtually unobtainable as decent models in this scale except at vast cost.
That was a really interesting session. I'm at the stage where I have more stuff than I know what to do with, and the limitation is one of storage space, so I'm not convinced either the capital cost or the effort of learning how to do it is worthwhile for my situation. If you did need to run off one, or a ton, of specific vehicles, guns, figures or terrain pieces, then it is ideal though.
This is already a viable alternative to traditional manufacturers, and even if the DIY aspect doesn't appeal to everyone, one can imagine a future where figures are printed on demand, in much the same way as books are on Lulu.
Posted by Martin Rapier at 22:43