In a change of pace form Bosworth, Tim put on another Table Battles game and this time we headed off to Gettysburg and specifically Little Round Top. Being a card game, there isn't really much blog friendly eye candy, but here is the 'battle' such as it is. 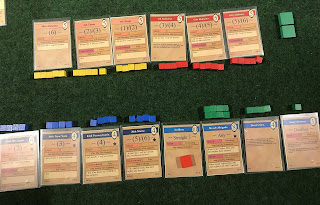 The Rebels have two wings, the red wing has three regiments facing off against two Yank ones, while the yellow wing also has three regiments, two of which are fighting two US regiments and one is pulling a sneaky outflanking manouvre via Devils Den.
As with the other battles in this series, the battlefield layout is managed by which cards are allowed to attack other cards, and in what sequence. Each CSA unit can only attack its historical counterpart, and if it wins, can move on to attack another nearby one. The CSA units all have five strength points as opposed to the US ones with four. The CSA layout is therefore quite straightforward, but the US is far more complex as they are deployed in two lines in difficult terrain with artillery support.
The US have more cards, but only four of these are front line combat regiments (the dark blue units). The rest are special units, one is artillery which can stop attacks dead, another are sharpshooters attached to 20th Maine who can basically get extra hits vs 15th Alabama, one card represents Devils Den which has to be 'attacked' to get at the units behind it and finally the last unit is Weeds Brigade which hangs around in reserve and can absorb hits instead of the US front line. This turned out to be pretty decisive.
As these battles are normally quite quick, Tim ran it twice over two days. On Tuesday Pete and myself took the Rebs, while John, Tim C and Jerry took the Yanks On Wednesday, we swapped sides and Richard joined the US team too.
Day 1
We built up a series of multi-dice attacks, trying to generate a favourable loss ratio. We didn't bother with Devils Den and just attacked frontally. Unfortunately the US used the time we spent building up our attacks to reinforce their defences and our attacks were either halted by artillery fire or frustrated as Weeds Brigade pushed its reserves forward. In the end US attacks routed two of our weakened regiments and the CSA gave up.
Day 2
As the US we tried to replicate the tactics of the day before (piling command dice onto the artillery, reserves and sharpshooters while mounting the odd counterattack). The Rebs tried something different, and launched a series of low odds (one dice) attacks which caused them some losses but forced us to keep reacting and burning the dice on our defensive units. This was very effective and their attacks inflicted losses on the front line at a faster rate than Weeds Brigade could push reserves forward, although there were heaps of dead Rebs in front of the US positions. Finally, one of the US units was reduced to one step and the Rebs launched an attack to destroy it, but they hadn't noticed that we had a single reserve dice left which absorbed the hit and instead it was the Rebs which were routed. Next turn we attacked with 20th Maine, reinforced with Sharpshooters, who routed 47th Alabama and the US were victorious again.
That was a much more close run thing, well done to the CSA for playing so well. To be honest, they deserved the win and I suspect if we'd been playing f2f they wouldn't have made their fatal mistake.
This really is a fascinating game and Tim and I both pondered how we might design some other scenarios (I am drawn to some WW1 trench warfare ones), but getting the interactions right between the various options is the sort of thing which makes my head hurt. Great stuff, very enjoyable.