Battle of the Alma

Simon put on a Crimean game as a tryout for an interesting set of rules called La Belle Epoque. They are aimed at Army level engagements and the elements are brigades or divisions. They have a particularly interesting approach to artillery as it is factored into the units themselves, rather than appearing as a  separate type of element. This solves one of the dilemmas of artillery representation in this level of game as it models the batteries being distributed between the regiments, rather than 70 artillery pieces being shown as one model and a handful of gunners. 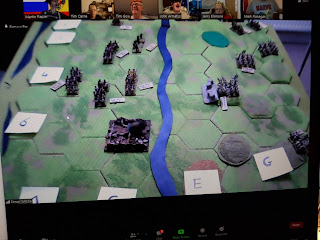 The Alma from the west. The heroic defenders of the motherland are on the right, while the wicked invaders are over on the left. In the interests of simplicity Simon left the French and Turks out of this scenario.
Each hex is a kilometre and in this scenario, the units are divisions. Myself, Tim G and Jerry took the Russians, while John, Mark and Tim C were the British. I had the bulk of the infantry, Tim the cavalry and Jerry directed operations. 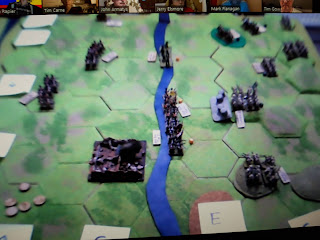 The British ponderously marched forward and began fording the river, while we moved some of our chaps up to better positions. Both sides draw chits to determine the order of unit activation, then roll an activation dice to see what the unit can actually do. This can be topped up from a small pool of command points, and in this case Jerry prioritised getting the Borodino Regiment onto the hill at F2. Units which fail their activation roll can just move one hex and not fight.
This worked very well and introduced a satisfactory level of friction, similar to that generated by the various card driven activation systems we use. 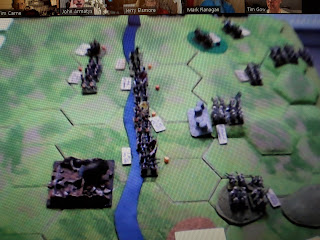 The British eventually got most of their troops lined up along the river and conducted some long range gunnery. They managed to drive off one my units which charged the enemy as they crossed the river, but discovered that shooting uphill against fortifications was rather ineffective. Meanwhile the Russians fired back from their entrenched positions, inflicting enough losses that the British dropped a command dice (you get one command roll per 8 stands). 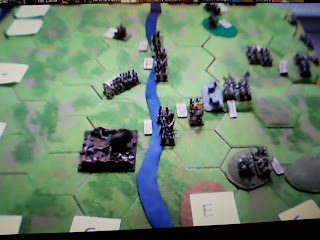 Desperate times call for desperate measures and the Highlanders surged forwards. They were beaten off, losing two of their three stands. 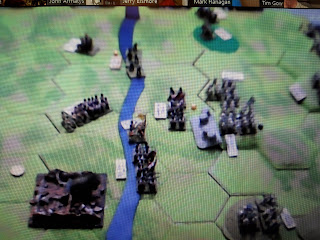 Then it was the turn of the Guards division. They were made of sterner stuff and parked themselves next to the redoubt, then beat off another Russian charge. 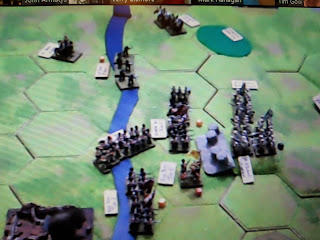 Not to be outdone, the remaining Highlanders marched forwards again. It will look good in the film at any rate. This made enough room so the Light Division could also cross the Alma.
In the far distance the Light Brigade faced off against the Russian cavalry, while British artillery and rifle fire gradually chipped away at their strength. The divisions could shoot a long way, which modelled their attached artillery batteries. 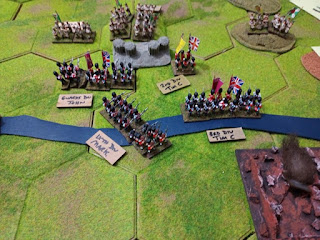 We broke for the night at that point, and Simon took some pictures. View of the redoubt from the British lines. You can see the very nice 18mm figures much better in these. 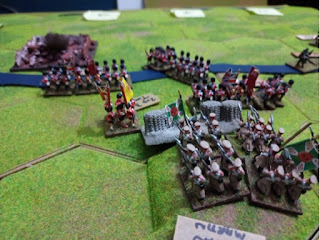 The entrenched Russians holding off the British hordes. 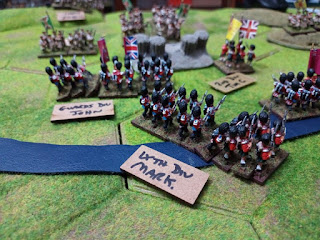 The units all had individual labels to aid recognition. 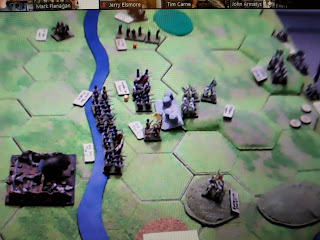 The Briitsh were drawn to the redoubt like moths to a flame. Over in the top of the map the Light Division are busy shooting the Russian cavalry out of their saddles. The British command advantage is now showing and they are getting their units to activate for fire more, and gradually whittling the Russians down. Even the defenders in the redoubt aren't immune to close range cannon fire. 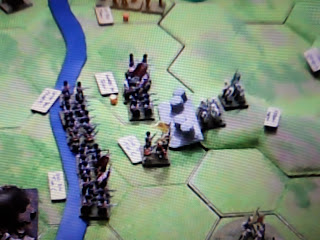 The redoubt is reduced to two stands now. 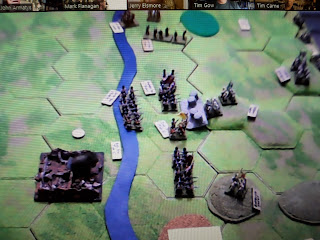 The light Brigade crosses the Alma in the north. 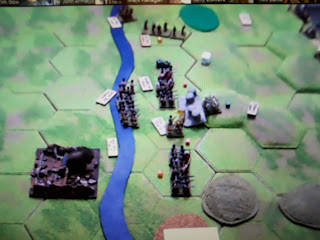 And after another furious turn of British firing, the remaining Russian units are swept away, apart from one lonely stand in the redoubt. The British 3rd Div pushes forward, aiming to outflank the fortifications on the hill. 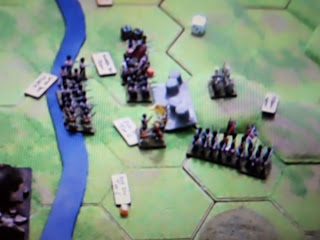 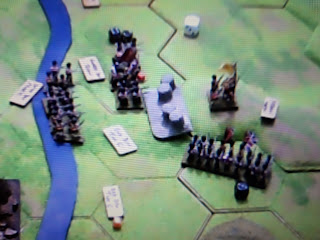 The Highlanders finally storm the hill. Hurrah!
And with the the Russians melt away to fight another day, and the British all slap themselves on the back with self-congratulation.
That worked really well, and I'd like to try it with some other nineteenth century periods, particularly my favourites of the APW and FPW. My only slight reservation is that if units fail to activate, they can't fire, which can lead to the side with inferior C3 just sitting there and being pounded, however it is quite a clever way of modelling command differences. I suspect in a larger scenario with a dozen units a side it would be less noticeable, and units which are assaulted do get to fight back whatever their activation scores.