Like their BEF pals, I thought my 1940 French could do with some larger scale air support. It turned out to be surprisingly difficult at a sensible cost in 1/144th. £30 for one Curtis Hawk? No thanks.

So my thoughts naturally turned to a cheapskate bodge job, and peering at various photos of fighters it occurred to me that the Mig 3 bore a distinct resemblance to a Dewoitaine 520. The long nose /short tail configuration seemed quite popular in early monoplane fighters.

Soon one cheap-as-chips Zvezda Mig 3 arrived and after a degree of bodging took to the skies as this. 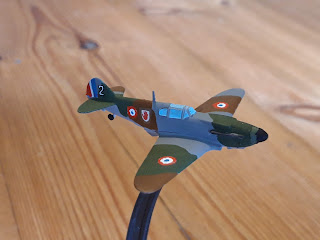 Here goes the D. 520 off to down some Heinkels, or be captured and repainted by the Luftwaffe. The Mig 3 is a lovely little kit which I have already reviewed. In the end it didn't need too much bodgery. The main thing was squaring off the tail and rounding the spinner. I couldn't do much about the canopy, which had a slightly more domed appearance, but it was close enough, and had the little semi circular inlets at the back already. 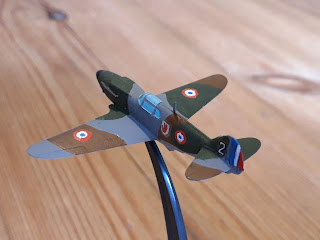 I finished it in grey/green/brown three tone camo, which looks nice and is very different to other planes of that era. I don't have any French decals, so I painted them on, which took a degree of patience and some touching up. I very cleverly painted the tail flash the wrong way round and had to redo it. 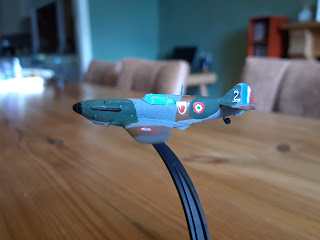 The plane number came out of the decal box, and is Russian in origin. The squadron flash is actually from an Emhar Mark IV tank! The decals tidy it up a bit though and look rather smart. The nose profile isn't quite right as the top should be level with the spinner, but it is close enough for gaming.
I was rather pleased with that, I just need to design a game to use it now!