After the Republicans captured Teruel, Franco cancelled the Gualajara offensive and moved large numbers of troops to the Aragon front to regain the lost ground. The counter offensive started in February 1937, and within a few days the Republican front had been pushed back. The Republican high command committed the International Brigades to the defence of the city, while General Varela led the attack with elements of the Army of Africa supported by Condor Legion bombers. 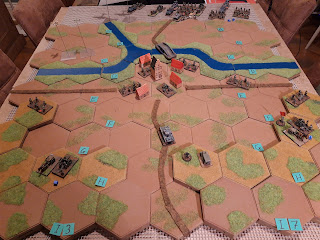 The Republican defensive positions in and around the city. Varelas columns are massing to the north. 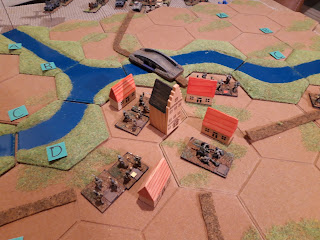 Teruel is held by three International Brigade (IB) battalions, supported by a light AT gun company. 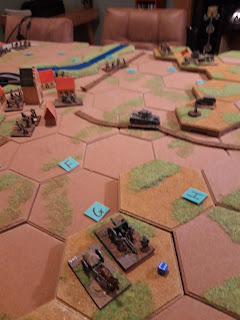 On the left is a field gun gruppo, supported by another IB battalion. 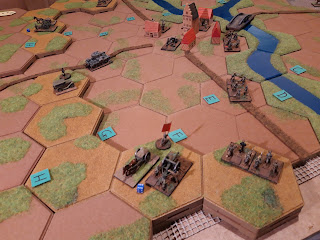 On the right, two more battalions, supported by another artillery gruppo. Colonel Heredia is with the guns here, sited for direct fire across the river. 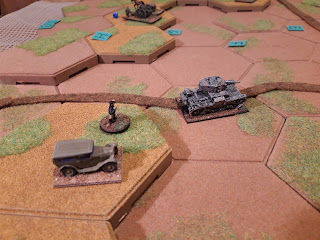 The Republicans have a company of T26 tanks in reserve on the road to Valencia. Ernest Hemingway is observing the scene from the heights. He obviously got up a bit earlier this time. 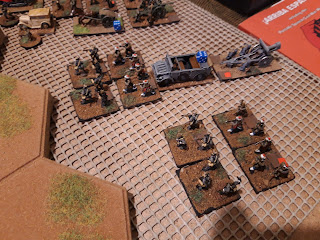 Varelas 1st and 2nd demi-brigades of Legionaries and Regulares, supported by an (elite) heavy artillery gruppo. 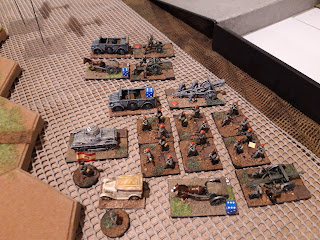 3rd Regiment (three battalions of Requetes) plus three more artillery gruppos including another heavy gun. In the far distance is a Condor Legion motorised AT company, and the column is led by a Legion Panzer I company (with 20mm autocannon), plus General Varela and Kim Philby eager to keep his readers up to date, 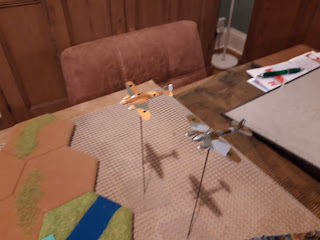 The Condor Legion. I think we saw these guys last time. 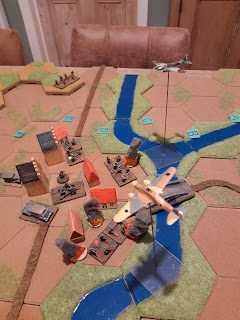 The Battle started with Varela ordering the bombers to plaster the defences in Teruel. Planes are more effective in 1938, and a torrent of bombs landed on the unfortunate town. As Russell observed, something for Picasso to paint. Hemingway was on hand to record events (he is standing next to the AT gun). 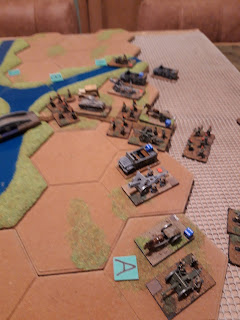 This was rapidly followed by a full Regiment of Carlists marching straight up the road, accompanied by the Legion tank company and Kim Philby. The fearsome Nationalist artillery also rolled on and unlimbered in a continuous gun line. The Condor Legion AT company pushed their Pak 36s through the river. 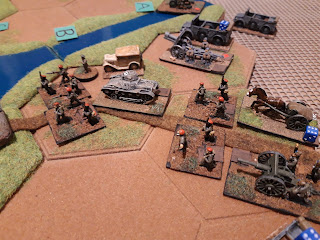 The Carlists column. Philby is up at the front. As before, the guns are limited to six shots. 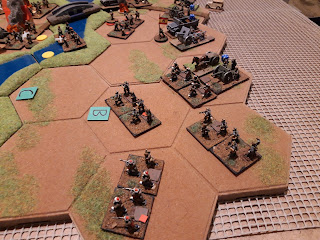 Over in the east, John's two Legion demi brigade columns came marching on. These guys were quite tough. 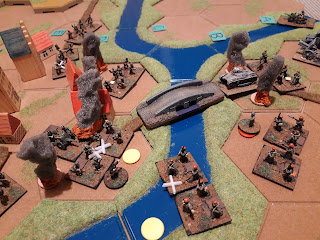 The Nationalist guns opened fire over open sights at the city while the Carlists  flung themselves into a frontal assault to pin the defenders. The Republican guns laid down a defensive barrage and the first assaults were pinned down or repulsed. The AT gun drove the Panzer back (and apparently Hemingway is directing the defence!). In a shock development, Kim Philby was wounded in the exchange of fire. 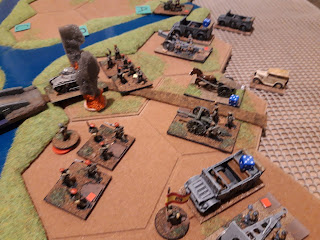 By now General Varela was personally directing the artillery fire. The Nationalists leadership advantage gave them an edge in managing the turn sequence. 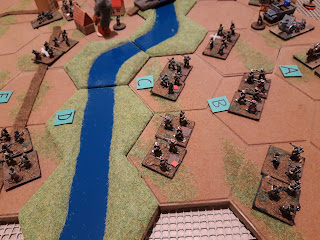 John's Legionaries now lined the river as the IB battalions moved up to contest the crossing. 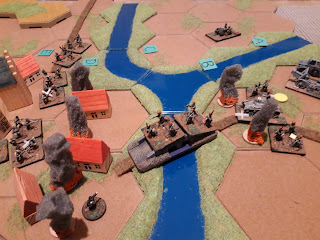 The Nationalists guns cleared the front of the town (the Republicans chose to retreat instead of taking hits) leaving just Hemingway to face a Carlists column rushing the bridge. The rest of the Carlists were pinned by artillery fire. 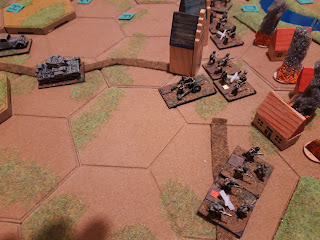 The battered IB soldiers grimly hung on. The photos don't really capture the ebb and flow of the individual units as they advance and retreat - that is a feature of the PW I really like. 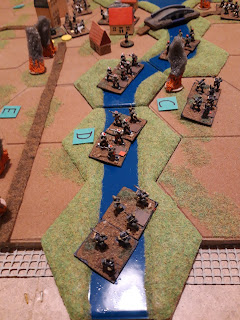 The Legionaries waded into the river behind a barrage. 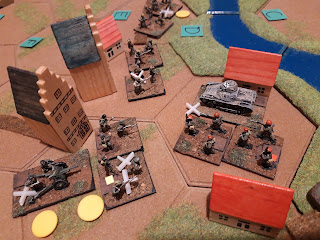 While the Carlists and Panzer forced their way into the town. The Republican defenders and their supporting AT gun were pinned. Eagle eyed readers will note that I let tanks and guns stack with an infantry unit. Another modification, which I think is more realistic at this level of game. 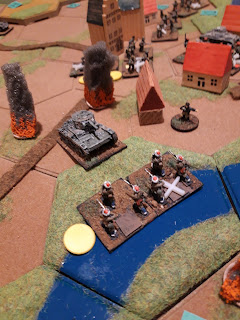 Some of the Regulares had been pinned by defensive fire, and the Republican tanks took the opportunity to assault them, driving right through the barrage. It was all very dramatic. I give tanks +2 assaulting unsupported infantry in the open. That is what tanks are for. 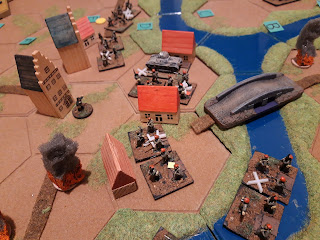 More Carlists pushed into the town and eliminated the infantry/AT gun position. The Republicans were left just holding the southwest corner (apart from Hemingway) and their losses were now sufficient to exhaust them. 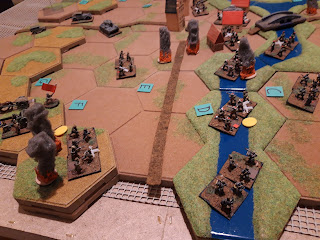 The Republicans were managing to hold off the river assault, but the T26 company was forced to retire by the Nationalists guns. Now they were exhausted, that left them out of the fight. The Nationalists were now five hits away from their exhaustion point. 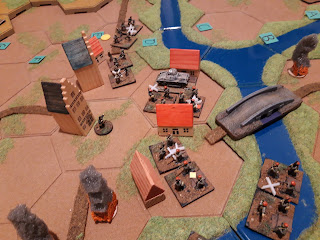 The Republicans blazed away but only managed to chip another hit off the Nationalists. We'd pretty much run out of time by now and it is a shame we didn't have time for another turn or two. The Nationalists were only four hits from their breakpoint and still had to clear the last city hex, so it was very much undecided, however I think the odds were still with the attackers. 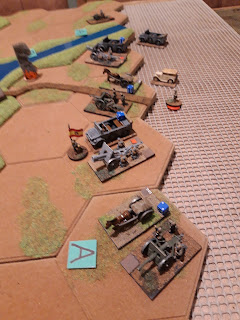 The Nationalist guns were down to their last couple of shots each, but that was still a potential eight barrages to hit the last Republican town hex. The Nationalists were far more aggressive with their guns than I'd been in playtesting, and their massed fire over open sights was decisive. 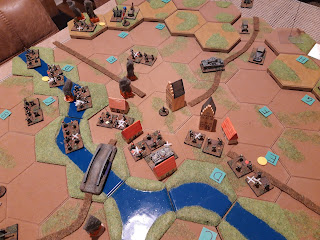 At game end, the Nationalists have a good hold on half the town and all the remaining Republican infantry are damaged and half of them pinned. 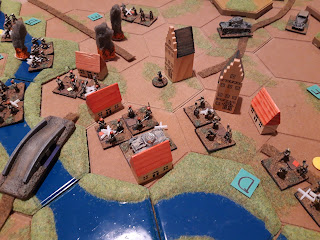 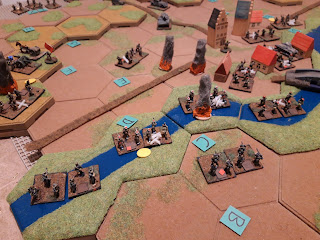 The river crossing is making slow progress as the attackers keep getting pinned down and suffering losses. Another couple of turns of that and the Nationalists will reach their breakpoint.
Shame we had to end when we did, as having written it up, I'm less convinced the Nationalists can take the city before their breakpoint is reached. It is almost worth setting up the situation again and playing it solo.
Anyway, as with Part 1 of the campaign, it all rattled along fine without any great problems. There are probably some more tweaks I could play around with (I'm still not very happy with how pins work) but it seems to work fine as is, so I'll probably leave it alone now. There was a fair amount of kit there (23 units excluding HQs etc), all operating independantly rather than as formations, and we got through it in an hour and a quarter. So pretty impressive really.
Posted by Martin Rapier at 23:24