Blimey, after a two year gap I finally made it to a proper wargames show! Namely, Partisan, at the Showground near Newark. I had a running event in the morning so I didn't make it until after lunch. 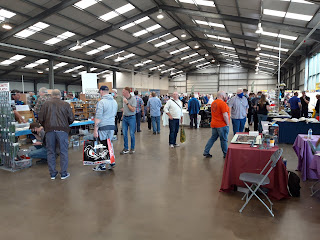 It was still quite buzzing when I got there. The pictures don't really do it justice, but it felt pretty busy. 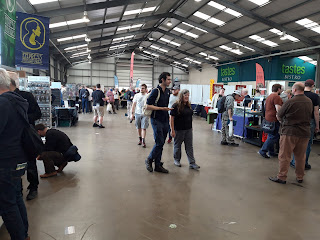 I gather there were over a 1000 people through the door, plus all the traders, people running games etc. So a good turnout.
As usual at Partisan, it was split into a demo games section and a participation game section, with prizes for both.  The Duncan MacFarlane Shield was a particularly poignant prize. 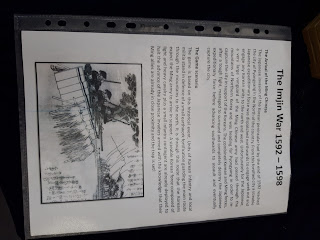 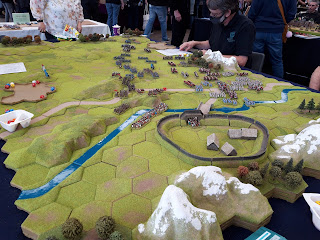 This was the Kallistra show game to highlight their Hexon terrain system. Set during the Imjin War in 1592. 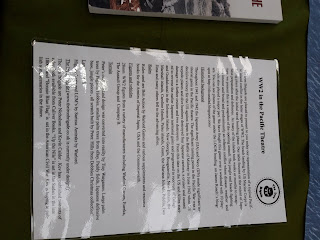 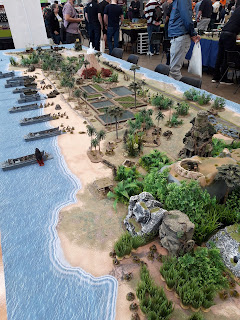 There was a gorgeous WW2 Pacific War game which caught my eye. It featured an entire atoll. 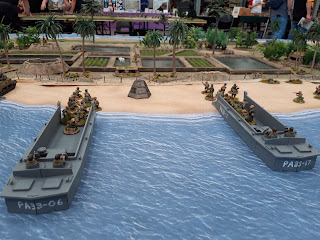 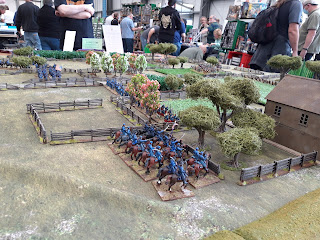 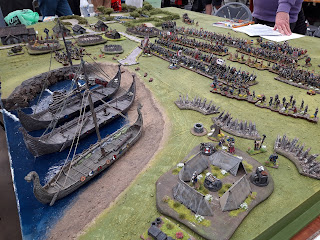 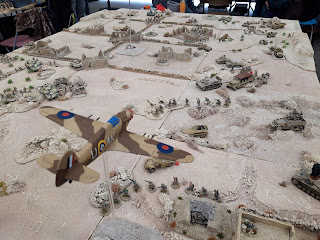 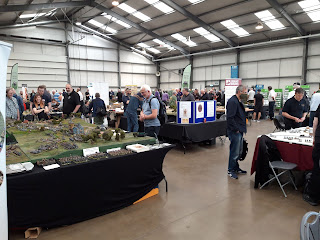 There was maybe a score of demo games? Perhaps more. It was pretty lively at this end of the hall. 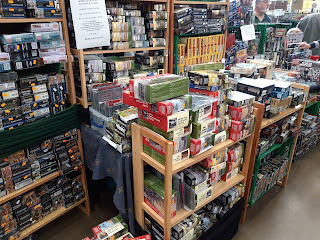 Most exciting of all, there were actual traders selling actual stuff. It certainly beats peering at photos of toys online. I had a good rummage through the offerings on display and may have bought one or two things. Ahem. They will appear on the blog in due course. 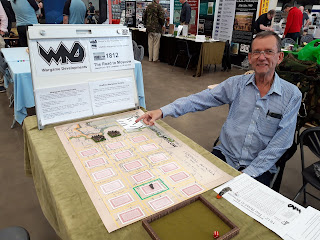 Stars of the show, were of course Wargames Developments Display Team (north). Aka, Tim, Tim, John, Simon, Diego, Russell et al, my regular gaming buddies. This was Tim Cs '1812' game, covering Napoleons campaign in Russia. In ten minutes.
This was the show game we'd planned for last year, but of course Covid got in the way. It was its first outing in public, and highly successful it was too, with eighteen playings, or which the French managed to win (as in defeat Russia) five times. The rest of the time Napoleon managed to escape Russia with some of his army, but on one ignominious occasion, he was captured by Cossacks. Oops. 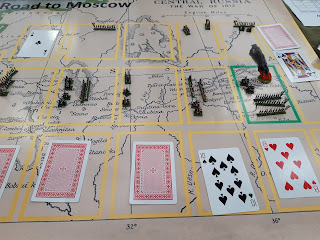 I had a run through of the game. Sadly my efforts to persuade Alexander to surrender came to nothing, despite smashing the Russian Army at Smolensk. We hung around in Moscow for a while, but some dastardly scoundrels set the city on fire! Time to retreat, and I chose the unravaged northern route. It was a bit chilly but at least there was something to eat along the way. 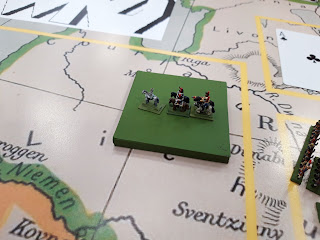 Napoleon straggled back to Poland with two bases left out of the 30+ he'd started with. Well, a historical result at any rate. 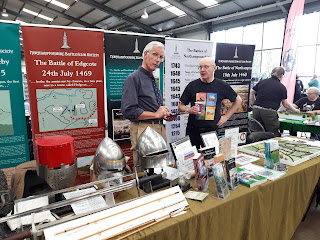 Nearby with the Northamptonshire Battlefields Society were our good pals Chris Kemp, Trebian and YesThatPhil, who may be familiar to people in the wargaming blogsphere. We all had a good chat and set the world to rights.
I really enjoyed that. Although I've been out a fair bit since lockdown restrictions were eased (cinema, theatre, restaurants, bars, exhibitions and galleries, plus various sporting and re-enactment events), it was far more exciting being at an actual show than I'd anticipated. Hard to put my finger on it, but I guess it was just the combination of people, shopping and gaming, always a winning combination.