In a change of pace, Mark and Ian brought along a very modern, indeed ultra modern, wargame covering current challenges around military satellite operations. This has already been around various professional and hobby wargaming events and I'd seen an early prototype at COW in 2019.

It covers the space information war between the west and our more authoritarian opponents further east, and is principally a resource management game with the aim of gathering a decisive intel advantage over the baddies, while protecting our own assets. This is what WW3 looks like, along with the continuing battle against bad actors in cyberspace (and with which I am rather more familiar).

Essentially the blue player team gets to fly around various satellites looking for important stuff, while blocking the red team attempts to do the same. There is only a limited amount of satellite resource and analyst time which can be allocated to the info war, so it isn't simply a matter of flying around taking photos of the entire globe, nor are the physics of satellite orbits particularly simple.

In our game, we were the Blue (west) team with Tim G in overall command, Tim C as offensive ops director, Russell as defensive ops director and me, John and Jerry as intelligence analysts doing the satellite plots. The Red team were scripted.

As the IP belongs to other people, I can't show many images of this unfortunately, so this will be abit if a 'wall of text'

The globe is represented as a stylised map with critical strategic areas, however each satellite track is mapped closely onto the corresponding areas. There are half a dozen different satellite postures, and within those, anything up to a dozen different tracks for each posture. That is a lot of offensive tactical options. Each posture and track option consumes resources (or 'energy') to operate and change, and there is only a limited amount to go around. Some postures, like geostationary, consume high amounts of energy. 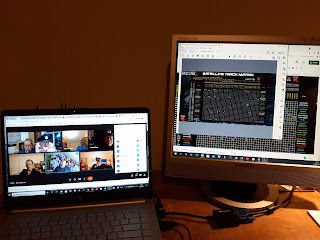 There was a lot of stuff going on, so I had to use two screens and multiple windows. Some of the participants struggled a bit with information overload. Along with figuring out the best track for our own satellites and prioritising areas for inspection, we also had to deploy anti-satellite measures to defend our own assets. Our really high value targets were in North America, Japan and Australia, so we deployed passive defences in the US and Aus, with an active anti-satellite defence system in Japan. These also cost energy to activate.
As someone who likes lists, I found the single most useful bit of information was a table with the targetted regions for each different satellite posture and track, as well as an indication of the satellite loiter time in each location. This was really, really useful for plotting our satellite sweeps. As satellites have to obey the laws of physics, you had to make hard choices each turn about their deployment.
We started off focussing on the Soviet Union, oops sorry, Russian Federation with a High Earth Latitude Orbit (HELO) posture. Not much luck here, but we did also pick up details on a major Arctic volcanic eruption which was disrupting communications and travel and earned us some VPs.
The Reds had gone for a rather eccentric Molnya orbit which had high loiter times at the apex. They were clearly stooging around the US, but unfortunately they also got to overfly Australia. Who decided to put all our good stuff in those locations? We fired up the passive defences in those regions which would degrade any intel the Reds might gather.
So it went on. It took multiple passes to get good intel and some of our efforts were disrupted by solar activity. In the end we had a good look at Russia and China and had certain identification of a couple of major assets, and a probable on another. We also had a reasonable idea of where the Red team had been looking.  We got VPs for the assets we'd identified, both Red Team and the various 'world events' like the volcano mentioned above. Then came the fun part, we had to deduce the accuracy of the partial sightings. Luckily we only had one, and had enough info to figure out its value (if you got it wrong, you lost points). Then we had the really hard part, working out which of our own assets had been compromised. If you got this wrong the penalties were very harsh indeed (as relocating your entire strategic missile system is a bit expensive), and much discussion and head scratch ensued as we tried analyse the Red search patterns. I really enjoyed that bit, it actually felt like being an analyst. In the end we got some right and some wrong, more right than wrong and of a higher value which bumped up our VP total and easily trumped the Red team who it turned out had only ID'd one of our assets (and that when we didn't fire up the ASAT defences for some reason).
So, a great victory of liberal democracy, and a really interesting session.