Mark put on a One Hour Ancients game, featuring Spartans vs Athenians (plus various hangers on). The Athenians had landed on some far flung beach, and the Spartans rather objected. This was played using the standard OHW Ancient rules rather than a modified version. 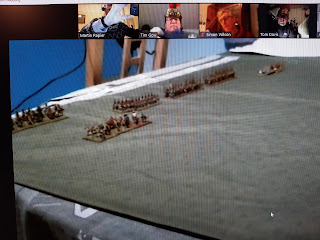 Tim, Simon and I drew the mighty Spartans. We had three phalanxes (including two of rather dodgy allies) plus some slingers, a unit of archers and unusually, a unit of cavalry. Tim took the hoplites, Simon the cavalry and slingers while I got the archers.
We deployed in a fairly long formation, hoplites in the middle, light troops on the ends and cavalry in reserve on the right flank. Like many Ancient battles, our deployment was what largely determined the eventual outcome. 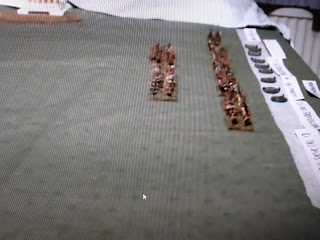 The wicked Athenians had four units of hoplites (ouch) and two of light troops. They opted for a compact deployment with all four hoplite units grouped in the centre and their light troops out front. Their ships are visible on the beach to the right. John, Jerry and Pete played Cleon and his pals. 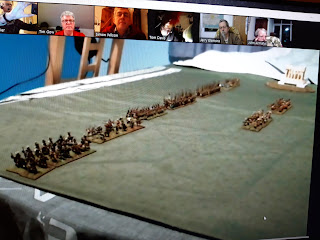 Both lines rolled forwards. The temple in the far distance was impassable, which protected both sides flanks in this sector, although my mercenary archers had the option to occupy it. The Athenians had a huge gap on their left flank though, so unsurprisingly, out cavalry galloped forwards to take advantage of it. 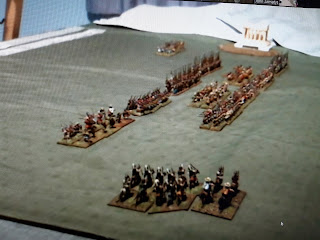 The Athenian hoplites rolled up behind their skirmishers, while our own hoplites also rolled forwards. Our light forces opened fire from the flanks with little effect against the well armoured enemy (although the archers did score a couple of hits). The cavalry meanwhile galloped around the open flank and wheeled inwards. 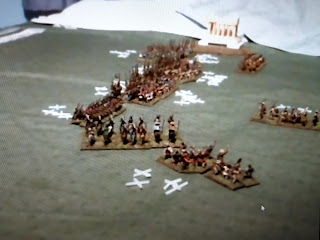 The lines of hoplites engaged and the Athenian light troops fell back. The Athenians outflanked our shorter line near the temple, but this was an opportunity for my archers to hit the Athenians exposed flank as they wheeled round, which they duly did.
Over on the other flank our slingers secured the flank  and engaged the enemy lights at long range. Our cavalry meanwhile fell on the Athenian flank while it was engaged frontally, and after a short struggle, the first Athenian phalanx was fleeing for the rear. The Athenians would have been better using their light troops to screen the flanks of their hoplites, at least it would have held the cavalry up a bit. 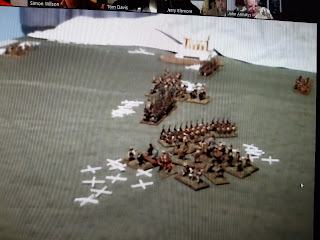 This in turn enabled our own hoplites to advance and crush the Athenian light troops with flank attacks. Meanwhile the cavalry worked its way along the Athenian line, wiping out each phalanx in turn, while the enemy was pinned frontally. The only thing which went wrong was that my archers finally succumbed to  last Athenian hoplite unit, but they had so few hits left that the cavalry would have been able to make light work of them.
We called it there as with all their hoplites destroyed or crippled, the game was up for the Athenians.
Well, that was a quick and decisive game, almost a version of Cannae as our more extended forces enveloped the enemy, although it was more touch and go in the centre than the narrative highlights.
I do like the One Hour Wargames rules, they are very unforgiving as there are so few units so each decision is crucial.  Once the Athenians were pinned frontally, they couldn't withdraw unless they defeated the opposing unit (a slow process against armoured heavy infantry) which essentially gave our cavalry a free pass to ride down the line slaughtering each unit in turn.