Each team takes on the roles of members of a tank crew (commander, gunner, loader and driver) and then proceeds to stalk their opponent over a congested battlefield. The players can't see the enemy  unless they come into view, so looking in the right direction is quite important....

Screenshots are thanks to Jim, I was too busy peering though my gunsight to take any pictures! We were in Red tank (which turned out  to be a T34), John was the commander, Tim G the driver, Mark the loader and I was the gunner. 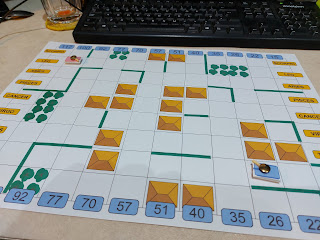 The battlefield used a grid to regulate position, movement and direction. The tank positions are Jims best guesses (he was in blue tank and was uncannily accurate in guessing where we were). The various buildings and woods obstructed LOS and blocked movement, while the hedges were passable, at some risk. 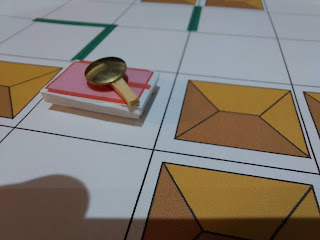 Off we went. Each segment was 15 seconds  in both game time and real time - the umpire said go, and we all said what we were doing. The commander gave us his intentions, and the crew did specific things using the correct syntax and terminology.
So e.g. a valid fire order was <target>, <location>,<ammo type>, FIRE! Assuming you had actually picked the right spot and the ammo type indicated matched that actually loaded in the gun (the loaders job) then dice were thrown to determine the effect.
The poor old umpire then had to sort out what happened, and to avoid utter confusion, we very rapidly determined a sequence of speaking to avoid babble. It was just possible to get through it all in 15 seconds. 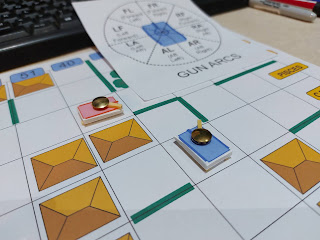 One of my jobs was turning the turret, this handy picture shows the turret arcs, so a typical order would be <arc code>, TRAVERSE! You can only fire at things in arc. In this example, red could engage blue, but not vice versa. 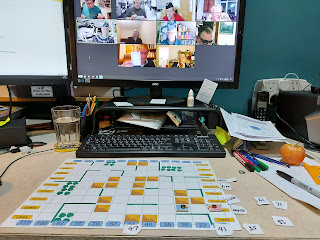 In the first game, after much driving around, we ended up facing off at point blank range. Whilst I attempted to shoot at the rather unexpected target, Blue tank decided the best tactic was to charge and ended up ramming us! I missed and they crashed into our tank and disabled it. Boo. 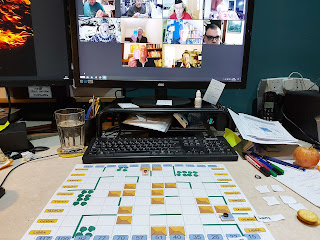 For the second game we were much more canny. Each tank crept around the table, then spent much time waiting to see if the enemy hove into view. After a while I figured out that they were trying to outflank us. 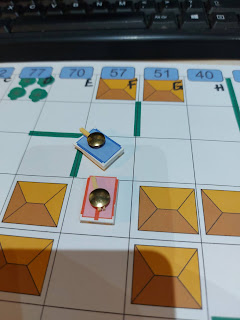 And lo and behold, we ended up like this. Unlike the photo, Id guessed where they were so Red Tanks turret was pointing due aft. 'Panzer IV to the rear!'. I popped off a shot and disabled the Germans with one shot. Great!
That was really good fun, the time limit made it feel extremely pressured and tense, and it really captured the thing that in tactical armoured combat, whoever fires first, wins. Which sounds simple, but as Clausewitz observed, in war the simple things are really difficult. It was hard work for the umpire though, and Tom did a sterling job of manging the chaos.
Posted by Martin Rapier at 23:20