We managed to see our kids for our state mandated one day of Xmas, and as they are both avid board gamers, managed to get through quite a few games. A new one for me was Munchkin from Steve Jackson Games. This is a sort of joke Dungeons and Dragons type game, but competitive rather than cooperative. 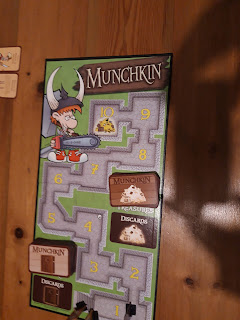 The board is a stylised Dungeon. Each level is represented by a 'room' and as you progress through the rooms, you automatically level up, so eg a character in Room 8 is counted as Level 8 and gets +8 in combat. Very slick and clever. 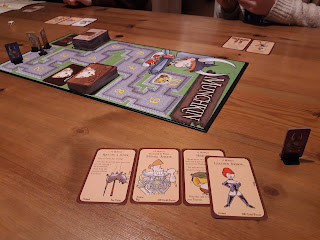 Characters have the usual D&D tropes - races, classes and of course piles of equipment. My character here has Mithril Armour (yay!), a rat on a stick which will come in handy for something and a minion with some leather armour. This is all determined by cards drawn from the 'treasure' you get from entering rooms and defeating monsters. 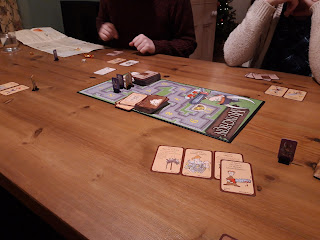 Off we go. Many of the cards are 'bad' (ie monsters, curses, traps etc),  ideal to play on other players. If you  find a room with no monsters in it, you can't level up, but you have the option to play ones in your own hand so it can be worth hanging on to a few monsters to ease your own progress. If you fight a monster, other players have the option to help out and share the spoils). Combat is very simple, add up all your bonuses, including single use items etc and compare with the monsters value. If it is higher you win. Simples. Until other players start chucking in bonuses on the monster...why would they do that you cry? 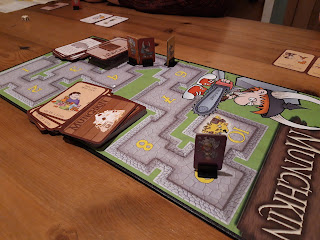 Well, in Munchkin you win by being the first to get into the Level 10 room. You can only do this by fighting a monster, and naturally the other players have an incentive to stop you. Here, by some miracle, my character has advanced all the way to level 9, while everyone else is stuck on level 5. I guess all those years of playing D&D, Runequest, Tunnels and Trolls etc must have been handy. 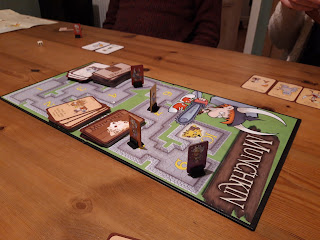 Naturally this was a cue for everyone to pour all manner of bad things on my poor Elf, which gave the rest of them a chance to catch up. 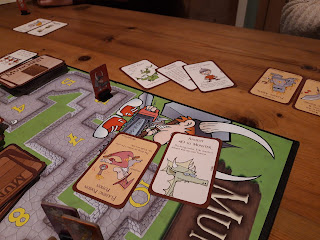 Various players rolled up to Level 10 and various almighty scraps ensued. Fortunately losing was mainly penalised by being knocked back a level or two if you failed to run away. Various magic items of classes helped running away if it all went horribly wrong. I managed to end up fighting the Level 20 Dragon, one of the few monsters which can kill you outright. Fortunately I had a magic ring to aid my retreat from that one! 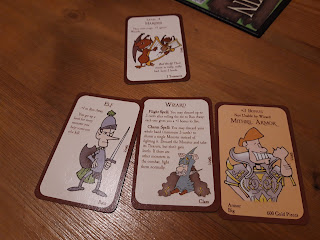 I ended up as an Elf Wizard (still with my Mithril Armour, yay!). We all had several attempts at getting into Room 10, burning out various curses etc along the way. Finally I got lucky and drew a monster I could actually beat and none of the other players had enough buffing cards to stop me, so I ended up the winner, more by luck than judgement.
Anyway, that was great fun and highly recommended. The Boardgame Geek entry is here: https://boardgamegeek.com/boardgame/1927/munchkin, but as it was released in 2001(!) I don't imagine it will be news to experienced gamers.