Inspired by Marks 'Clash of Spears' and Simons 'Hydaspes' games, I thought I'd take another look at the One Hour Ancients rules and backport some of the elements from my well tested WW2 variant onto them. I was also keen to persevere with the use of grids, as my favourite Ancients rules (Lost Battles and CnC Ancients) both use a grid to good effect and restrict some of the very silly wargamerish moves people like to pull with Ancient armies as if they were tank formations all under gps controlled command.

The easiest thing was retrofitting the 1/2/3 dice and six hit combat system as it maps onto the standard D6 plus or minus two system precisely. The harder bit was geometry as I didn't want a 9x9 or, heaven forfend, a 12x12 playing area. 6x6 requires some careful handling to replicate some of the subtlety of the ruler based rules in terms of the relative mobility of the various unit types. I got something workabe in the end, mainly by borrowing very heavily from the troop types and move restrictions. Good luck trying to get your heavy infantry to turn on a sixpence now!

I wanted an asymmetrical playtest scenario, and funnily the next one of my list of CnC Ancients games was Cannae, as asymmetrical as you can get with a nice range of troop types but nothing silly like elephants or flaming pigs. It wasn't too hard to convert the Lost Battles OB and deployment into something vaguely approaching a OHW scenario, and I borrowed the CnC Ancients 'victory banner' concept to avoid it being just a boring battle of annihilation.

After a couple of run throughs with both sides achieving victory (as Hannibal was heavily outnumbered Cannae was always a slightly dicey proposition for him), it was time to try it out on the long suffering members of Sheffield Wargames Society! 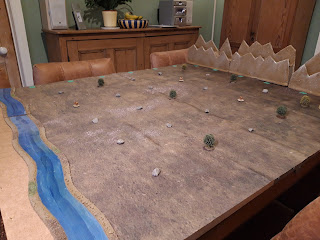 The battlefield. The River Aufidius in the foreground and the mountains in the background. I used the terrain layout from the Lost Battles scenario. The rocks, trees etc make the grid a bit more obvious. 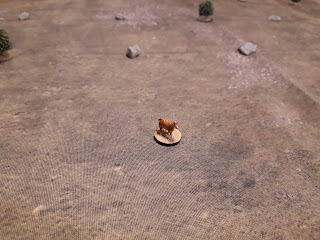 This was a rare outing for my 20mm goats (Irregular Miniatures). They joined the rocks and trees in marking out the corners of squares. 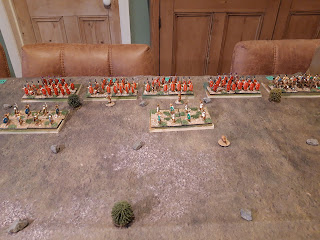 The mighty Romans. Tim, Pete and John were the Romans and their eight(!) Legions. Tim and Pete were Varrus and Pallaus respectively, while John had the cavalry and Velites. These are all my quad size 20mm DBA armies, mounted on my big 5"x3" movement trays. Mostly HaT plastics.
The eight Legions were represented by four units of Legionaries, each of twenty figures (eight Hastati, eight Princeps and four Triarii each). The Velites were as many Velite figures as I could cram on each base (eight in each case), and half a dozen Roman cavalry completed the mounted contingent. Each unit represented approx 12,000 infantry or 6,000 cavalry (fewer for better quality units, more for worse quality ones). 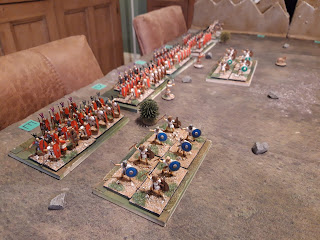 The Romans from an angle. Varrus and Pallaus are leading Legions on foot. They look rather Featherstone-esque I think. The Romans didn't have much option but to adopt their historical formation, a big block of Legions in the middle, Velites out front and the cavalry on the flank. That was how the Republican Army was trained to fight, line up and chop forwards. A big mass of Legions together is a very scary prospect, lots of combat dice and armoured as well. Imagine an entire division of Tiger tanks... 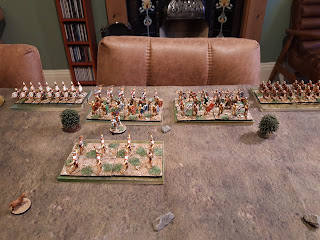 Simon, Mark, Jerry and Tim C were the polyglot Carthaginians. Simon was Hannibal with the Balearic Slingers, Tim got the Gauls, Mark the Carthaginian Heavies, while Jerry was Hasdrubal and got all the veteran cavalry.
The Carthaginian Army was a bit harder to model, as I was keen to allow them to adopt their historical deployment so I was very generous with the veteran Libyan infantry and gave them two units of heavies (only representing a few thousand troops each). I just put four bases of Libyan infantry (16 figures) on each. The light infantry were easy, I just gave them a unit of Balearic Slingers.
The Gallic Allies were the hardest. Lost Battles just has them as average heavy infantry, CnC as a mixture of Warband and Auxilia. In the end I plumped for two units of Warband as it would allow the Carthos to set the pace of combat in the centre, but I should have probably have gone with one or possibly two units of Auxilia instead. 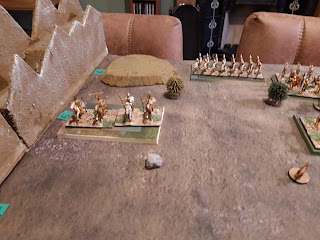 The Numidians on the Cartho right. In standard OHW there is just 'cavalry' but there is such a tactical difference between the employment of light and heavy cavalry  that I added a new Light Cavalry type. These are essentially fast skirmishers with a longer range and in the playtests could hold their own very well against normal cavalry through a combination of shooting and running away. I might try out a Carrhae game and see how it goes. 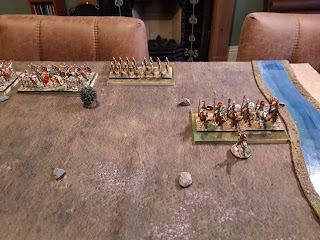 Hasdrubal on the left, just a couple of bases of Carthaginian Cavalry. These are all plastic 20mm figures apart from Hannibal and Hasdrubal, who are Newlines metal figure. The plastics are predominantly HaT but the Gauls include Italieri and Airfix. 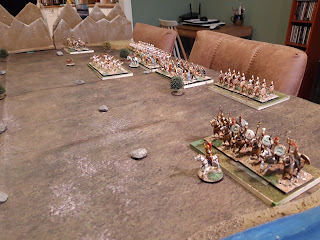 The Carthaginians looking rather grand. The Romans had more combat dice and more armoured troops but I rated Hannibal and Hasdrubal as better leaders so they had the option to add an extra dice in combat. Hannibal was also rated as 'brilliant' so once per game he could switch the turn order. Thanks for that idea Lost Battles. Unlike LB or CnC, I couldn't really reflect the C3 advantage the Carthos had, so this was the best I could do within the limitations of the OHW format. 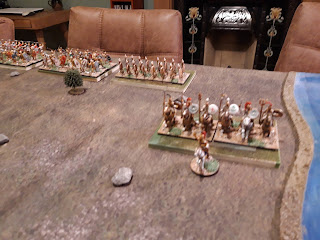 Hannibal opted for the historical deployment. So a weak centre (Gauls), Libyan heavies flanking them and cavalry on the flanks with the heavy cavalry down by the river. The original plan was to pull the Romans into the weak centre, then envelop and smash them. Lets see how that works out. 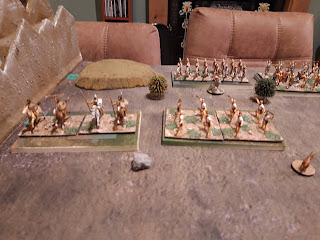 Hasdrubal and the slingers meet some goats out on the left flank. 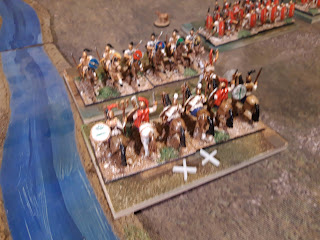 First blood to the Romans! The Roman cavalry manage to get a charge in on Hasdrubal and inflict two hits. The Legions are pushing forward aggressively. 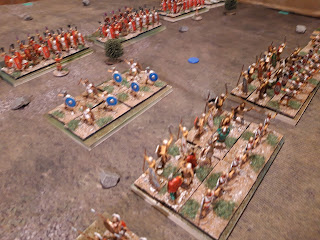 In the centre the Gauls close in on the Velites. The packed bases look rather imposing, but fortunately the blurry camera prevents a close inspection of the chaps with no trousers. 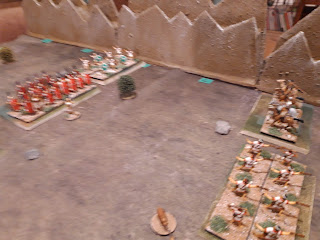 A bit of skirmishing on the right as the Cartho lights hurl missiles at the Romans (the massive shooting ranges assume the light troops are dashing forward then falling back to their supports, what a clever idea of Mr Thomas). 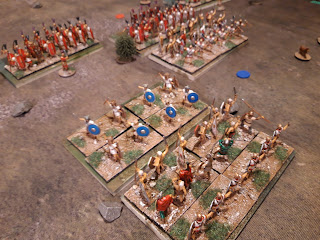 The Gauls pile into the Velites and one of the Legions, taking advantage of their ability to double time into combat (ie move two squares). 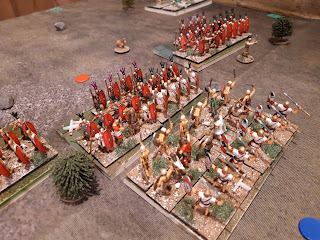 Amazingly the lightly armoured Gauls inflict two hits on the Romans while only suffering one in return. The big blue blob is the Romans objective square (counts as an extra unit destroyed if they take it), the red one is the Carthos. Another clever idea from Lost Battles. 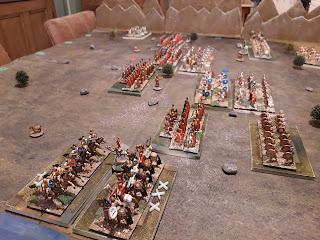 The lines are looking a  bit ragged as the heavies close in. 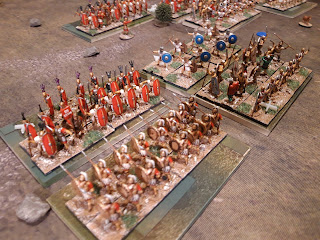 The Libyan veterans and the Legionaires finally make contact. Meanwhile the Velites and Gauls continue to trade blows, despite the 3:1 combat advantage the Gauls have. 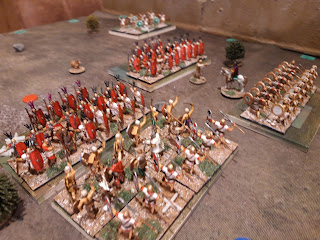 While the Gauls hang on in the centre, Hannibal leads the other Libyan heavies towards Pallaus. 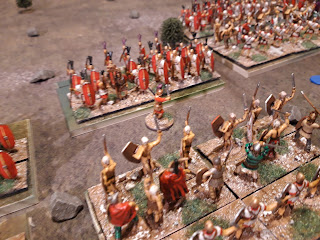 In the centre, the Velites finally break and Varrus finds himself face to face with a load of angry Gauls! At this point, Hannibal unleashed his 'brilliant general' ploy and the Carthos get two turns in a row. 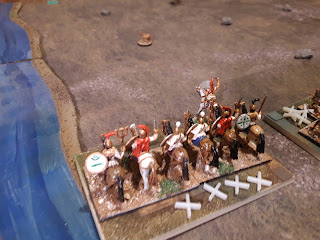 The turn flip flop allowed Hasdrubal to finally break the Roman cavalry. Hasdrubal had consistently led from the front, at some considerable personal risk and it paid off, although the cavalry was left a bit ragged with four hits. 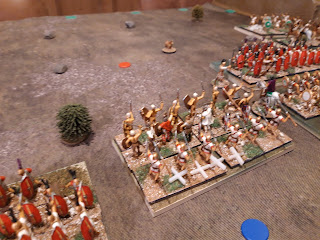 In a shock development, the Gauls also managed to rout the Romans holding the Carthaginian objective square. This really was unexpected, and the Romans really were appallingly unlucky here,  but suddenly the Roman centre is looking very vulnerable. Not much you can do against a triple six. 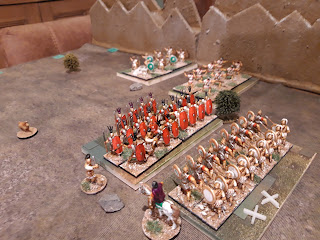 Hannibal engages Pallaus frontally while the slingers slip around their flank. They are pinned by the Velites however. 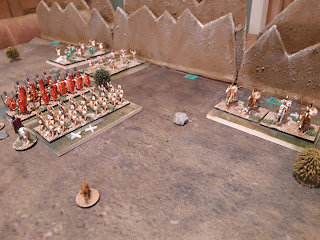 The Numidians fall back into reserve, ready to dash to whatever sector is needed. 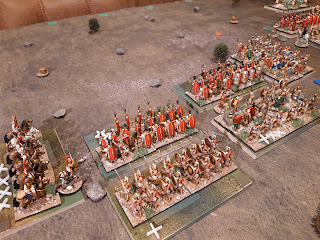 With their flanks exposed Varrus and half the Roman army is now enveloped on both sides. Things aren't looking too good for the Romans. 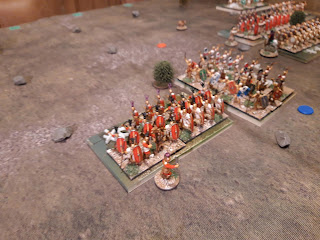 Varrus sends the Gauls to his front packing. 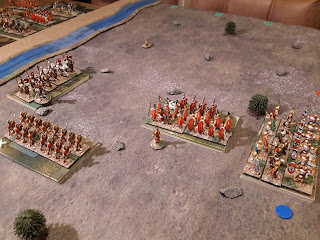 But it is too little too late, and as more legions break and run, Varrus is left isolated and surrounded by Carthaginian units. 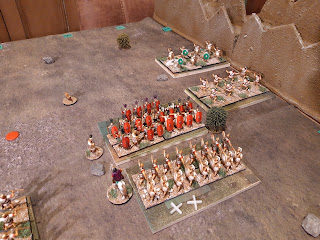 The Roman left wing is in slightly better shape, but still pinned in combat by no less than Hannibal himself, so its prospects of escape are poor.
We called it a day at that point as there was very little the Romans could do to stave off annihiliation. I've generally found the OHW Ancients to be one of the faster rules variants as once the units are engaged, it is basically one huge close combat which goes on until one side runs for it. We wrapped the whole thing up in about an hour, which with seven players wasn't bad going. 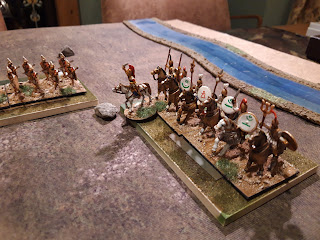 Man of the match was Hasdrubal whose personal bravery unhinged the Roman right flank.
That all went pretty well. There was a bit of confusion about the double time and break off rules, and I need to have a think about how better to express my intentions within the constraints of two sides of A4. Unlike the playtests, Hannibal managed  not to get killed this time, and used his double turn 'special power' to good effect. I know the combat system works as we've tested it so extensively with the WW2 variant, but I was pleased with the square based movement. Light troops had a definite mobility advantage without it being overwhelming, and heavy troops were restricted but not rendered completely inert.
I think the main problem is that which dogs all combat heavy Ancients sets - once battle battle is joined, there is very little for the players to actually do except roll dice. Lost Battles and CnC at least give the players some options each turn, but OHW doesn't have a sophisticated activation system so for the Romans at least, once they were engaged in combat, all they could do was hope for the best. The Carthos had more options as they had a more mobile army and could dictate the pace of the action. For what it was though, it worked fine and I was pleased with it. We also achieved a vaguely plausible result in a reasonable amount of time, which is always good.