Hot off the painting blocks is a 15mm Fallschirmjager battalion (at one stand = one platoon). It will also do as an FJ Regiment for one stand = one company games, and a full division for Megablitz etc.

This is the one of my new season painting projects, and one I've been meaning to do for a while. I already have far too many 15mm Germans wearing different uniforms (early war and late war infantry, panzergrenadiers, SS etc) but FJ turned up all over the place and I've a couple of scenarios in mind where it would be nice to use the right toys. 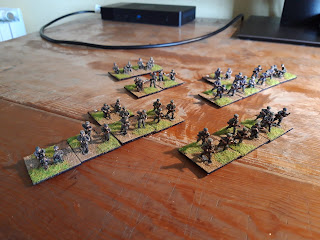 Here is the whole battalion. Three rifle companies, plus a heavy weapons company with a couple of tripod MG34s and 81mm mortars, battalion HQ with two stands and a couple of engineer platoons. 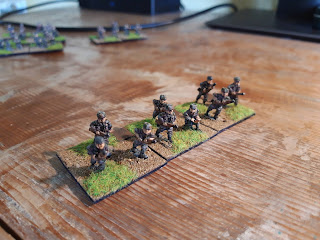 1 Company. These are all Peter Pig, the newer sculpts which are rather slender but still with a pleasing heft to them. As I wanted these to be good for the whole war, I've done them as 'Green Devils', mainly in olive green smocks and helmet covers, and the figures are in early pattern step-in smocks. 1 Company is entirely in olive green, apart from a few helmets in plain blue-grey. Having consulted a few painting guides, VJ 'Russian Uniform' is a pretty good match for the green smocks, although far too dark for 15mm so it needed some lightening. 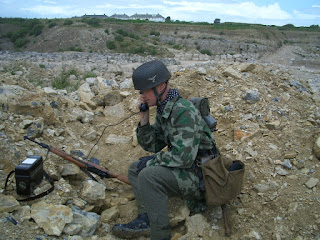 I do know something about FJ uniform colours as it is one of my dressing up interests. I can't think who this is on the Feldferrnsprecher, but you can see how the base pale grey shows up on the Splinter B smock. 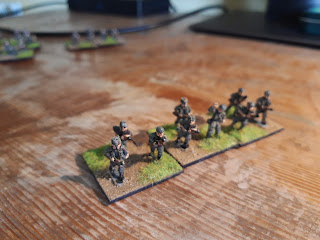 2 Company. These guys have green smocks but Splinter B helmet covers (the one with the light grey base as in the colour photo above). One thing I miss on the these newer sculpts is they no longer have the distinctive Peter Pig faces with open mouths, but they are nice little figures with good deep mouldings which take a wash and a drybrush well. They've even got the helmet straps nicely moulded on if you have the patience to pick out that sort of detail (it turns out I don't). 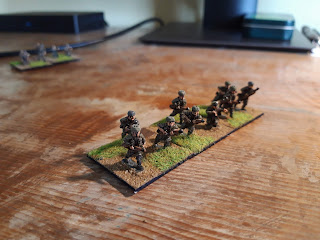 And finally 3 Company. These guys are in Splinter B smocks and helmet covers. I had exactly the same problem with these as my 20mm FJ, the ink wash stains the light grey base colour and makes them too dark do I had to touch up the camo after the wash. I used Russian camo green for the green element as it gave a nice contrast and you sometimes need to exaggerate camo colours in smaller scales.
The rifle armed figures mainly have cast on bandoleers, which come up very nicely with a wash and a drybrush, and it saved me painting fiddly ammo pouches. I didn't bother with any LMG figures as I'm unlikely to use these for tactical games where I have to worry about LMG groups. 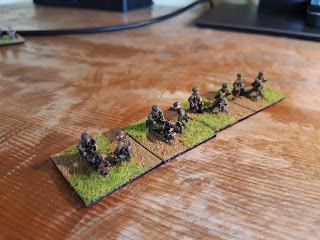 Heavy weapons, a pair of tripod MG34s and a pair of 81mm mortars. I did them in RAL 6006, again so they are good for the whole war. Field grey equipment was still common in 1945. Spare crew were appropriated for re-allocation as command staff and engineers (the mortar crew had a nice standing officer figure and the MG crews had a couple of spare figures with boxes). 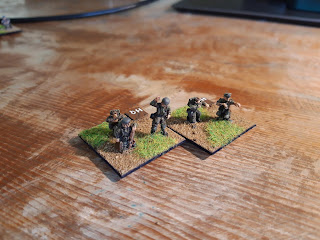 HQs, a mix of figures from one of the command packs and one of the mortar commanders. The other officers have been allocated to the command stands in the rifle companies. If I need singly based officers, I have loads of those already and I didn't want to invest heavily in all sorts of odds and ends.
I did all the leather webbing black. Yes, it was actually brown, but for much of the war it was such a dark brown that is looks black from a distance. The para figures are also festooned in cloth equipment like their bandoleers, breadbags, cloth para gas mask bags etc, which all have cloth straps too and by and large I just did in a mid green. 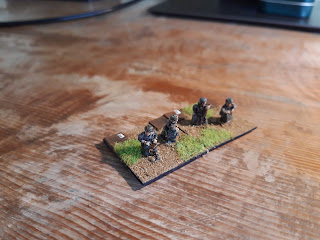 Engineers, bodged up from various kneeling figures. One of them is a radio operator with his radio converted into an engineer assault pack. It is always useful to have some engineer stands. I did these in overall Splinter B as well, because the are engineers. Ideally I'd have done three stands, but in the end I plumped for an extra HQ.
So there we go, a nice bunch of figures and highly recommended. Perhaps not the cheapest in the world compared to e.g. PSC plastic ones, but I only wanted enough figures for a battalion, not an entire regiment. I managed this lot out of just six packs of figures, which was pleasingly economical and only takes up a relatively small amount of storage space too.