Portable Wargame and Lockdown at VCOW

I was keen to get along to Bob and Garys session on the Portable Wargame, as I own several of

the books and we’ve tried a few games of this both face-face and remotely in different periods.

For whatever reason, we’ve run into various issues (generally related to geometry). I was therefore

keen to see it played how it was meant to be played. This was a popular session with several players signed up and many observers.

The actual game session was a hypothetical vaguely ACW battle between Blue and Grey sides, and although it used the standard SPs and weapon ranges, didn’t appear to use the any of the unit activation mechanisms, it was straight initiative then igougo. Both sides got stuck in fairly quickly, but there was a bit of confusion around movement in close quarters in terms of interpenetration and flank attacks. On re-reading the original rules again, I realised I’d completely misinterpreted them with regard to unit interpenetration, although I’m not convinced brigades of close order troops can simply march through each other, particularly when retreats through other units are barred. 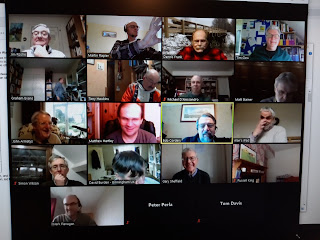 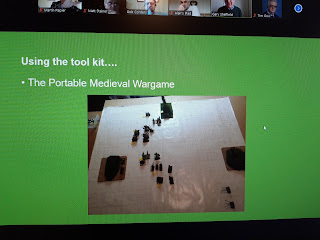 There was an interesting presentation on the history of the PW, and I hadn't released how much  it owed to ‘Grid Wargames’ (which I also own). 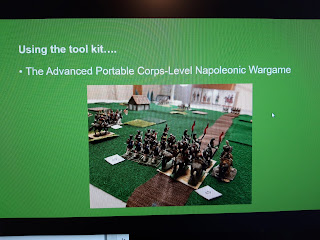 One of the later PW iterations, the Napoleonic set. 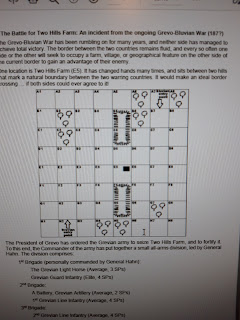 The Battle of Two Hills Farm, the scenario for this session. 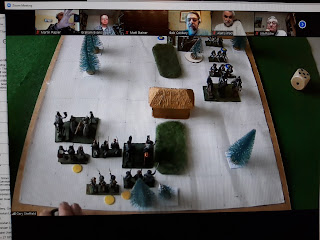 Both sides lined up on the table. This is similar to the sort of setup we use at the Sheffield club. 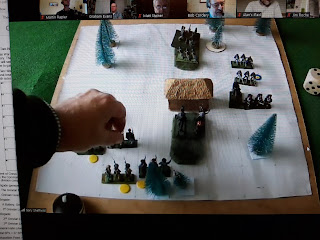 The 'hand of god' shoves the toys around under the direction of the players. 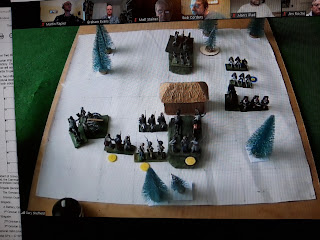 Unsurprisingly a huge melee developed around the farm. 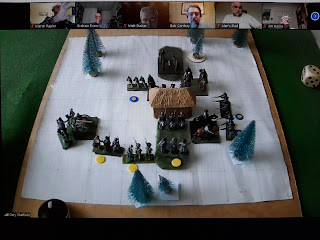 The coloured markers were indicators of troop quality. 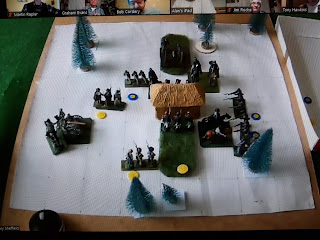 Eventually the Greys came out on top (apologies if I've got that the wrong way around!). 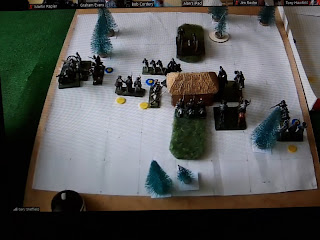 Gary was resolving close combat as per the written rules (5+ to hit, adjusted for modifiers) whereas

the rules QRS provided by Bob was using the system from the Napoleonic rules (roll 3+ to avoid being hit), which also caused a bit of confusion and led to a useful discussion on the pros and and cons of each approach.

The session was very helpful as it prompted considerable discussion on the design intention and how the rules are supposed to work, which isn’t something you can get from a book, and one of the things which COW brings to game design. I had been to some of the very early PW test sessions at COW but things have obviously moved on from there, so it was a very helpful session in understanding the intent behind some of the mechanisms. One thing which Bob underlined was the important of not changing the artillery activation sequence, as it encourages players to get their artillery set up and then blaze away, something I heartily agree with.

One of the great things about the Portable Wargame is the way it has inspired dozens of other gamers to take the basic game and develop in interesting ways for multiple periods, the only other set of rules which is comparable might be DBA. Neil Thomas’s various rules might be another contender, but there is much more variety in the basic sets of rules, whereas the Portable Wargame remains pure to its principles in every iteration.