French and Indian Wars with Fistful of Lead

We were supposed to be playing a big naval game outdoors at Tims, but sadly Storm Evert intervened, so we retired indoors with suitable precautions in place. First up, Tim put on another 54mm skirmish game using Fistful of Lead, our go-to set of rules for single figure activation skirmish games. 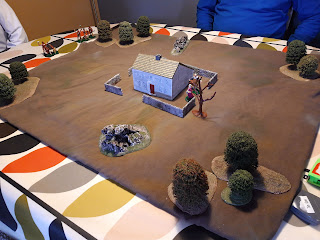 This one was set during the French and Indian Wars. Some settlers and rangers were holed up in this farmstead and an Indian raiding band was after some prisoners. 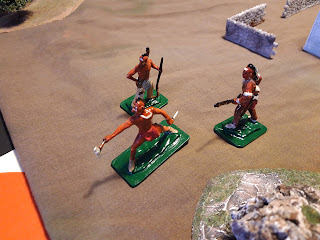 Here are my chaps. Two armed with muskets and one with a tomahawk. All beautifully painted by Lloyd. We had three similar groups, and being familiar with the terrain, the were able to move offtable from one patch of forest to another. 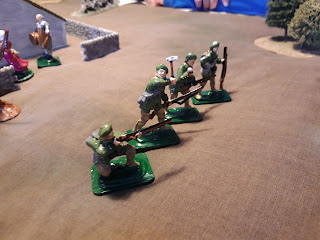 The Rangers, four of them armed with muskets. I'm not sure what they were supposed to be originally, but they have a look of WW2 Lovat Scouts! 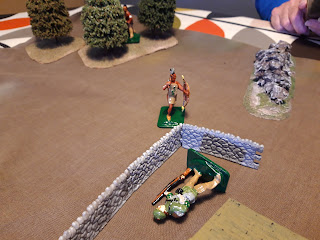 The action opened with us sniping at the defenders of the farmstead. Russell got lucky and one of the Rangers went down with a musket ball between the eyes. His chap armed with a bow took advantage of this to dash across the open ground. 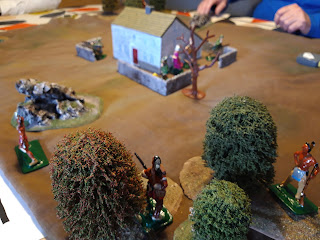 My chaps were banging away at the Ranger facing them, and mainly succeeded in putting lots of holes in the farmstead. Dimly visible are the farmer and his daughter/wife (we were never quite sure which). 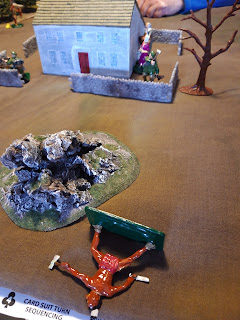 One of my chaps dashed for this clump of rocks but was gunned down on the way. Ouch!. 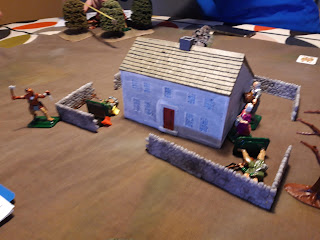 We finally got the better of the defenders on this side. Lloyd managed to wound his opponent and closed in. I got lucky and killed the Ranger behind the wall. 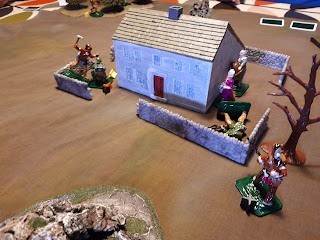 My musket armed chap cautiously approached (the black marker indicates it is currently unloaded). Lloyd meanwhile leapt the wall and found out the hard way the even wounded Rangers are pretty tough in hand-hand combat! 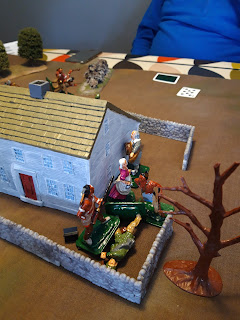 Meanwhile I approached the back of the farmstead and tried to capture the daughter/wife (this required a 'kill' result in hand-hand combat). I managed to grab her, but was then beaten back by the farmer who belted me with his barrel! 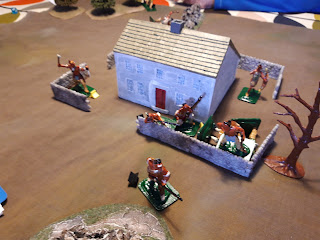 Russell had meanwhile managed to capture one of the Rangers, and the remaining Indians moved in and the farmer went down. In the confusion the daughter/wife got away and my guys contented themselves with running off with a captured musket and the farmers barrel of beer. Result!
That was loads of fun and very cinematic. Although the scenario was very simple, the card play activation mechanism requires a good degree of engagement and thought by the players and it resulted in people having meaningful decisions to make and having plenty to do.