Playing around the the Portable SCW Wargame

After Simons recent Portable SCW session, I had a bit a play around with the rules try out some of the modifications we'd discussed. I also wanted to try out some different activation sequences to see how they planned out, and also to make the game units and ranges fit a bit better with what I felt was the level of action being represented.

The main activation method I wanted to try out was the Belle Epoque one, drawing dice for each unit so the turn was interleaved, and then using the those dice for the activation rolls. I realised in the basic game there are no modifiers for command quality, so I added in an activation roll for all units, regardless of affiliation. Poor commanders would fail on a natural roll of two or less, and Average ones on a one. 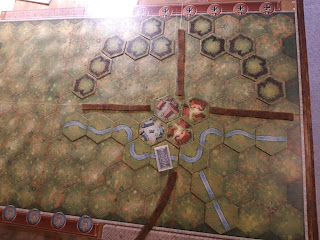 I used the 'Turning Point' scenarios from the rules for playtesting and setup the terrain on my old Memoir 44 boards rather than dragging out the Hexon. A single one of my 15mm troop bases fits neatly in these hexes.
The opening scenario is very small and ideal for playtesting. I rapidly realised that with a Communist leader and Popular Army troops, there weren't going to be any faction activation rolls though! Oh, well, that made things simpler. I pre-rolled all the air strike, commander and unit quality ratings and kept those between games. 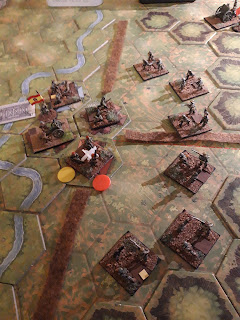 The Republicans close in on the city (again). The main change I'd made to the units was to settle on them representing battalions, which in turn meant the MG units didn't make any sense. Instead I just designated some unit types as 'well armed' and gave them an extra dice of fire combat. In effect this just distributed the MG dice between the infantry battalions. I also went with a notional 1km hex size, and reduced the direct and artillery fire ranges accordingly. I could imagine having three sets like the Napoleonic Rules, with elements as companies, battalions or brigades respectively. 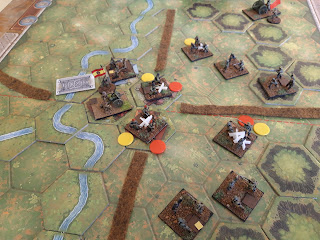 This then equated to a weak Republican division attacking a ployglot Nationalist Regiment. I also introduced a rally option for pinned units adjacent to the enemy, simplified the treatment of transport for a brigade/divisional level game and used the commander rules from the Napoleonic set.
The first run through was OK, having integral unit transport (limbers in this case) was easier to manage than seperate transport units and the revised leader and unpinned approach worked very well. The thing which didn't was the revised activation sequence which just generated far too much dice rolling and didn't really add anything to the game.
The red counters show where artillery fire is landing, the yellow counters are pinned units and the white tile spacers are hits. 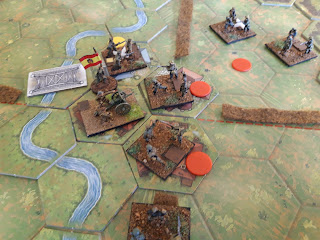 The Republicans enter the outskirts of the city. The 'well armed' units seemed to work OK without unbalancing things, and seemed a better representation than seperate MG units. I was still trying to work out how to account for commander quality in the standard turn sequence. I tried the limited activations from the nineteenth century set, but coupled with the individual activation scores, it just slowed everything down too much.
Finally I hit on the obvious solution, simply modify the initiative roll in the standard sequence by commander quality (+1, +2 etc) and let the winner choose the sequence.  This is the same method was we use in some other homegrown rules, and suddenly commander quality became vital. 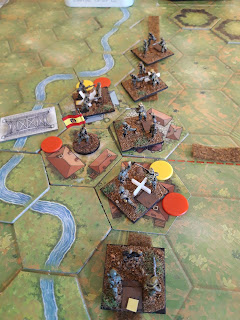 I ran it again and new initiative system meant the players had to be quite canny about the side activation sequence as they could dictate the range and pace of combat (as well as unpinning). That seemed to work well and felt right. 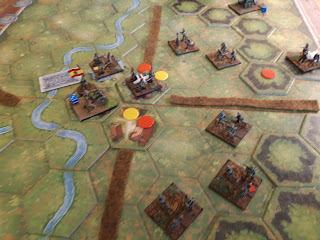 On the last run through the other thing I re-introduced was artillery ammo limits. It was just far too easy for the side with artillery superiority to pound the other into dust, starting with CB fire on their guns and then plastering all the units in turn. Six shots per artillery gruppo seemed plenty. I also brought in observation limits for artillery spotting, using the same method as I do in Memoir 44: three hex spotting or five off a hill. (There is a reason hills were fought over irl).  That stopped the guns ranging over the whole table without a ground presence. 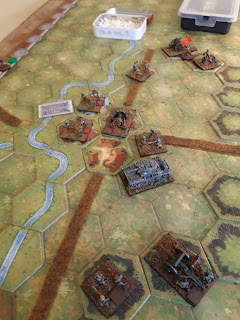 I'd done the first scenario enough by now and set up the second scenario of the campaign, the Republican defence of the city. In this situation the Republicans have a couple of International Brigades supported by a company of tanks and AT guns and two gruppos of field guns. The Nationalist counterattack has two demi-brigades from the Army of Africa, a regiment of Requetes and no less than four artillery gruppos. They also had a company of tanks and of AT guns.
The Nationalist commander was 'good' while the Republican one was just average, and the overall Nationalist troop quality was better.
The Republican defence is shown above. A couple of IB battalions in the town, a couple more as OPs on the flanks with the field guns and everything else in close reserve behind the city. The Republican CO is with one of the guns to improve its firepower. 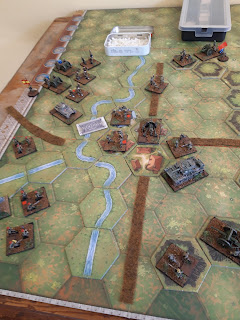 The Nationalist attack was weighted to the north. It was almost impossible for them to set their guns up out of observation from the hills behind the city, so they just piled on and unlimbered. At least they were out of direct fire range. 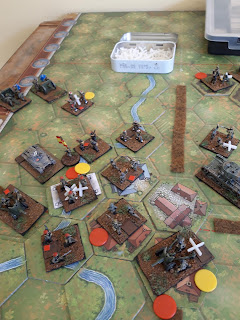 The Nationalists close in on the city. The Republican guns spent almost the whole game firing CB missions against the Nationalist guns. They destroyed one gruppo and forced another to retire (which was a complete pain as it had to limber up, move back on, unlimber etc). The Nationalists didn't have the height advantage for observation so had to mainly shell the Republican front line. This spread a certain amount of death and destruction around, but the Republicans were careful to minimise their losses by retreating where possible.
This was the Nationalist high point and they drove back the front line defenders. 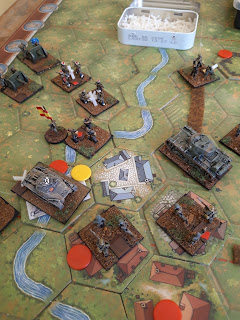 The Nationalists only had their panzers available to exploit, but they found out the hard way that light tanks vs infantry in cities is a bad idea and the losses they suffered as the IB counterattacked was enough to push the Nationalists over their exhaustion level.
That all went pretty well and I will try these out with some human players in the near future.