Tim took us on another Medieval jaunt with Fistful of Lead. Regular readers may recall from the last game that Sir Martin of Nether Edge (hurrah!) had won the key to Lady Ermintrudes chastity belt, only to find that the Fair Lady had been kidnapped by the wicked outlaw, Robin Banks.

In the latest saga we set off with Lord John to recover his daughter. 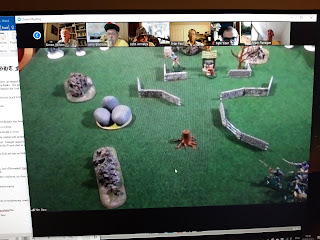 The scene of strife. The Kickyerhead Inn is visible in the distance, a welcome refuge for the weary party of adventurers just visible in the bottom right. 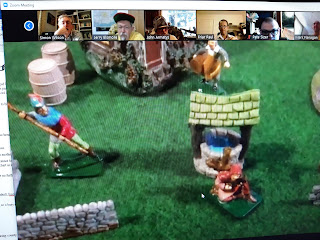 Outside the inn is a large bouncer, the inn keep with a big barrel of beer and a lute player tuning up. 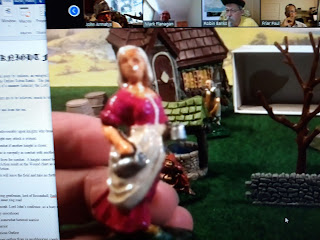 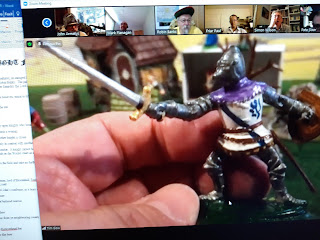 Sir Martin of Nether Edge. Hurrah! This time we didn't have any retainers with us. 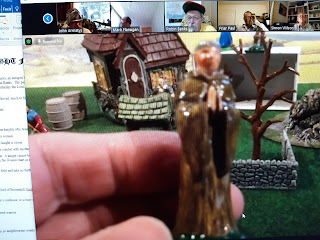 Friar Paul to keep us on the straight and narrow. 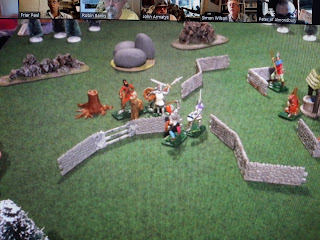 The party shuffled along in a somewhat disorderly manner (we were activating in card sequence). Lurking in the woods to the north was Russell of Hebden Bridge, a notorious outlaw. 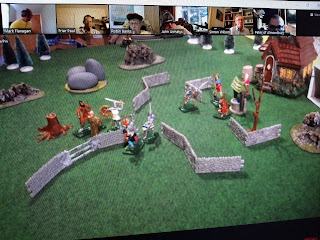 Lord John sent his bodyguard to talk to the bouncer, who greeted him cheerfully. 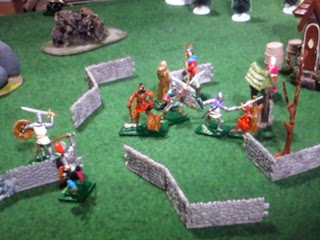 The rest of party gratefully headed for the pub. Sir Mark of Great Ayton downed his pint in one gulp, clearly a thirsty sort of cove. Meanwhile I made a beeline for the lute player and tried to lop his head off. My personal objectives included 'kill someone', and an annoying lute players was a much safer target than a heavily armed outlaw. He fended me off with his lute. 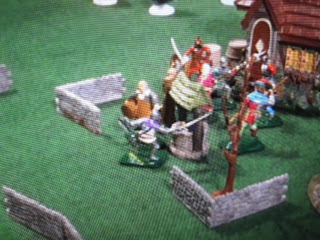 The rest of the party clustered around Doris and the inn keep, downing pints. Lord John however kept his eye on the prize and burst into the ground floor of the inn. I had meanwhile managed to finish off the lute player. The inn keep offered me a pint, clearly a bit nervous of an apparently homicidal knight, but I handed it to Lord John who also quaffed it in one gulp. I had another objective..... 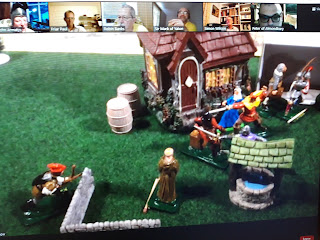 After much drinking, most of the party followed Lord John inside. I however bought another two pints from the inn keep. Just as I was eyeing up the foaming ale, Robin Banks and Lady Ermintrude emerged from an upstairs window, and jumped down right beside me. Blimey! We broke for the night at that point, so we will have to wait for tomorrows thrilling instalment. 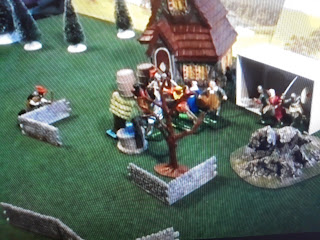 Well, this had the makings of an unseemly brawl. The first thing Robin Banks did was get on one knee and ask Lady Ermintrude to marry her! Being an honorable knight, I naturally enquired what was going on. At this point, Russell of Hebden Bridge decided it would be a good idea to start shooting arrows into the crowd. One stuck in Peter of Almondbury's leather armour and the other bounced off my helmet. 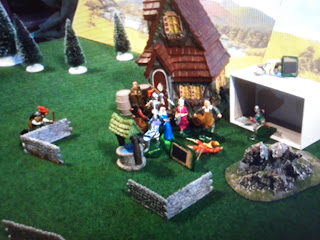 While all this was going on, Lord John burst out of the inn and laid into Robin Banks, who fell wounded. Oh well, that made things nice and easy, so the rest of us got stuck in too. The wily outlaw rolled from side-side avoiding our blows while Russell continued to shoot into the crowd. 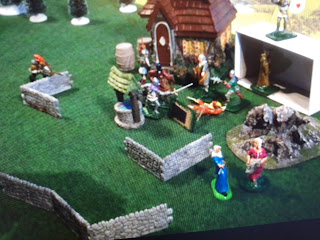 In all the commotion, Lady Erimtrude shouted 'I've had enough of all you lot' and ran off hand in hand with Doris the barmaid, which was a bit of a surprise. 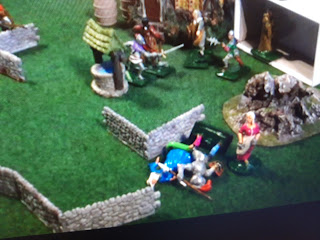 The rest of us finally finished off Robin Banks, but Lord John set off after Lady Erimtrude and a very unseemly struggle ensued as he wrestled her to the ground. Doris didn't like this one bit, and whacked him on the head with a beer mug then poured two pints of beer into his helmet. 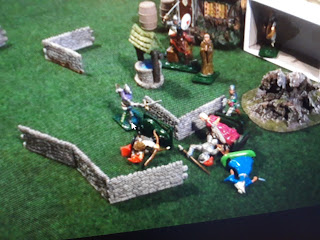 The rest of the party ran to intervene, but before we could get there, Ermintrude stuck a knife in Lord Johns eye and 'Thelma and Louise' made their escape. Sadly Lord Johns wound proved to be fatal, as it looks like Lady Erimtrude is the outlaw now. Watch out for the next instalment...
I'd had three objectives, and had managed two of them - kill someone and get Lord John drunk. It was decreed that given the amount of beer Doris poured into his helmet, it was decreed that this objective was met. The third was to recover Lady Ermintrude, which I suppose we did briefly, but then she ran off again.
So once again, another entertaining outing for Fistful of Lead, and watch this space for the next exciting instalment!