The other game we managed to get through on our 'rainy day at Tims' was Quartermaster General 1914. This one is rather more involved than QMG WW2, and requires a degree of preparation and planning by the players. I really like the points scoring only happening every few turns as it encourages  players to plan their objectives for the year, unlike the WW2 one where it is every turn. It better reflects the more deliberate nature of WW1.

The Central Powers were Russell (Germany) and Tim (Austria-Hungary and Turkey), while the Entente was Pete (Russia), Lloyd (US/UK) and myself (France/Italy). 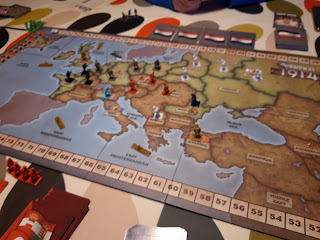 1914/15 saw heavy fighting in the west and a major Entente presence in the east. Serbia held out, Rumania joined the allies and the British managed to take Istanbul! The Russians expanded West but failed to take Prussia, and heavy fighting broke out in Northern Italy between Austria and Italy. The Allies established an early points lead due to seizing so many production centres. I also had a hilarious status card where I got +1 VP for every attack I made with France in the west, which encouraged a rather aggressive French approach... 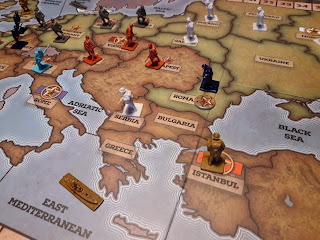 The Allies hold the Balkans. 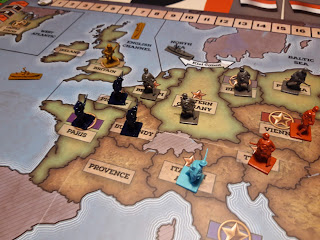 The Germans were being pretty aggressive in the west, and a number of naval actions were fought in the North Sea. This position was a springboard for an early 'Kaiserschlacht' and 'Caporetto' which completely destroyed the French and Italian armies along the entire front. This was so monumentally frustrating as I'd just been about to play the 'Verdun' card and a number of other defensive cards. Oh well. Things started going better for the Central Powers. 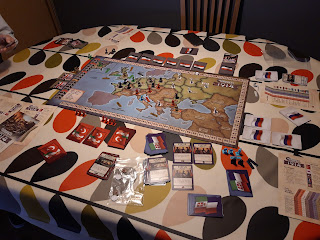 The end of 1917. The Germans were now pushing the Russians back, and the Western Front was held mainly by the US and British. France and Austria were almost out of cards, oops. This rather restricted their options! In the east there was heavy fighting in and around the Caucasus and Persia as Russia and Turkey vied for dominance. 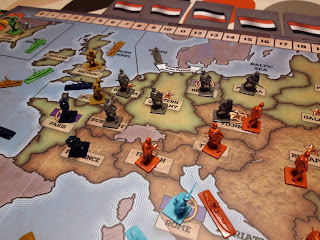 The Western Front in 1918. The Austrians have taken Northern Italy and control the Adriatic, while the Germans are in Burgundy. Fortunately Rome and Paris are heavily fortified. The British have managed to retake Picardy, but the German High Seas Fleet is still at large. 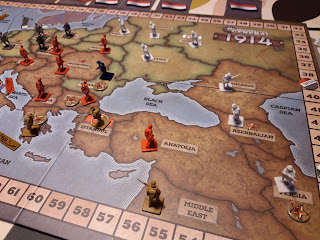 In the East, Russia has lost Poland and Galicia but now controls both the Caucasus and Persia. Although Serbia has fallen, The British hold Greece, Istanbul and the Middle East, while amazingly, Rumania is still holding out.
Although the Central Powers closed the gap in the last two years of the war, it isn't quite enough to overtake the Entente, and we win by 6 points (59 vs 53 iirc). Those extra points for Rumania and Istanbul clinched it for us, despite the reverses in the West.
What a great game, a very clever design and a bit less random than the WW2 one. Nice to be able to play it to a conclusion in a single session.