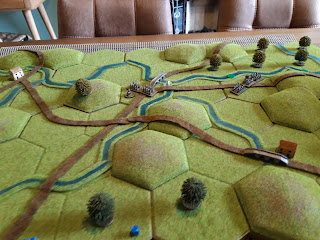 Evans and Cocke hold Stone Bridge and Balls Ford. All units were rated as poor (as they are all raw recruits), but based on the Volley & Bayonet OBs. I bumped up the handful of higher morale units to average, indicated by a leader figure. Evans was one of these lucky units (others being Sherman, Jackson, Stuart etc). 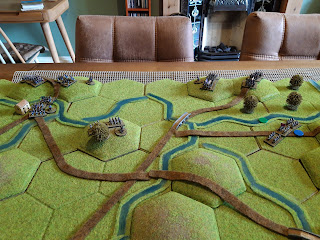 The Union troops came lurching on. Johnstone and McDowell were both reasonable commanders but found their command points spread very thin across the inefficient units under their command. Evans moved over to Matthews Hill, while Cocke dug in at the ford.
Sherman and Schenk are on the hill to the top right, while Porter, Burnside and the Corps artillery are over on the top left. Almost all the guns are integral to the various infantry brigades as attached batteries. 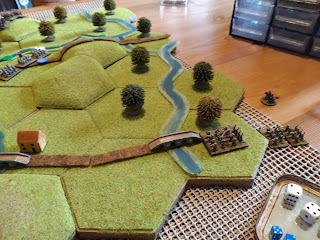 Bartow and Bee come marching slowly on. Johnstone didn't have many CPs and both these units failed their actviation rolls. 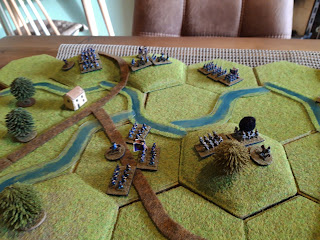 Evans takes an unlucky artillery hit and Porter deploys to assault the hill while Burnsides moves around the north. This opens up enough space for 3rd Div to start entering. 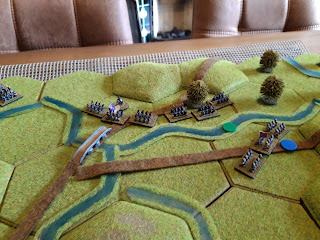 Sherman and Schenk move up to the Bull Run. 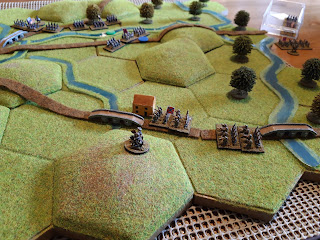 While Bartow and Bee reach Newmarket. Johnstone used most of his CPs to get these reinforcements forward. 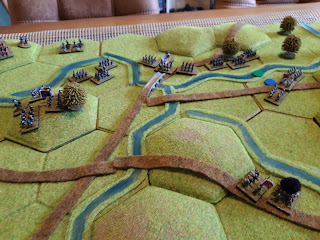 Sadly, Evans doesn't hold out for long (unlike real life) as Porter rolls over his disorganised brigade. Burnside fords the Bull Run, while Sherman is a bit stuck. The Bull Run is much deeper south of Stone Bridge, but he doens't want to get in Burnsides way. Bartow is forced to retire from Henry Hill by long range artillery fire. 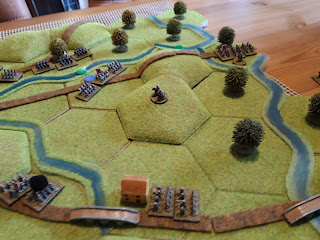 Cocke is still holding on fine at the ford as both sides exchange ineffective musketry across the river. Jacksons brigade arrives to save the day (top right). 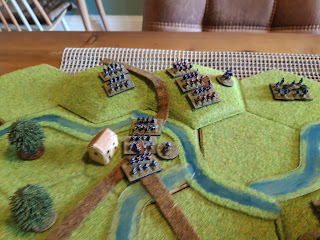 3rd Div is still stuck in a horrible traffic jam north of Sudley Springs. McDowell prioritised Porters assault for his CPs, leaving this lot to sort themselves out. 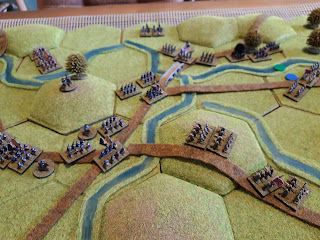 Bartow and Bee sort themselves out and forestall Porter and Burnside by getting to Henry Hill first. Schenk is busy losing the firefight with Cocke. The massive Union numerical superiority is starting to finally deploy 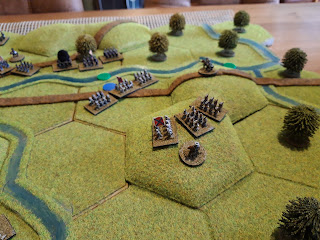 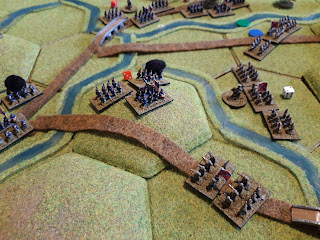 Meanwhile 'Storming' Porter takes Henry Hill, overunning Bartow in the process. Jacksons brigade is is now deployed at the bottom of the hill however. 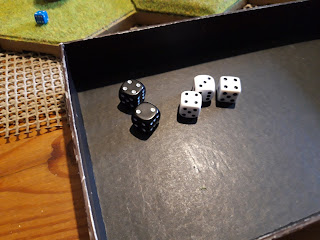 Jacksons counterattack, low is good. Jackson gets three hits to Porters two and storms the hill. 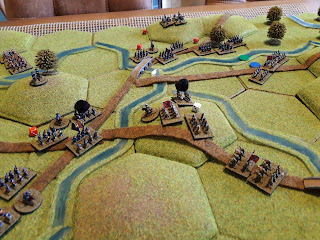 Suddenly the Confederate position is looking a bit better. 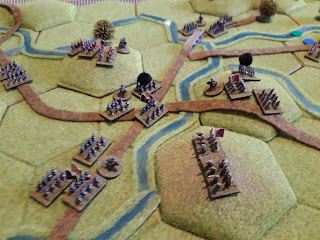 2nd and 3rd Union Divs line up at the bottom of Henry Hill and Bald Hill for another go. 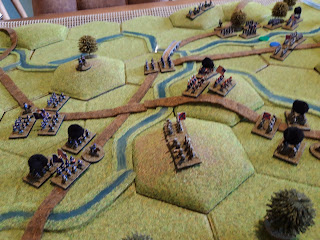 Jackson is forced off again. 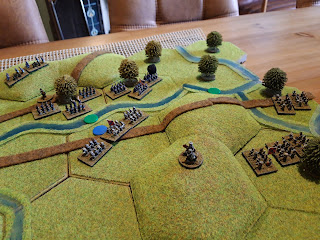 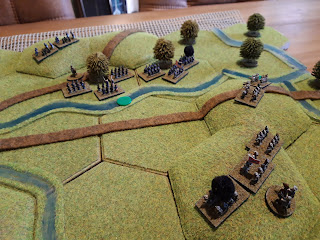 Just in time as Cocke is finally overwhelmed by Sherman and Schenk. 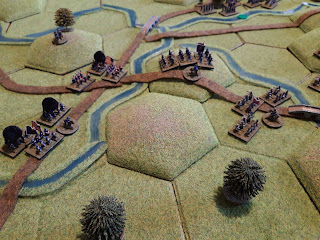 Although many of the Union units are pretty shot up, there aren't enough Rebel units to contest Henry Hill now. 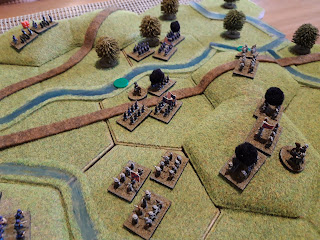 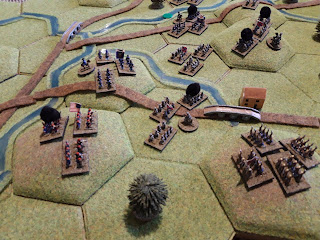 Ewell and Kirby Smith form up to try and retake Henry and Bald Hills. 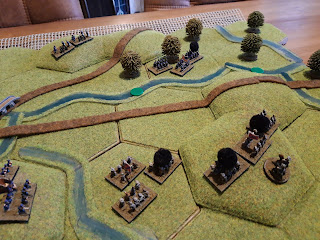 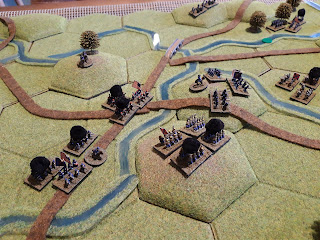 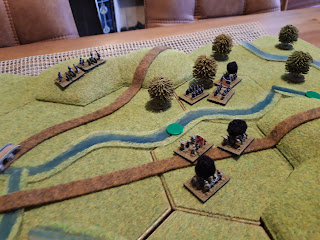 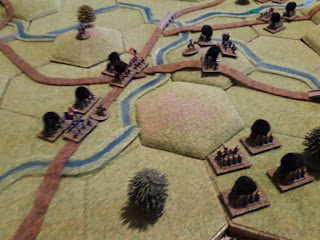 Ewell is driven off Bald Hill but the Union forces are unable to reoccupy it. At the end of the game that means the Union only hold two objectives, so the Rebels have won the battle of Manassas!
That went pretty well and I think, although the combat is considerably more random than Rifle and Kepi and poor old Johnstone rolled appallingly for his command points throughout although on one critical turn (when Porter took Henry Hill) he rolled very well. We've played a few games of Belle Epoque online and I think this one will be manageable as well. The last thing I need to try is a version of the Portable Wargame that I'm happy with. I've been rather inspired by Alan Saunders ECW PW rules, so minded to try something along those lines. There is something very ACW about the attritional nature of SPs as well as the limited activations for each side (Antietam immediately springs to mind). I just need to make the movement and combat system fit my own prejudices about the period.