Battle of the Dunes

Tim put on a Table Battles game at short notice covering the Battle of the Dunes. An engagement I'd heard of but knew very little about. The Spanish and French having a dust up in northern Europe with British forces apparently on both sides! Well I never. 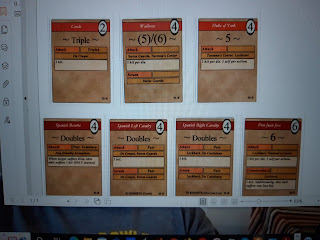 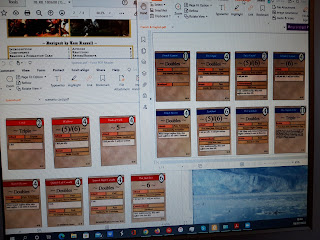 My, what a complicated battle. The French have the support of the English Fleet for this one, as well as artillery superiority.
The Spanish are fairly decent troops (bizarrely including the Duke of York) and are deployed in depth. 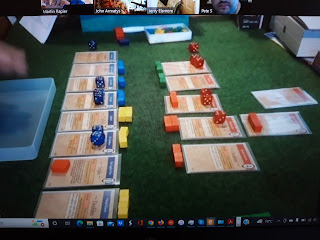 Here is how it looks on the table. French on the left, Spanish on the right. Each Army has two wings, denoted by the different coloured strength point blocks. 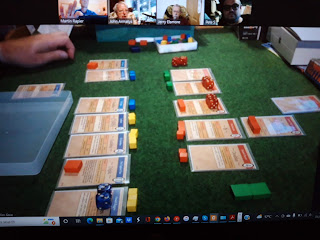 I didn't take huge numbers of photos as not a lot of stuff moves around in these games. The Spanish left was fairly static, we put some command dice on Don Juan (yes, that one) which let him fend of the French attacks. Most of the action was one the right and our forward took Tercios took heavy losses from the Swiss Guard with artillery support and had to withdraw.
We committed our cavalry who were very successful in blunting the French attacks, but our own attacks were hampered by the enemy guns which kept suppressing our attacks. 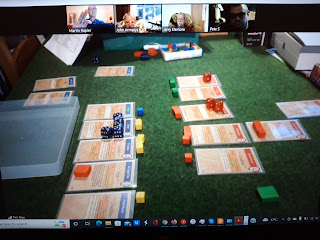 Things started to get a bit sticky when the French realised they could bombard us and reduce our morale! Despite us having an early advantage of 3 morale  points to 2 and destroying a French unit early, they rapidly blasted our morale down to one point.
We were left in a position where we had to attack and destroy a French unit to win, while avoiding any further losses of our own, and operating with combined arms to mask the French guns and mount our own assaults. Meanwhile the French were trying to do the same us. All rather challenging!
Both sides hammered away at each other, we both had reserve units which were rapidly depleted, and then it was a matter of managing the command dice and attack sequencing to force enemy reactions and a follow up attack.
We just pulled it off as the exhausted Spanish cavalry were a whiff away from routing. Phew, that was very hard fought and I remain incredibly impressed by this game system. In real life Turenne beat the Spanish by waiting for the tide to go out and enveloping their left, supported by the guns of the fleet. At least we managed to avoid that this time around.