Many years ago I switched from 20mm to 6mm for WW2 wargaming, and I busily set about converting my collection of Airfix Pz IVs into other things as modelling projects. One of those was a Nashorn. 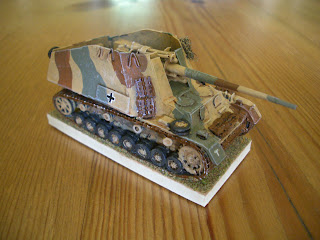 Here is the finished thing, I think it came out rather well. I can't for the life of me remember where I got the plans, maybe from Airfix Magazine, or possibly one of the 'How to go Plastic Modelling' series. I'm pretty sure it is one of Gerald Scarboroughs anyway.
There is quite a lot of conversion work to do as it needs an entirely new superstructure, including the drivers compartment, building. Naturally, the superstructure is made up of angled plates of various dimensions, nice and simple then. 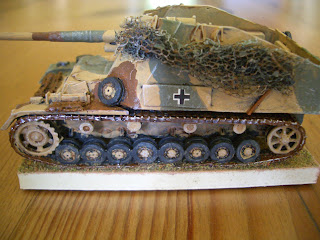 An additional expense is that for some bizzare reason the Germans used a different drive train which included Pz III front wheels. So I had to chop up an Airfix Stug III just for the wheels. I rather like the camo net, iirc it was made out of gauze bandage stained appropriate shades. 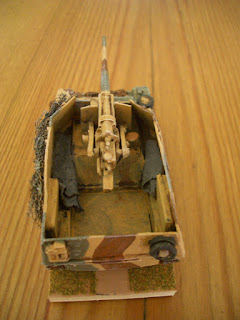 Fortununately the interior is fairly empty. The tarpaulins are rolled up tissue paper. Expense number two is that this needs an 88mm gun, so I had to chop up an Airfix 88 and extend the barrel as well as building the gun mount. Easier than scratch building the whole thing though. 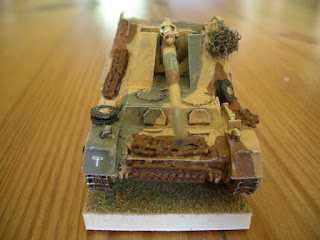 You can see the drivers compartment here, I guess I made those hatches and visor covers. Track links cannibalised from various models, including offcuts of the over-long Airfix tracks. I obviously used to have a steady hand as I've apparently painted that tactical symbol on. 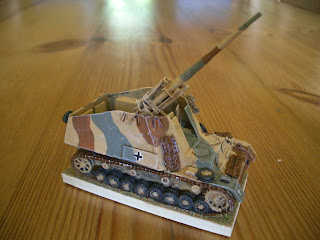 Yay, the guns still elevates. That makes it all worthwhile.

Although it is well over 40 years old, this particular model has only ever fought in one battle as far as I can recall, when I ran The Battle of the Hochwald about ten years ago (it is lurking about in the last photo having been temporarily assigned to 116th Panzer Div). Anyway, I enjoyed making it and it is an unusual beast.