While playing around with my Baccus ACW armies and various scenarios I realised that some tents would be useful as both scenery and status markers. My 6mm Napoleonics have a few tents which I made out of paper, but I wanted something more substantial and which I could use for a range of periods and scales. 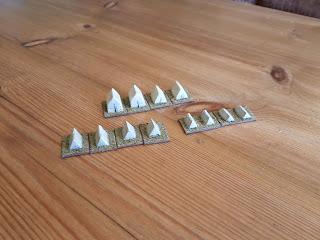 I did a bit of research and Irregular Miniatures seemed to be the best bet, doing a range of tents in different sizes in a mixed pack in their 6mm accessories range. I got two packs which yielded a dozen  tents, which I'm sure will be plenty. 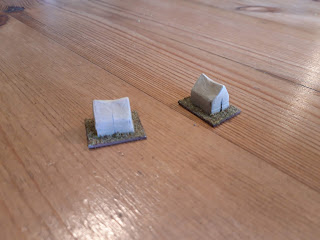 First up are these two big tents, which will be useful for Army HQs and suchlike. I undercoated them all in mid grey then did these in VJ Iraqi Sand with a light drybrush of pure white. I think offwhite looks more like weathered canvas. 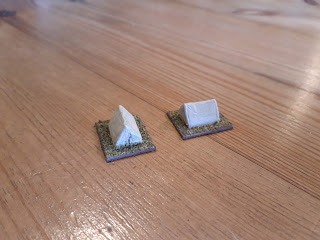 Then there are are half a dozen mid sized tents. These are a pair of ridge pole tents, also done in cream. 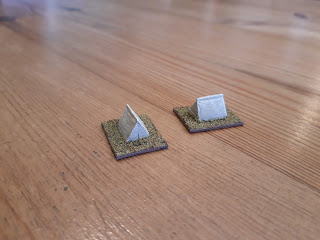 And a couple with what look like external ridge poles.
I decided to base them as the tents are all slightly different sizes, but putting them on the same size bases equalised them to a certain extent. In retrospect, I should have probably done the bases in earth brown flock to make them more generic, but the blended turf is OK. I edged them in brown which breaks it up a bit. These two sag in the middle so obviously don't have ridge poles. I did these in Dried Earth with a white drybrush, but they ended up looking much like the Sand ones. 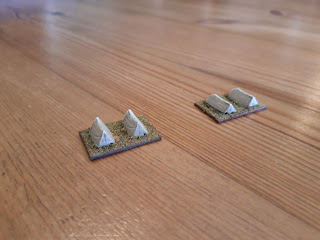 There were also some much smaller pup type tents which I based in pairs on the same size bases as the larger tents. I did these in Dried Earth too. Being smaller, they will do for my 2mm stuff as well. 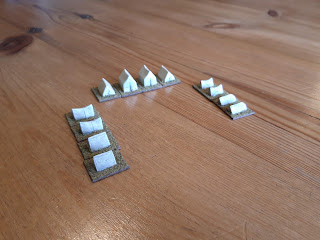 The bases mean they all line up quite nicely into tent lines, should I wish to do such a thing. Ideal for parades! 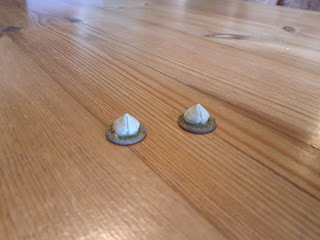 The only outliers are a pair of what I think are supposed to be Bell Tents, but tbh they look more like yurts to me. I painted them up anyway and based them on pennies, I'm sure they will be useful for something.
I'm pretty pleased with those. They were inexpensive and painted up well, and are a useful addition to my ever growing selection of 6mm terrain bits. I've got a couple of scenarios in mind already which will make use of them.