Another Table Battles session, this time from the the American War of Independance and the Battle of Brooklyn Heights in August 1776 (or Long Island as it was known at the time, Brooklyn not having being built).

Grant and Clinton try to storm the heights held by Stirling, Sullivan and Knox. Another Table Battles offering from Tim. John and I took the heroic Brits, while Russell was the treacherous Rebels. 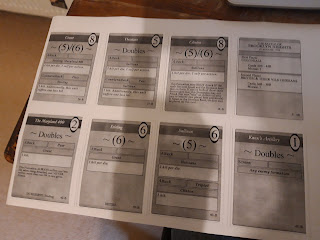 The unit cards are here, but that is a bit dull so... 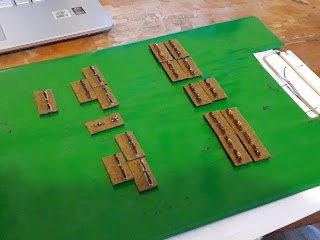 I set the units up to get a better impression. These are my 2mm eighteenth century figures. British on the right, Hessians flanked by Grants Guards and Clinton. Americans on the left, Stirling and Sullivan with Knox's battery in the centre and the Maryland 400 in reserve. 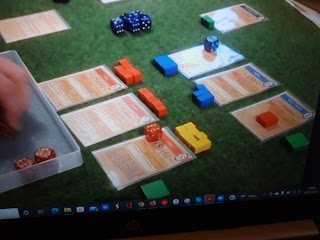 The card setup is quite interesting for this one. The Americans can basically snipe at the British from their hill, but very slowly as they can only put out one dice per turn. Knoxs guns fire on doubles and have the hugely irritating effect of cancelling a British attack.
The Brits can put out 5 and 6 on Grant and Clinton, plus any doubles on the Hessians with no limit on dice allocation numbers, so they can put some big attacks in. The only problem is that Clinton can only attack if the other two brigades have dice allocated to them already, which is hard to ensure in the face of American attacks which tend to strip the dice off the other two units. 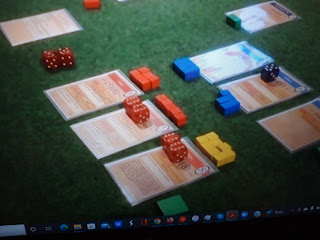 That really set the pattern of the game. The Brits would pile on a load of dice for a big attack, the Americans would snipe away, and try to keep their guns loaded as much as possible. Above Clinton and the Hessians are nicely built up, but Grant has just had his attack blunted by Knox. 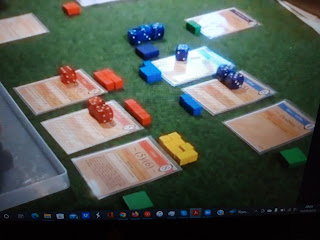 Chipping away nicely at the Americans now. Quite a few blue blocks removed, and look, Knox's battery is unloaded thanks to Clintons heroic sacrifice. The Americans have three dice in play and only three to roll. 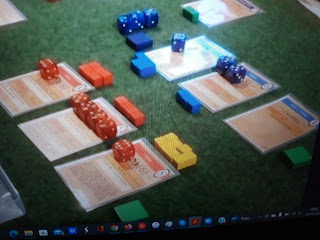 We manage to pile two more dice onto the Hessians, and poor old Washington fails to roll any doubles, so Knox's guns remain silent. 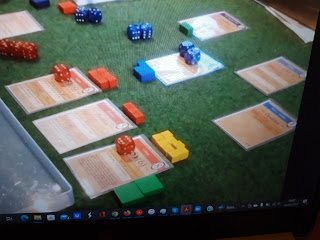 The massive Hessian attack routs Sullivan, and as we haven't lost any of our units, that is a British win. 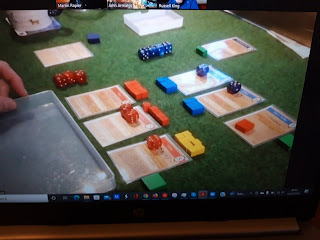 We swapped sides and tried it again. The British built up in the same old way.... 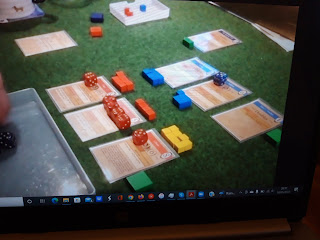 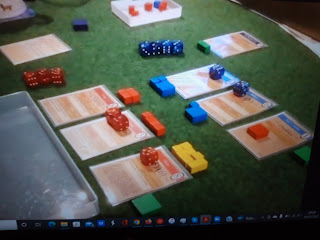 But it was not to be. The Americans managed their command dice better, keeping a couple out for small attacks, but keeping a big handful in reserve to keep the guns firing. 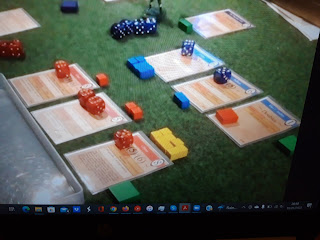 This worked rather well and soon it was Grant and the Hessians who were melting away. Grant is down to one point and the Hessians two! Sullivan is also looking a bit battered. If Stirling can get in another attack on Grant, the Americans win. 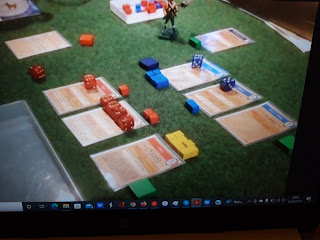 Once more Clinton rides to the rescue and he attacks, absorbing the full force of Knox's artillery. The Americans have reacted so they can't initiate their own attack. 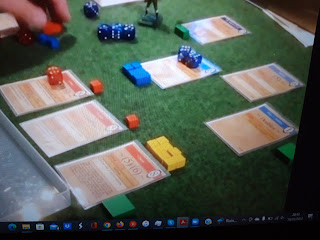 So once again the Hessians roll forwards unimpeded and rout Sullivan, but only just. The British losses were far heavier in this one.
In the real battle the Maryland 400 was committed and held the British up for a time, but Washington was defeated and had to withdraw. In both games the Americans were on the  back foot and didn't have the requisite dice in place to pull Sullivan back and replace him with the Maryland troops.
I've still very impressed with this game system, and I still can't begin to work out how to design scenarios for it. I'm glad the designer has provided plenty for us to play.