A chill dark night with the droogs

Sheffield hosted the the annual Horrorcon recently https://www.horrorconuk.com/ and the opening event was a special screening of A Clockwork Orange, preceded by an interview with Malcolm McDowell. 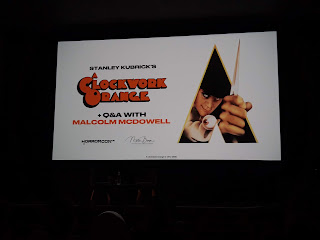 Back in the 1970s, Anthony Burgess' book made a big impression on me, and as the film had already been withdrawn by 1973 it had a certain mystique about it. In the good old days of punk rock, Alex and his pals even inspired the Adicts to adopt their white clothes and bowler hats.
The show was sold out and completely rammed, I've not been in a cinema that full for years, and certainly not since lockdown started. 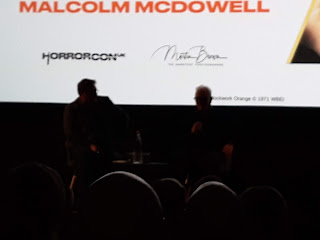 Malcolm McDowell has always been one of my cinematic heroes, I loved 'If' and of course he also killed Captain Kirk. The rather backlit head on the right is the man himself, very well preserved considering his age.
He spent an hour of entertaining anecdotes and recollections, and it was well worth the money just for that. I hadn't realised his dad was an RAF navigator in Bomber Command, and was stationed at Driffield near Bridlington.
The movie was fine, I've seen it a couple of time already and it is pretty tame by modern standards, but it was good to see it on the big screen. The music score was outstanding, as was the photography and staging, and there were echoes of Barry Lyndon in some of the scenes (particularly the prison induction sequence). I still can't watch the  bits where Alex has his aversion therapy. Urgh.
Lots of the themes are still overwhelmingly relevant today and the film has aged pretty well, and I love the Yorkshire accents. 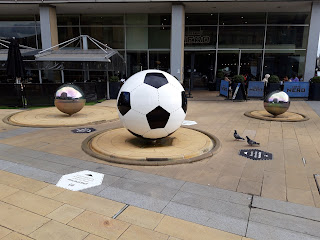 I went to Sheffields own version of the Korova Milk Bar beforehand and was amused to find one of the globes in the Peace Gardens transformed into a big football. We are hosting the Womens Euros 2022 with four matches just down the road at Bramall Lane and this was part of the supporting public engagement activities, along with a big roadshow with Alex Scott and Gareth Southgate in attendance.
So all in all, a pretty good night out.