Well, if you are going to a Napoleonic naval battle, you may as well do a big one. After the success of Actium, John produced a Napoleonic naval version of his one hour naval rules and put on the Battle of Trafalger at 1:3. We did this a few weeks ago, pre lock down. 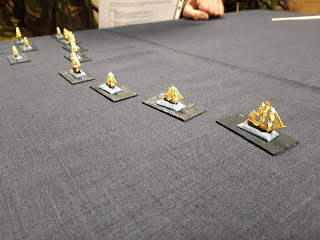 The Franco-Spanish fleet in a ragged crescent. I took the French and Diego the Spanish. We were heading for Cadiz, somewhat handicapped by sailing close hauled into the wind with a lee shore to starboard. Ideal conditions for a fleet action! 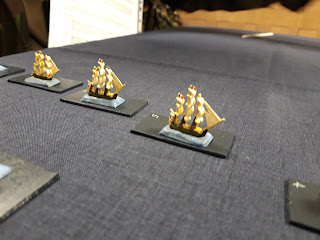 My flagship, the Beaucantare. Vive la France. The ships are all 1/3000th Lammng from Johns collection and dating from the early 1980s. 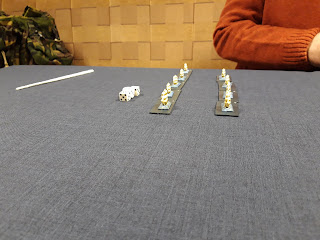 Perfidious Albion. Collingwoods column is on the left (commanded by Tim), and Nelsons column on the right, commanded by Simon. I'm sure his RN experience will come in handy. This lot had the weather gauge, with the wind over their port quarter. Oh dear. 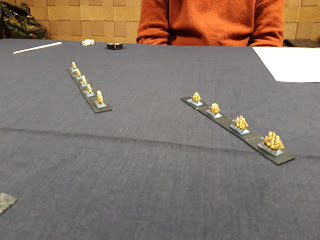 Rather strangely, the English fleet veered off to port. Perhaps they are heading for Cadiz too? 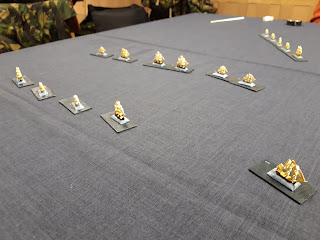 Well that's OK. It gave a chance for the Allies to sort themselves into separate French and Spanish squadrons. Much more tidy. 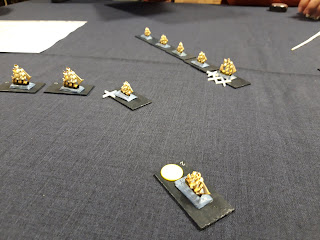 Collingwoods squadron enagages. The Royal Sovereign takes a pasting, but RN gunnery is devastating, boosted by the superior speed of the upwind ships which lets them loose off rolling broadsides as they sail past. One of the French ships has already struck her colours. 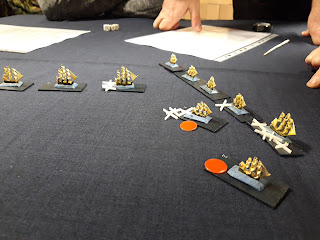 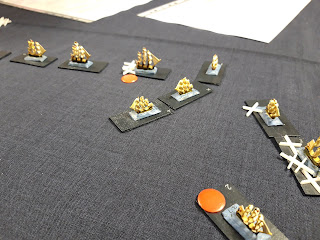 Oooer, half of Collingwods squadron breaks the French line. Poor old Beaucantare gets shot to bits after being raked from the bow. 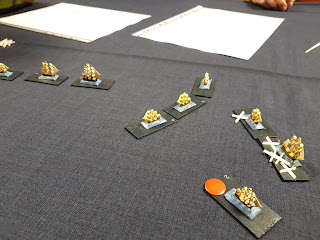 And promptly vanishes from the tabletop, having been reduced to matchwood. 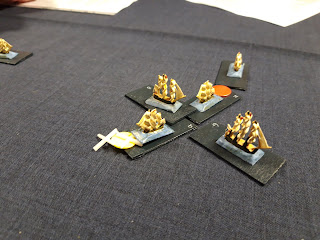 However.... the English have now moved downwind of the rest of the French fleet, so my tail end charlies put on sail and break the British line as well, scattering raking fire in all directions. At this point, I should have boarded the crippled RN ships with my fresh French ones, but I completely forgot in all the excitement. Sacre bleu! 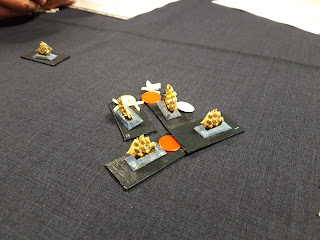 The RN don't seem too phased by being crippled and promptly proceeded to blast my ships to pieces at point blank range. The lone survivor is Achille in the top left. 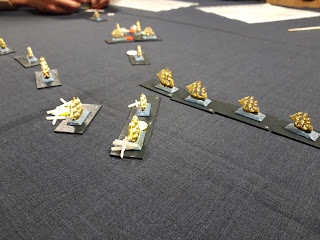 Nelson finally turns back south and engages the Spanish vanguard. The Spanish are duly shot to pieces too while Nelson sails on unharmed. The Spanish did eventually land some hits on Victory, but to little avail as superior RN gunnery and the wind gauge made short work of them. 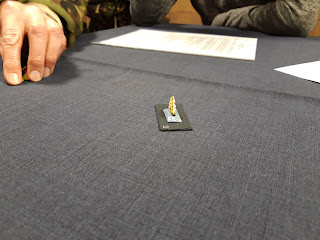 I have a cunning plan! Achille tacks and sails off close hauled to the southwest. If I can make the far corner, I can then tear into Cadiz with the wind behind me. The RN can only follow at 2" per turn. 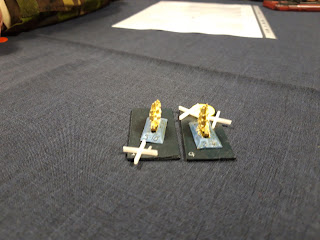 One ship is able to catch me, but I managed to damage it, which allowed me to outsail it. 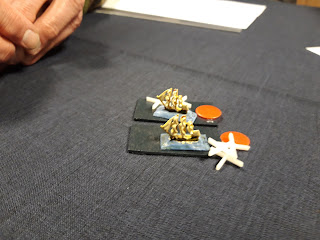 Sadly, I didn't sail quite far enough away to get out of range of its guns and we ended up in a messy boarding action. With both ships crippled, it was evens, except the French were on -1 and the British were on +1 and the RN inevitably triumphed. It was a glorious interlude however, and the captured French captain was wined and dined in honour by the gracious British.

That all went jolly well. The sailing rules worked very well indeed, although we did struggle a bit with some of the acute angles (close hauled was between 22.5 and 90 degrees to the wind) and a square grid would probably have helped. The combat was fine, if a bit lethal, but that is the One Hour Wargames way. Not a game for ditherers, that is for sure.