Along with the M8s for some recce, I thought I should get some artillery as well. For the Twin Villages game I had to borrow some US guns, but I much prefer to be able to provide my own toys.

I did a fair bit of research on which guns to get, really I'd have liked some Roco ones for the Charles Grant nostalgia and in the end it was a toss up between PP and QRF. I'd inspected Tims PP 105mm and it was a nice model but on the end my inherent stinginess got the better of me and I went with QRF as they are both cheaper than the PP offerings and also include crew figures. 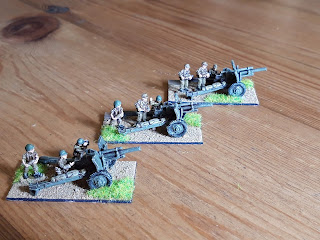 Here they all are, lined up to stonk the Germans.  Three guns, enough for representative amounts of artillery at various levels of game. 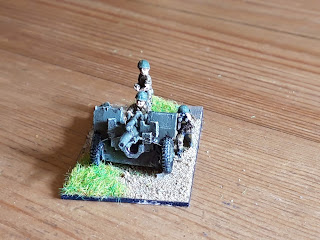 Much to my delight, I discovered that these were one piece casting. Result! Like the M8s, there was hardly anhy flash and just a few mould lines. The worst flash was where the wheels attached to the gunshield and it took a degree of carving and filing to remove it. I'd still rather do that than stick the wheels on though. 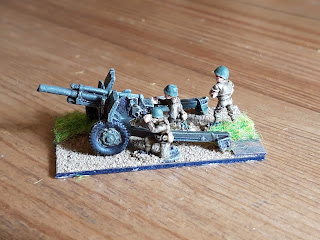 You can't see where the flash was. The gun sits nicely but I had to bend the trails a bit so it sat level and also to get a bit of elevation. 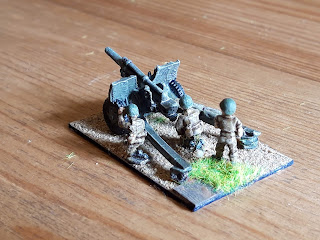 The breech and elevating mechanism detail is basic but perfectly functional. I really like the crew figure in shirtsleeves, I wish more manufacturers would make gunners in partial dress rather than full BD and webbing. What I'd really like are some bareheaded gunners, but iirc only SHQ make those and only in 20mm.

I did the crew in plain khaki as I has it in mind that they could perhaps fill in for Sovier 122mm howitzers, and as US troops, maybe they are just in their wool trousers and undershirts. Annoydingly some of the figures are in what is clearly Vietnam era garb (the bare armed gunner is wearing a flak jacket and some of them are in Castro caps). I filed down the caps a bit so they look more like jeep caps, but they won't really do for Russians. Ah well, you get what you pay for. I suppose I could have used some spare US or Russian crew in helmets but I couldn't be bothered.

I just did these in plain OD, a bit of a wash to pick out some depth and then a light drybrush of dust. Job done.