Along with the US 105s, I also wanted some 155s. I actually meant to order two of them, but a slip of the mouse meant I only got one. In the back of my mind I thought they could also stand in for Soviet ML-10 152mm howitzers. Cheap? Me? Never. 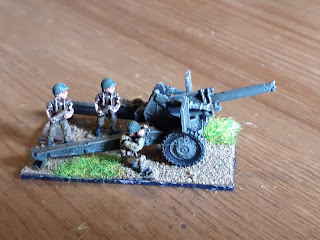 Unlike the 105s, this came in two parts with a separate barrel. I still didn't have to stick the wheels on, so that was good. As with the 105s, there was minimal flash, just some where the wheels and shield met. 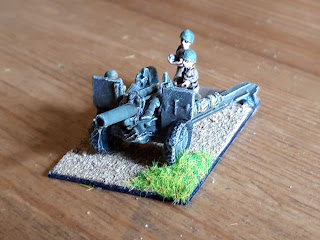 It looks fairly business like from this end. While similar in configuration to a 105, it is a much bigger artillery piece in every dimension. The supplied crew figures were from the same range as the 105mm crews, so I mixed them up a bit make them a bit more homogenous. 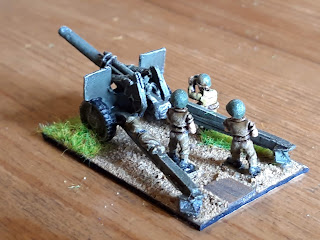 Breech detail. The gun barrel was a bit fiddly to put on as you need to bend the supporting arms moulded parallel to the barrel and fit them onto the supports above the breech. It ends up looking quite good, but with my big fat fingers there was a certain degree of cursing involved. Blu tak and slathers of gel superglue helped a lot. 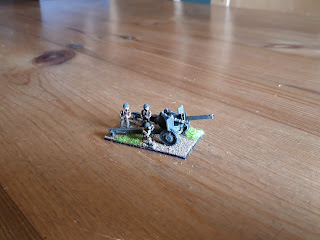 These models can look a bit ropey close up, but at normal gaming distances, it is a nice wargaming piece and looks good. I just wish QRF also did a towed Long Tom instead of the SP version, but you can't have everything.