Having been slowly building up my 15mm US forces, I thought it was time to top and tail them with some support arms. I've already got jeeps and Stuarts for my cavalry troops, but they were missing the iconic M8 armored car. As part of a bigger order I picked up three QRF M8s. 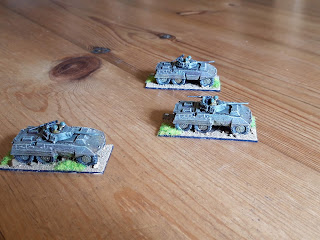 And here they are advancing across the dining table in blazing sunshine which has washed the pictures out a bit. Sorry. 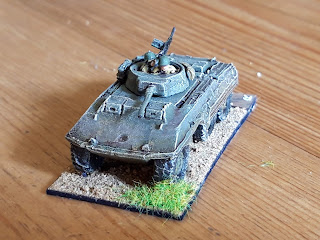 These are nice simple models, and very inexpensive. I was aniticpating having to stick and awful lot of wheels on, and was pleasantly surprised to find the hulls were single piece castings. Woohoo! Yes, you lose a bit of definition, but anything is better than trying to stick on a load of metal wheels and mud skirts. 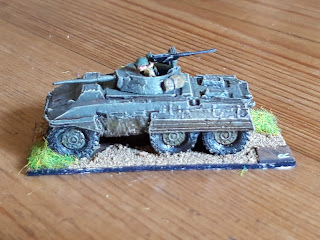 For one piece castings the hulls are pretty good I think. The turret is also a single piece casting with the crew cast in place, but a separate .50 cal which fitted its locating hole perfectly. There was hardly any flash on the model at all, and just a few faint mould lines. 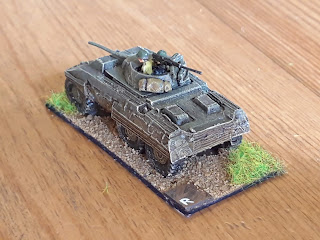 There is some nice raised detail on the panels and engine deck, as well as some nice deep lines. I did these in overall OD, but as they looked a bit flat, I also gave them a wash of dark brown ink which ran into the lines well but unfortunately dried rather shiny. I waited 24 hours before doing some matt varnish as otherwise there is a risk it'll just wash the ink out of the crevices. One thing to watch is how to position the .50 cals, as at some angles it is very hard to paint the second crewman with the gun in the way. Good job I have some very thin brushes.

The slight painting issue apart, I'm pleased with how they came out and very pleased indeed with how easy to put together they were. Recommended.