Battle of the Isonzo

Tim put on a rather grand 54mm WW1 game covering one of the (many) Battles of the Isonzo. This one featured Arditi and Alpini assaulting an Austrian mountain battalion in the winter of 1917.

I was CO of the Austrians, and we had three rifle companies and an MG company to defend our mountain lair. We had to plan for this sort of thing: 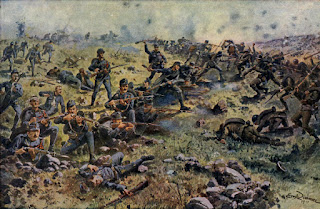 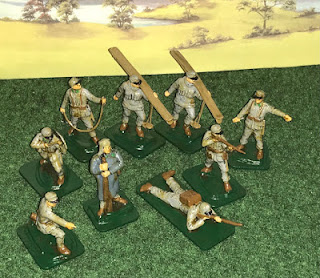 Tim has been busily painting the relevant toys, these are Austiran mountain troops largely converted from Airfix 1/32nd scale WW2 Gebirgsjager. Close enough.
We ran the game prep over a number of days of real time, with air recce, then a preliminary bombardment and finally the infantry assault.  The view from our mountain top was very grand, but annoyingly the Italians seemed to be hiding in the trees. 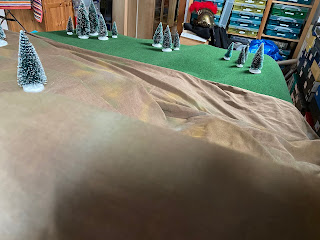 So, it was time to call up the airforce to take some photos. 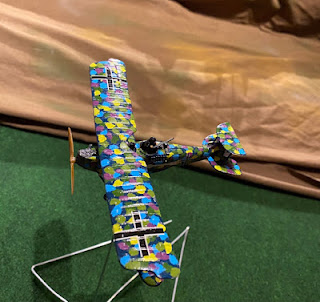 We had this rather grand Hanover to fly over the Italian lines. 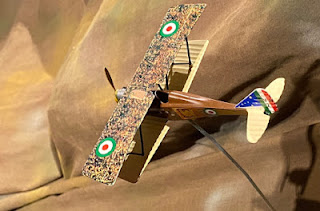 Very unfairly the Italians responded by sending their own planes over for a bit of a shufti. 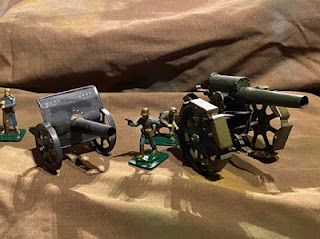 Meanwhile our gunners got ready to repel the attack. These guns are from Tims huge collection of 54mm guns, being tin plate toys of all things.
Our initial operational planning was done from this highly detailed topographical map! 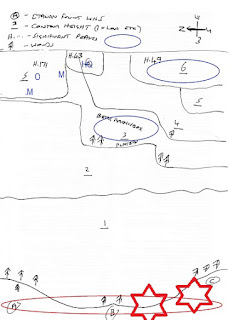 The Austrian positions are marked in blue. We had companies on the plateau and Hill 49, with MG bunkers and an OP on and around Hill 171. We also had a company of Stosstruppen in reserve, ready to intervene a required.
Following the air recce, w had a chance to fire off a counter-bombardment on the Italian positions.  The planes showed that the Italian front lne was packed with troops, and the big stars are where I wanted our bombardment firing. That sector seemed a better approach for the Italians as Hill 171 was well covered by MGs, so softening up the enemy in the south seemed to be the way to go. 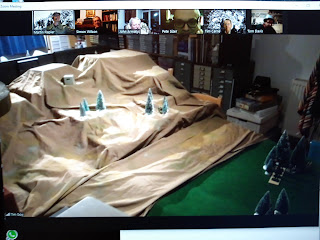 Tim had fashioned this rather grand mountain out of boxes and sheets. My command bunker is visible in the centre. 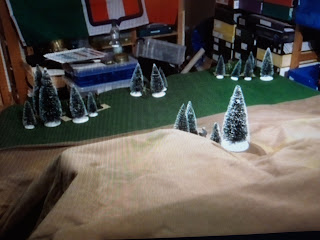 We had a pretty good view from the top, I don't fancy the Italians chances once they come out into the open. 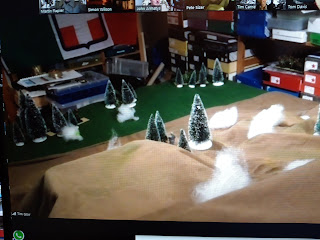 Our guns fired a barrage on the Italian trenches. Very unfairly they fired back. They seemed to have a lot more ammunition than us. Our gunners did manage to drop their shells roughly where I wanted them Hurrah! That will give them a headache. 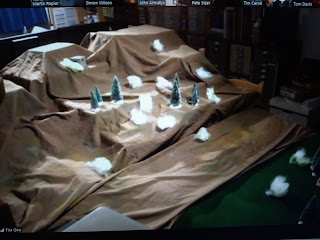 Pretty soon the mountain was plastered in shell bursts, smoke and drifting clouds of gas. Tim only told us the effects of the enemy fire, and it turned out we had got off pretty lightly although there was an alarming amount of gas floating around. Gas, gas gas!
Sadly my command bunker had taken a direct hit, which took our HQ and comms out of action for a number of turns. 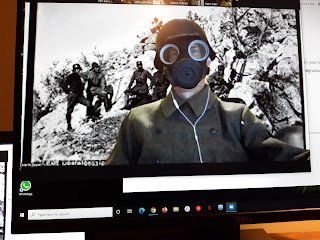 It was time to put on my gas mask and helmet. This did slightly seem to impede communications with everyone else, but as I was suppressed for three turns, that was fair enough.
As the shelling ceased, the shrill sound  of whistles broke out along the Italian line. The enemy were coming... 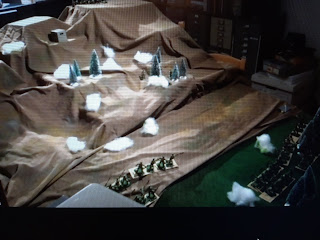 Hordes of Italians emerged behind the barrage. Alpini in the north, eyeing up the steep crags leading to Hill 171, while the Bersaglieri were in the south, reinforced with a company of Arditi. The Bersaglieri hung back a bit as there was a lot of gas hanging around. 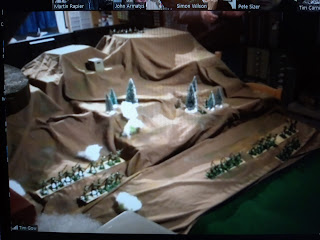 The massed Italians in the valley made a great artillery target, and our heavy guns dropped a defensive fire mission which was bang on and wiped out a whole company. The Italian attack was covered by MGs and the Austrian company on the plateau was suppressed. Our MG on Hill 171 was out of range, while the gun in front of Hill 43 was still suppressed. 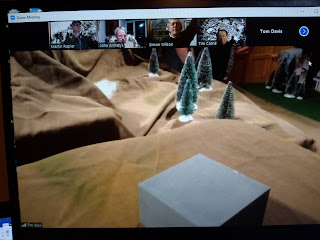 Annoyingly the Italians made it into dead ground, so we couldn't see them from up the hill. 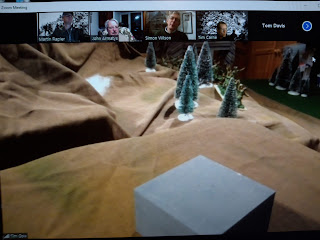 Then a horde of Bersaglieri rolled in front of the plateau and made short work of the few survivors of the Austrian company there. 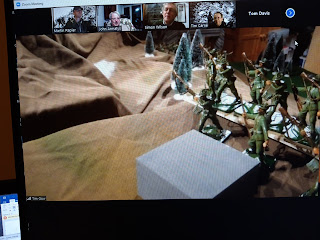 At this point a load of Alpini finished scaling the heights of Hill 171 and appeared right in front of the bunker! Fortunately the bunker on Hill 43 had recovered now, so we poured a crossfire into the Italians, sweeping away a whole company. 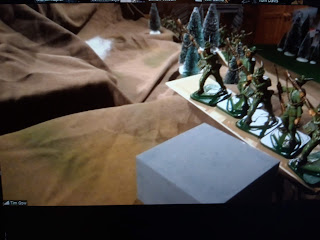 The next wave pressed on, while the Bersaglieri were busy mopping up the plateau. 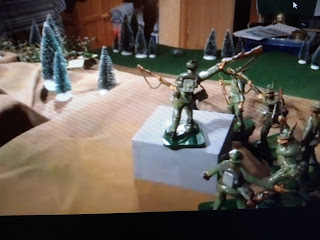 This turn we suffered stoppages and the Alpini surrounded the bunker, then took it by close assault. There were no Austrian survivors. Hill 171 had fallen! 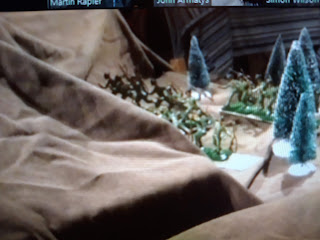 This was the cue for the Bersaglieri to head for Hill 43. Hordes of them piled up the slope, and now there was just the MG left in my command bunker to stop them. The first volely wiped out the Arditi leading the attack. 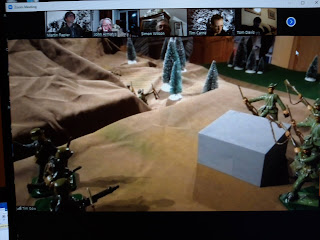 On Hill 171 we committed our Stosstrupp company to retake the hill. These boys were as hard as nails, but so were the Alpini. 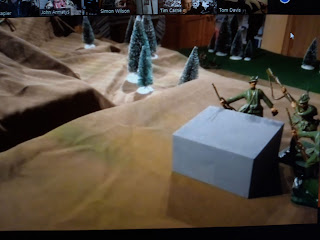 The Alpini managed to repel the attack, although not without loss, and the Stosstruppen fell back down the mountainside again. 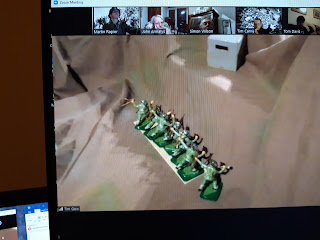 At hill 49, the MG managed to take out another company of Bersaglieri, and combined with their earlier losses from artillery and MG fire, that was enough to halt the attack. The survivors were pinned down in a very unenviable position. 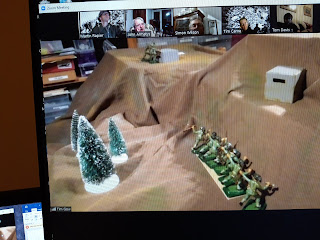 This left a handful of Alpini on Hill 171, and the Bersaglieri pinned down in front of Hill 43. 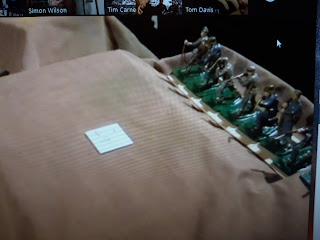 Meanwhile our untouched reserve company was still dug in  on the reverse slope of Hill 49, ready to re-occupy the lost ground. 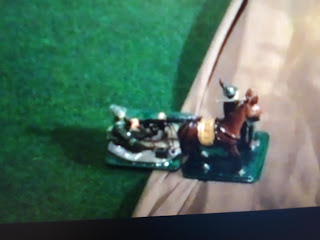 The Italians were busy trying to load their MG company up into its mules, but it was too little, too late. 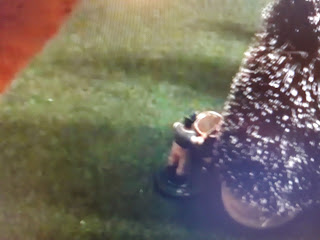 The field cookery company had a nice big can of soup on the go, and that seemed far more appealing then running uphill into Austrian MG fire, so the Bersaglieri streamed back down the hill for tea, able to report that they had stormed the Austrian trenches 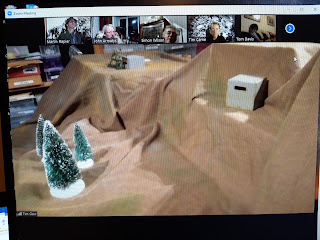 This left the lonely Alpini on Hill 171, who were faced with the prospect of being isolated and cut off, so at nightfall they also fell back, but were able to report the capture of Hill 171 and the destruction of the Austrian positions thereon.
Once the Italians had gone, the remaining Austrians re-occupied the vacated positions and reported back to the High Command that the position had ben restored and the Italians repulsed. All Quiet on the Western Front, and all lined up for the next Battle of the Isonzo....
That was a great game, huge fun, and Tims mountain was a miracle of wargames engineering. As ever his 54mm figures were delightful, and the extended preparation, recce and planning time gave a real feel for a WW1 battle, with the actual assault horribly bloody and brief.