My session at VCOW 2021 was a re-run of the Lindern game I'd run at the club a couple of weeks before. It is always best to playtest Conference sessions if possible - I needed to be sure I could fit it into the allocated time.

I had a pretty good turnout for this one, three Germans players and Four US with a couple of observers. I sent out the briefings beforehand so they'd have a chance to think about it prior to the game.

Nigel, Ian, Dave and Ken took the US, while Jonathan, Ian and Rob took the Germans. 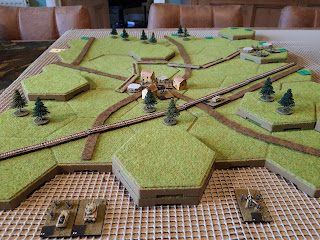 The setup was the same as last time. A couple of German companies in each of Lindern and Toad Hill, with a small armoured KG in reserve and some artillery in support. The main change I'd made was to substitute a company of Pz IVs for the Tiger IIs, Tigers would have been an unnecessary distraction. The main German defences were the fortifications in Lindern and on Toad Hill, with the AT ditch in front. 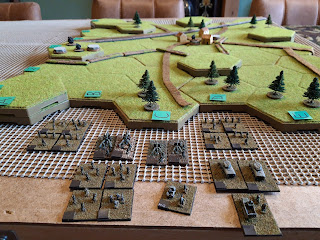 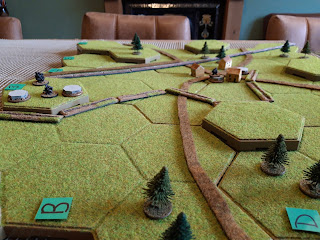 All looked quiet from the US lines, just shells landing around the German positions.
I sent each side a couple of photos of their setup. 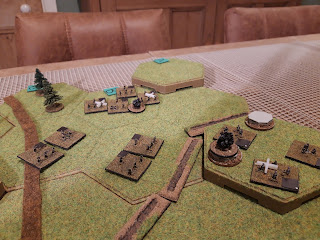 The action opened with an all-out attack on Toad Hill. Both US infantry battalions formed up to assault the pillboxes, covered by artillery fire. The German defensive fire was quite effective (you can see the hits on the unit in B1). 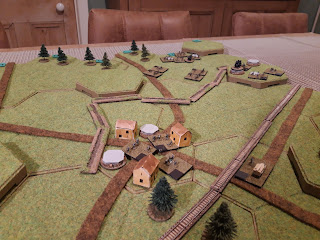 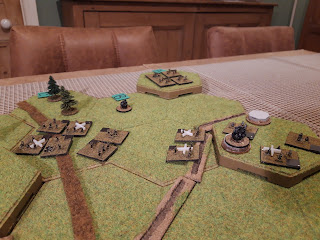 The US reserve infantry (Ist Bn) rolled up on Hill A1, while IInd battalion assaulted in two waves across the AT ditch, covered by the 105mm guns. 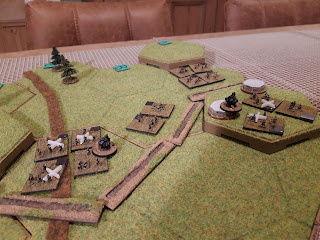 Unfortunately the leading waves were cut down despite the German being suppressed, but they did inflict some losses on the defenders. 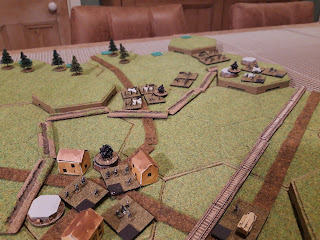 The US IInd battalion headed for Lindern and came under artillery fire near the AT ditch. US artillery replied in kind. 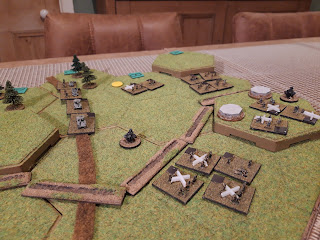 US IIIrd Bn becmae disordered and fell back to B1, while Ist Bn advanced east off Hill A1 and IInd Bn outflanked Toad Hill from the south by crossing the AT ditch as US artillery shelled the Hill. The Germans were down to half strength now but had inflicted significant damage on the US (the equivalent of three companies).
At this point the US armoured reserves came on down the central road from C1. 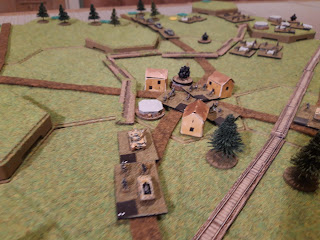 The Germans responded with the 9th Panzer KG, who drove through the railway underpass to the outskirts of Lindern. 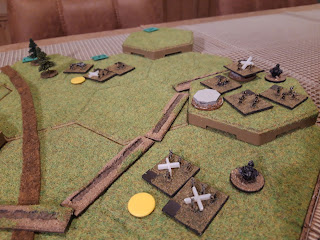 IInd battalion assaulted the German positions, but fell back disordered with  heavy losses from German defensive fire, but Ist battalion followed up and overran the weakened defenders with minimal loss. Toad Hill had fallen!
US IInd and IIIrd Battalions needed to reorganise, but Ist Bn was in fine fettle. 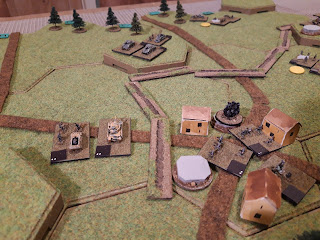 The US tankers took up position on Hill D2 overlooking Lindern and the engineers set about gapping the AT ditch. The German armour failed its movement roll and was stuck down in the valley. Not a great place to be under the guns of the Shermans. 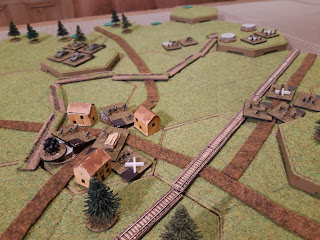 US Ist Bn pressed on eastwards and crossed the rail embankment. This prompted the German HQ to withdraw into Lindern and US artillery plastered the town. Both IInd and IIIrd Bns had reorganised now, and IInd Bn occupied Toad Hill as IIIrd Bn approached the AT ditch. 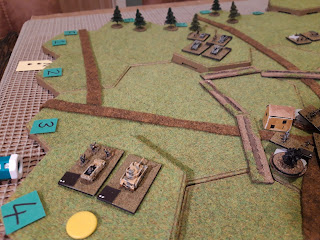 The Germans made it up onto Hill F4 and settled into a long range gunnery duel. The Germans became disorganised while under fire. 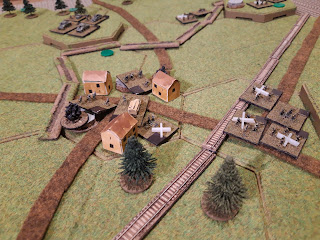 US Ist Bn took the rail crossing east of Lindern under heavy fire. 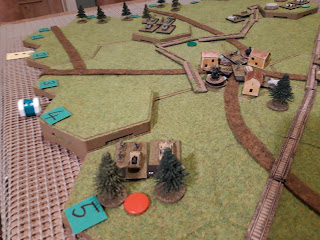 Meanwhile the Pz IVs came off worst in the gunnery duel and fell back in dissarray to the woods on the reverse slope, leaving some burning tanks on the hill. 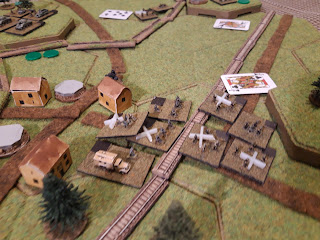 Faced with the loss of their communications to the rear, the Germans launched a desperate counterattack against US Ist Bn, including the Regimental CO! 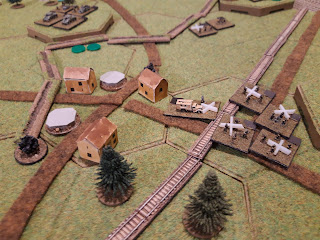 The US troops gunned most of the outnumbered Germans down, but to everyones astonishment, the Regimental HQ survived. This left the crossing objective contested, so it was in theory a German win (for the next couple of minutes anyway). No-one rated the Obersts long term chances against the best part of an infantry battalion, so I think really the US got that one. 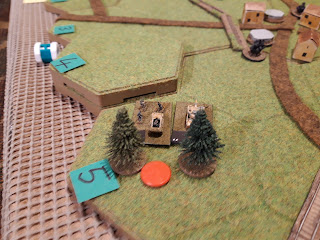 The 9th Panzer boys failed ot rally so would no doubt slip away. 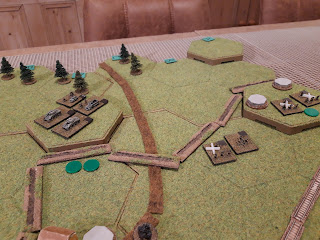 The US engineers successfully gapped the AT ditch, leaving the way open for an armoured exploitation via Lindern, which was now largely empty of defenders. Toad Hill was also firmly in US hands, unhinging the defences further north. 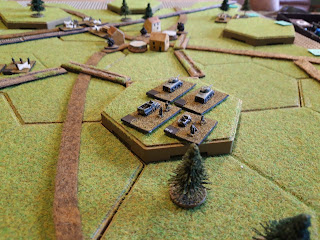 The US tankers consider the best route into Germany.
Well, that was a very difference to approach to Sheffield game. The US ignored the open flank on the right, and instead crashed  right through the main German defences. Great stuff! The tankers in this game were also quite subdued, unlike the Patton like action in the last game, but it did mean that the US ended up with all their tanks, rather than just half a dozen battered survivors.
The players all seemed to enjoy it, the comms held up OK and we finished in plenty of time for a chat (the actual game only took an hour and fifteen minutes) so we had a good washup afterwards. It is a mature game system, and I was glad to expose it a wider audience. For those interested, the rules will be published in The Nugget at some point, and here is the scenario with both German variants. Lindern