I have a certain hankering to go back to the Spanish Civil War again, and I've had a long standing design for a scenario covering the Battle of the Jarama in 1937. Somewhere or other I found a very detailed OB which actually listed the battalion level composition of the Nationalist brigades as well as the artillery holdings for both sides rather than the vague acounts you find in Thomas, Beevor et al.  Originally I thought I'd do it using Megablitz, in a similar manner to the 1938 Battle of the Ebro game I ran years ago, but MB doesn't really work in a remote multiplayer environment as it relies on hidden strength points, hidden order chits and hidden combat results and I can't think of a way of modding it for remote play without breaking many of its core systems.

It was easy enough to tweak OP14 into something more suitable for 1936 though, by simply beefing up the armour and air support rules and modifying the ground scale a bit to represent the rather more dispersed units and the timescale to allow for the increased ground scale. Job done I thought,  but then came the interesting experience of seeing how it actually played out. 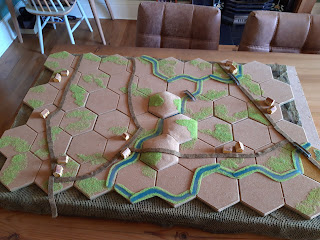 At a ground scale of 5km = one hex, it ended up looking something like this. Madrid is off the top of the map, the Jarama runs through the hills in the middle and the main road from Madrid to Valencia is off to the right. This is already a bit bigger in frontage than the average WW1 battle (avid readers may recall the Battle of Amiens on a front of 12km I ran a year or so ago). If we were playing this f2f I'd go with a smaller ground scale (say 3km per hex) but there are limits to what my camera can sensibly show to remote players. 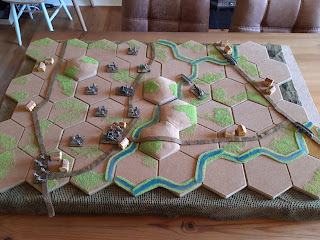 Next up, I tried some deployments. For playest purposes I just used one base per brigade, each brigade represents a couple óf thousand troops (3-4 weak battalions), already much smaller than the WW1 equivalents. However, I could manage a passable imitation of the deployment of Pozas's Central Army Corps with eight mixed brigades along its historical front and even manage a small reserve. 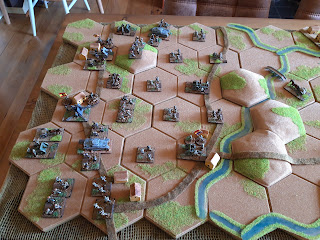 On go the Nationalists from the Army of Africa. Their brigades are quite big, typically composed of two regiments, each of multiple battalions. Mmmm. OK, well they can have two units per brigade, they've also got those bad boys from the Condor Legion with Panzer Abt 88 and a ton of artillery including 155s and 88s, plus a really annoying cavalry brigade with three weak regiments. So I'll have to let the brigades stack as irl they had wildly varying frontages. 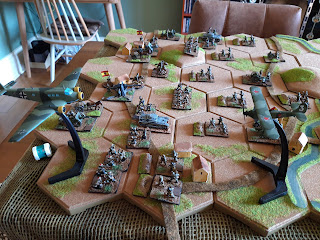 They've also got some planes. Condor Legion Ju52s vs Soviet supplied Pe 2s. I didn't bother repainting the markings. OK, so there is a fair bit of stuff there but not particularly more dense than other OP14 games we've run, certainly nothing like Peronne 1918 where I had something like six entire Corps on the table. 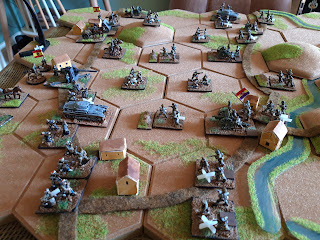 And off we go. The Army of Africa smashes into the surprised Republicans and pushes them back over the Jarama. After a few days Lister and El Campensinos communists and International Brigades rock up and push the Nationalists back again, to a degree. That was a fairly typical rhythm for all the bigger SCW battles as both sides only had the resources to fight one major engagement at a time. 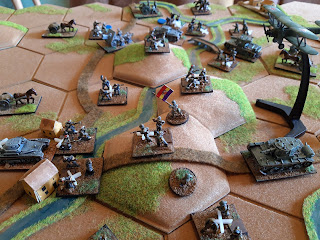 So we end up with this sort of thing. Moroccan Regulares have made it over the river and up onto the heights, but Pavlovs Tank Brigade and the IBs are bravely counterattacking up Suicide Hill and have pushed the Regulares and their accompanying Panzer 1s back across the river into St Martin de la Vega.
All well and good, I played this through a couple of times and although the activation, movement, combat and reorganisation mechanisms worked fine, I hit a snag. SCW battles are long, really long. The Jarama lasted, in fits and starts from the 6th Feb until the end of the month, although the climax of the battle was on the 12th-14th. OP14 doesn't do long battles very well, it works for a day or two (or maybe three) at most and even with just two turns a day, it was taking forever with the whole overnight exhaustion/reorg sequence becoming quite onerous.
Sure, I could have gone for a smaller part of the action, but that rather defeated the point as these aren't large forces - maybe 25,000 Nationalists and 30,000 Republicans with less than a hundred tanks and planes on each side. For whatever reason, the force, space and time ratios weren't working - a function of more modern force densities with WW1 era command systems I suspect.
So, back to the drawing board. The map scale looked about right, as was the level of troop representation, I just needed something which could run multi-day Army level battles with a bit less faffing than OP14, and I had a go with Panzergruppe instead. I had to fiddle with the unit ratings a bit and the deployment was a bit different due to the shorter artillery ranges and lack of strong ZOC. 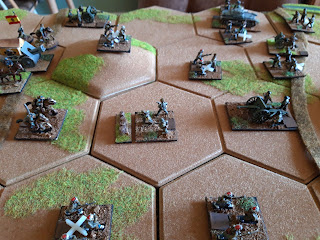 Off we went again. Here the Nationalists have pushed hard on the north and south flanks, bypassing the Republican centre. Barcuelos cavalry keep them pinned place, but already the Regulares are next to to the Republican gun positions.
This effort felt much slicker as the reorganisation and supply sequence is built into each game turn. Units face the same choices of march, fight or reorg but it is all integrated into a single decision point. The only real tweak I made to the existing system was allowing units to try and reorg when they were adjacent to the enemy, albeit it at a penalty. This is quite a high density battlefield compared to the Ukraine in 1942 and forcing units to break contact to reorg seemed to be too much. This may  be too beneficial to the defence, but seemed to play OK in practice. The reorg mechanism is something I've fiddled with on and off ever since I first wrote Sinai 67 and I've never really taken into account the larger ZOC sizes which came from moving to a grid. 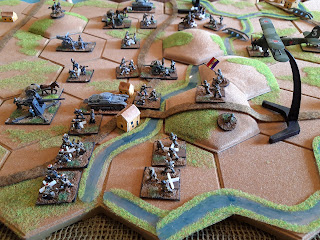 So here the Nationalists have pushed Posas back to the Jarama in the south, hits are scattered all around, but the Nationalist units are much stronger and can bear them. The two Republican units closest the camera have only one hit left each and  need to make a choice - stand and dig in? stand and reorganise, or leg it back a hex to avoid another Nationalist attack next turn. In the event they managed to reorg, but the converged Nationalist attack pushed them back again and gained a bridgehead over the river. 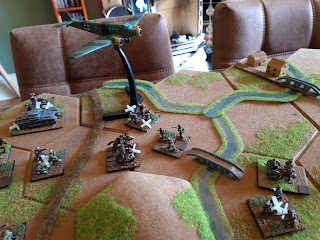 Up in the north the Republicans have managed to get their guns and one shattered brigade over the Pindoque rail bridge, while one unit holds a bridgehead supported by the guns on the far side. The pursuing Nationalist are also a bit ragged with multiple hits. Stop or reorg? The main road to Madrid is only a few km away now (the town and bridge in the top right corner) so the Nats opted for a desperate attack which just succeeded (adjusted combat value of 11 vs 10!) and the Republican brigade fell back. 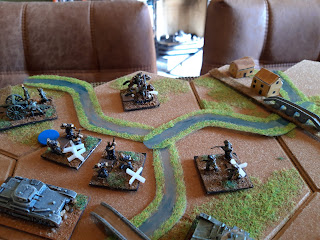 So in turn Barcuelos cavalry crossed the River Manzanares and are parked right next to the road to Madrid. The road is now cut by their ZOC, while the replenished panzers and field guns move up in support. Oooer! What are the Republicans going to do about that - although in fact next turn Listers division came piling down the road from Madrid and thoroughly blocked Barcuelos unsupported cavalry, who also happen to have outrun their supply lines.
This worked pretty well, and the simpler turn sequence meant it was easier to keep track of the unit supply status, which was pretty important as it was the only thing stopping the Nats waltzing across the map in the first few turns. I also experimented with card driven activation for each major unit to model and element of command friction, but it just slowed things up, and in the end I opted to revert to a dice driven initiative system modifed by command quality for each side, which introduced enough friction without going down the whole OP14 card system. The 15mm toys weren't overpowering either, although 6mm would fit the hexes better, but I prefer the character of the bigger figures for this period and the vehicles are all fairly tiny.
So, good to go I think, and it was enjoyable doing some run throughs of the a scenario I've had planned for at least 15 years and good to be doing some proper play testing. I suspect it will still be a bit chaotic in a remote environment as the units aren't as well defined as in OP14, but I'll just have have to try and keep track of stuff. It doesn't help that at this stage neither side really had divisions as combat formations, just a random assortment of brigades under varying levels of ad-hoc higher HQ. I still think OP14 would work for the SCW, but for more restricted actions spanning a day or two. I shall try this out on the Sheffield group and see how we get on.