Finally, the last batch of 6mm ACW stuff. As for the Union, I did four Confederate artillery pieces and two units of Zouaves (which used up all the figures in the Zouave pack, although a couple of strips of skirmishers were left) . 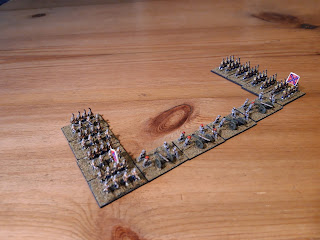 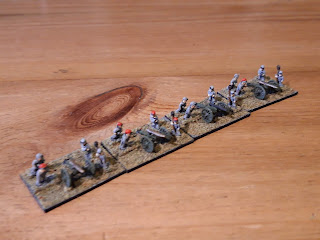 I did three Napoleons and one 3" rifle for the Confederates. I just the gunners in overall cadet grey and picked out some of the kepis in artillery red, which made a nice contrast. Gun carriages in olive green and metalwork in black apart from the brass barrels on the 12pdrs. 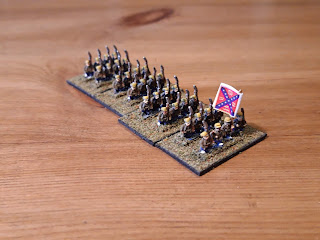 I didn't want to go too over the top with the Zouaves uniforms, particularly as the very fancy ones were rare in the field. This unit is based on the Maryland Regiment after they swapped their blue(!) jackets for brown ones. Brown jackets, dark grey pantaloons, white gaiters and yellow cap/fez. 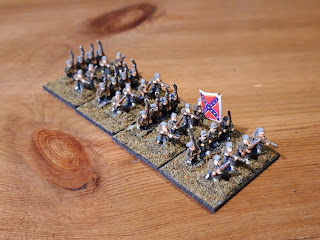 The other unit I did even more drab so they could blend in more with the rest of the line units. Brown jackets, dark grey trousers and light grey cap/fez. I kept the white gaiters though as they look quite smart.
With all that lot done, that is sufficient for two starter armies I reckon. I can fill in the gaps next year as there is plenty more stuff in the box. Now  I need to pick some rules! For remote play I will probably rework Rifle and Kepi, but for face to face, I think Horse, Foot and Guns is the way to go. Something to play around with anyway. None of the Neil Thomas rules for this period grab me, and I haven't got anything like enough stuff for Fire and Fury. I went through similar iterations when I first became interested in the Austro Prussian War, but unlike 1866, there aren't the same extreme asymmetries of weaponry and doctrine in the ACW.