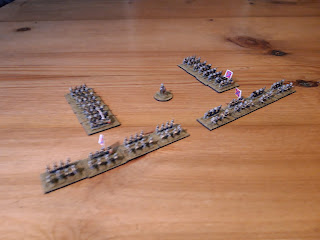 Four infantry units of four bases. (Or sixteen divisions for the original 1991 edition of Horse, Foot and Guns!). 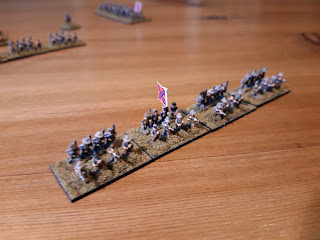 Most of the infantry are in brimmed hats. I was really nervous about painting these as I hate doing irregular uniforms, but in the end it was really easy. I did the lot cadet grey then just went along picking out three or four figures on each base with various shades of butternut or dark grey. I was really pleased with the effect in the end, and I found Humbrol Dark Earth made an excellent grey/brown butternut colour, not too garish. I did the hats  in a similar way, mixing up the colours a bit.  There was a useful bit of research I came across which had analysed ACW photos and worked out the proportions of different shades of hat colours, which helped with the ratios. 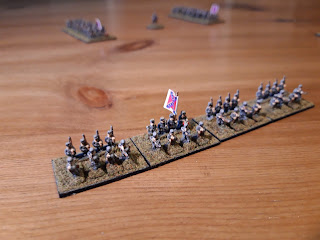 One unit is just in kepis. I did these in rather more 'regular' colours than the others, just the odd bit of butternut and variations in grey. The flags are Baccus. 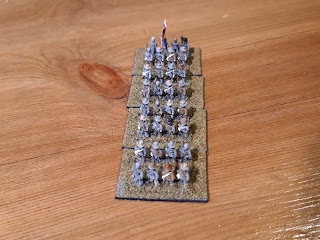 It is easier to see the colour variation from the rear. I also picked out some haversacks in white which added to the non uniform appearance. 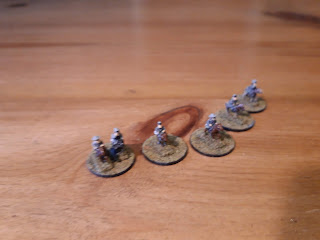 As with the Union, I just did half a dozen leaders. Mostly single based with one double based. There are tons more of these figures in the bag but this will do for now. 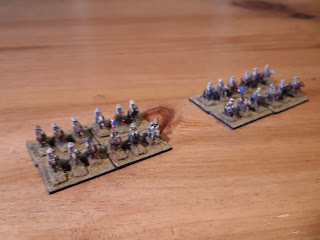 I just did a couple of cavalry units, like the Union, one unit in kepis, the other in hats. I picked out a few kepis in yellow but didn't attempt facings on any of the jackets. The flags were hand painted.  All the units are based on artists mounting board and flocked with Woodland Scenics Blended Turf.
I was generally pleased with how they turned out, and I'm more confident about finishing the rest of the stuff in the box now.