Over the holiday break we normally have an extended club meeting to play games and get out of the house(!). Last year was curtailed by Covid, but this year the government has decreed we can meet face to face, despite case rates being almost 200,000 a day. Oh well, I guess we are all vaccinated.

So with a certain degree of trepidation, and after almost two years of playing online, we actually met up face to face to play. 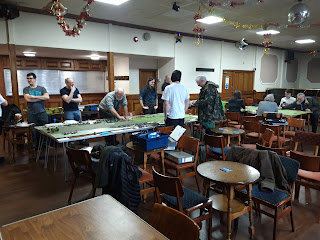 It was all rather jolly and had the feel of a small wargames show. We were in the Conference Room rather than our normal one at the workings mens club, and this was big and well ventilated. 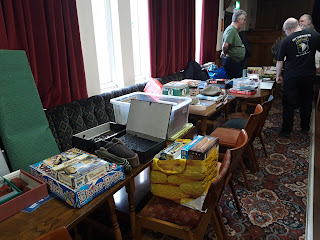 An extensive Bring and Buy added to the show feel. Tim, John and I all had a load of crap, high quality merchandise, to sell. In fact my  old AK47 Army was a pretty good deal, I priced it to sell and got a buyer. John had already bought all my 15mm Colonial stuff, which was also priced to sell. As a rule I don't like to sell things, but I'd had all the use out of these two armies I was ever going to have so it was time for them to go and free up some shelf space. 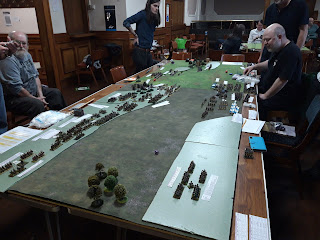 Some of the regulars had taken the opportunity of extended play to run a big 15mm Napoleonic game. 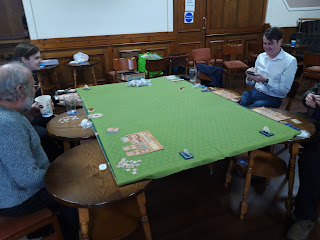 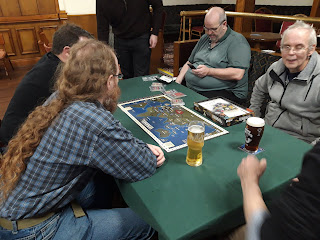 And good old Quartermaster General! (the WW2 version).
We spent so much time on the Bring and Buy that we didn't have much time for playing, but we did get a couple of games in. 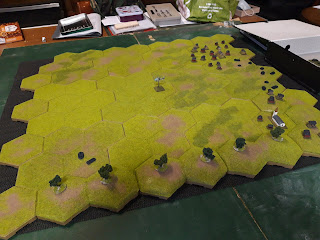 We were having another run through of Johns Portable Cold War game. Terrain from the north. This was based on Exercise Chinese Eye conducted by BAOR in the mid 1970s and documented in Rowlands 'The Stress of Battle'. 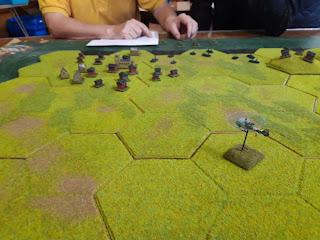 The exercise was monitored by a helicopter. Here it is flying around. 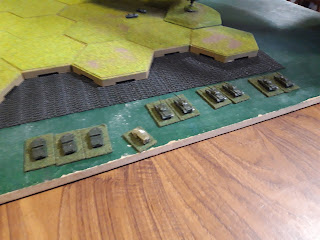 The attackers, 'Orange'. irl this was based on a reinforced T62 battalion, but Chieftans and FV432s were substituted for the T62s and BTs. The vehicles were all equipped to laser SIMFIRE, as the purpose of the exercises was to analyse the behaviour of units in combat more scientifically than umpire decisions. We got to play with proper models of T62s and BT50s, GHQ no less. The BTR command vehicle was an ancient resin Scotia model. 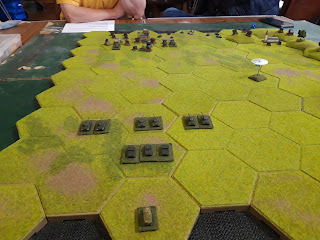 Blue force had a couple of troops of Chieftans, a platoon  of Mechanised Infantry in  FV432s and a section each of Swingfire and Milan. They were defending those villages in the distance. Each hex is 500m, so a distinctly unpromising piece of ground to attack!
We set off with the tank companies in line abreast, the infantry just behind, as per the diagrams in 'Spearhead of the Attack: The Soviet conduct of tactical manouvre'.
Blue held their fire until we were somewhat closer. There was no air or artillery in the original exercise, just a notional artillery fireplan, so we didn't get any fire support either. I suspect Blue would have deployed a bit differently if faced with a barrage of 152mm guns and BM21s. 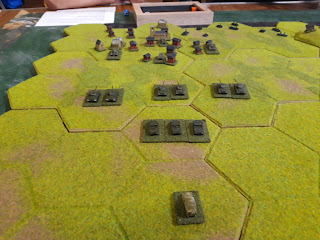 We got really very close indeed before Blue opened fire. Not sure I'd have put the Strikers right out in front. 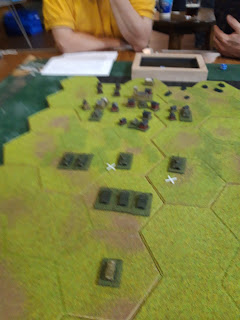 A barrage of 120mm gun fire and missiles tore into our ranks. Two platoons (SP) of T62s went up in flames and the survivors were pinned. Our return fire was ineffective. 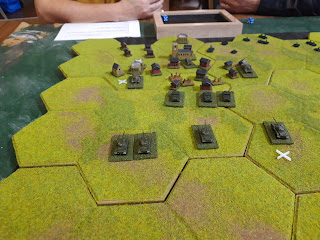 We pulled ourselves together and launched a mechanised infantry assault behind a barrage from the remaining tanks. We managed ged to pin one of the Chieftans and one of our companies rallied. The infantry just charged into the town, dismounted and assaulted the Strikers. A couple of SPAT vehicles vs an entire infantry company in a BUA wasn't much of a contest. 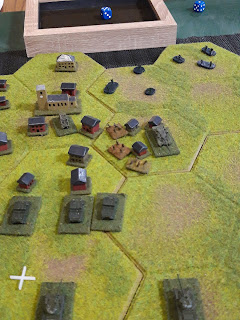 The infantry kept on going and did exactly the same thing to a troop of Chieftans on the right. Not sure a BUA is the best place for unsupported armour. 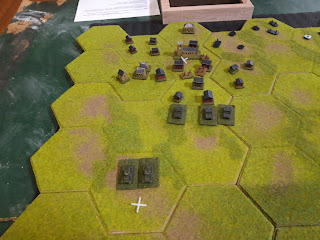 The Milan team from the other village was plinking away and removed the remains of the two damaged tank companies. Meanwhile our third company managed to knock out the last troop of Chieftans despite being pinned. The infantry overran the Combat Team HQ in its Sultans, parked near the village church. 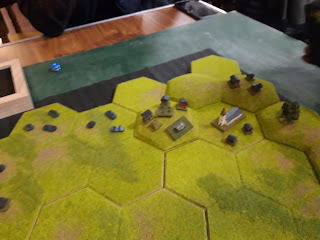 The last objective was the second village, now held by a Milan team and a dismounted infantry platoon. We thought it was worth running the assault to see how the revised rules worked. While Orange sorted himself out for the attack, Blue consolidated the infantry and Milan team on the hill SW of the church. 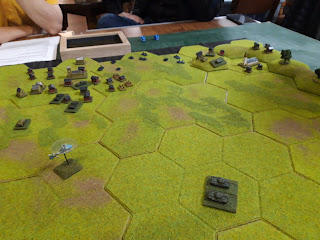 We had decided to go for a wide outflanking manouvre by the last T62 company to shoot in an assault from the south by the dismounted infantry. There wasn't any point mounting up in the face of the enemy AT missiles. Off we went, the tanks keeping out of range of the Milans. 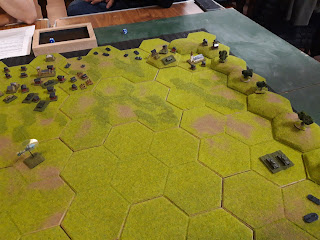 The tanks and infantry were now in position for the assault. 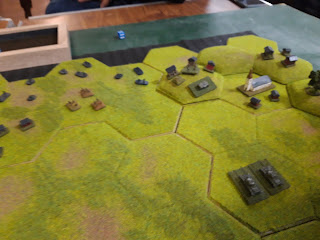 In we went. Our infantry were out of small arms range, but the T62s were now well within range of the Milan team. 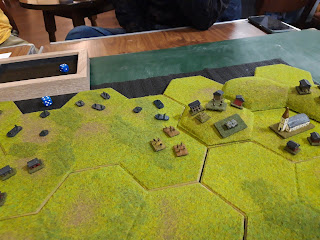 Blue duly managed to get two turns in a row and blew the tanks to bits. Oops. Their sacrifice allowed the infantry close in. 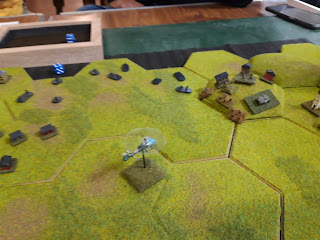 In they went, and bloody street fighting ensued. 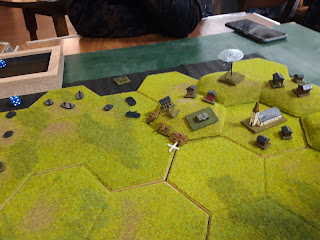 Oops, our infantry become pinned. This wasn't enough to stop them though, and they finally managed to overcome the defenders.
So, I think the main lesson for Orange there is to leave the T62s at home and just attack with infantry! In the real exercise, one of the defending Chieftans opened fire too soon and gave the game away. The entire Orange force then infiltrated forward via the tree line and overran the position.
That all seemed to work OK, and it was nice to play with actual toys instead of remotely. 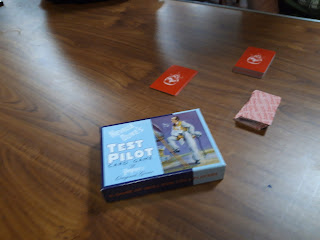 We finished off playing this re-print of a vintage 1950s game, 'Test Pilot'. Presumably published during the high point of Britains post-war jet aircraft boom. 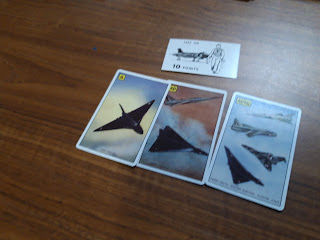 It mainly involved flying early versions of some very familiar aircraft, like this super sexy prototype Vulcan in black. Other aircraft were somewhat less attractive, like the Fairey Airodyne and the Comet.
It was an amusing way to pass the time and drool over pictures of old planes. 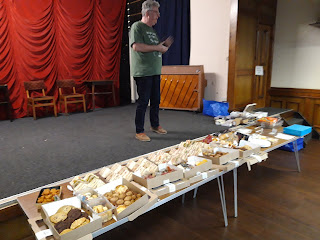 Finally the whole thing was topped off with an immense buffet. The club chair (Tim) addresses the masses before they all tuck in.
That was a great day out, many thanks to everyone who organised it.