Being something of a fan of Fire and Fury and its innumerable variants (I've mainly used it for FPW and early WW1) as well as a fan of Chris Pringles various nineteenth century rulesets, I rushed out to buy a copy of Bloody Big Battles when it came out. Having read it through it has subsequently sat firmly on my bookshelf as I've been stuck fiddling around with other things.

Tim C returned enthused from the recent BBB games day, and offered to put an ACW on using his (very pretty) 6mm figures. I hurriedly re-read my copy of the rules and was equally enthused. 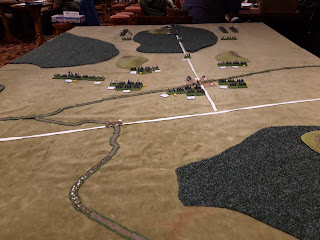 Jerry and me got to play the goodies. We had several divisions of various size and quality scattered about defending some vital river crossing. Unfortunately our chaps had been caught napping and all started 'disrupted', so had to rally to do anything useful. 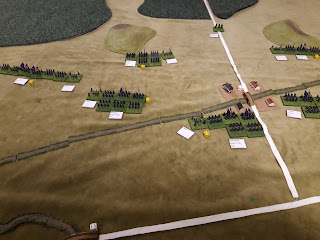 A close up of the lovely terrain and toys. Baccus 6mm on 1" bases, buildings, rivers and bridges a mix of Irregular and Leven. Woods made from cut up carpet tiles, and a base cloth made from old velvet curtains. Roads are strips of cloth. The white markers are unit stats (size, rating, weapons), the little yellow dice show we are disrupted. 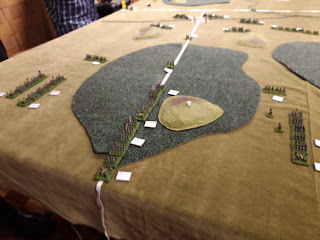 The wicked Rebs pouring on in marc column. March columns give a bonus to activation rolls and allow double movement down roads. All very Volley & Bayonet. 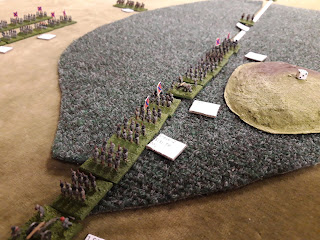 Close up of the Rebs. The white dice indicates that the hill is also an objective. Firmly in rebel hands I think. 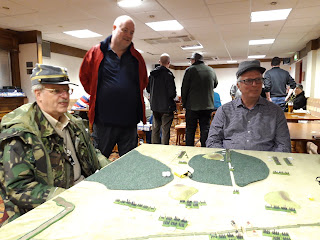 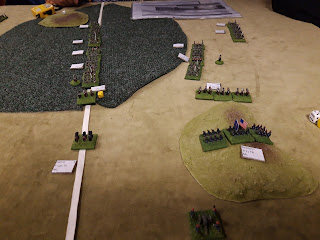 The action opened when I pushed our cavalry pickets and a small division forward to slow up the Rebel cavalry. Our musketry was lucky and disrupted one of the cavalry units. 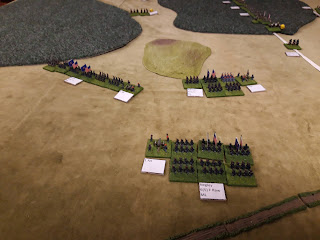 Over on the left flank the Rebs seemed to have got stuck in the woods and all was quiet. 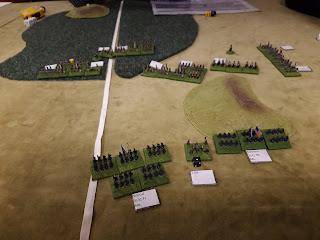 Sadly the the Confederate infantry made short work of our cavalry and began deploying in scarily large numbers. I pushed another division forward, and withdrew back from the hill to conform. I do like manouvering whole divisions. 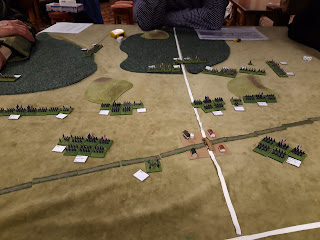 A more general view. One of our reserve divisions is moving off to the right. The Rebel column stuck on our left flank is visible in the distance, but the bulk of their strength is on the right. By this time both sides were exchanging a fair degree of cannon and musket fire to little effect. 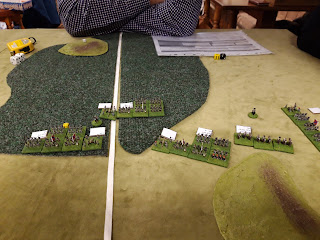 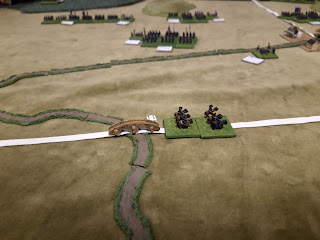 Sheridans Division made an appearance as welcome reinforcements. The cavalry vanguard secured the bridge objective. 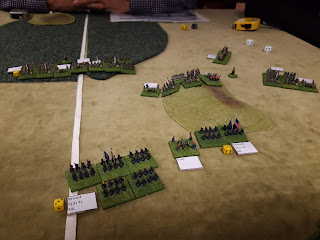 The Rebels pushed forward and things started hotting up. Both my lead divisions were disrupted and one lost a base. 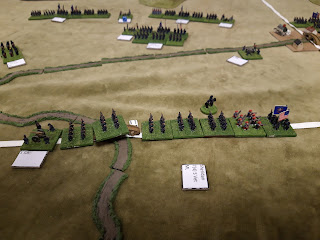 Our left flank was now starting to look pretty secure as the reinforcements rolled in. 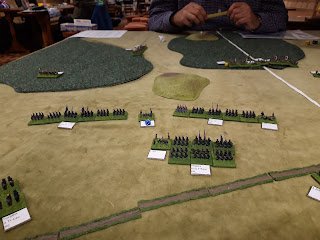 I formed up the units here into an extended firing line with supports. 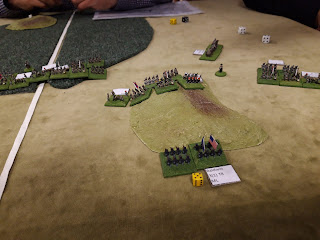 Sadly my depleted division failed to rally and was left stuck in place to face the Rebel onslaught. 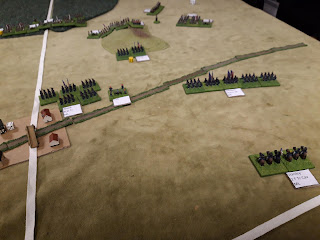 The rest of the chaps had fallen back to defend the river line. Oh well. 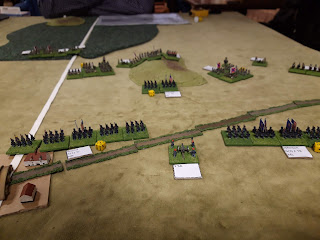 The rebels surged forwards and my entire line was disrupted under a hail of fire. The only good thing was that  we managed to halt both the right hand and left hand rebel units with defensive fire. 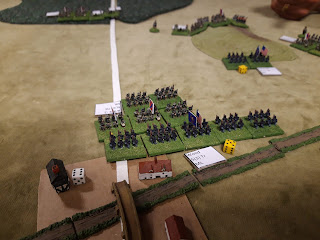 The Rebs rallied and surged forwards again, and my firing line failed to rally. Ouch. 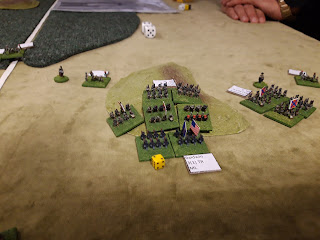 They also poured over the hill into my isolated troops who were still milling around in disorder. 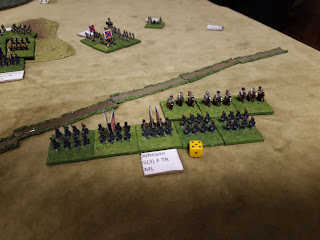 For good measure the enemy cavalry charged over the stream! They were duly repulsed but kept my unit occupied. 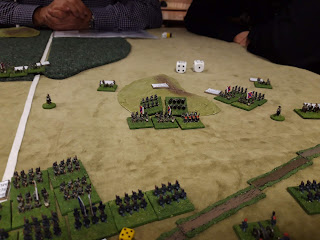 My division behind the hill was unsurprisingly overrun in close combat. 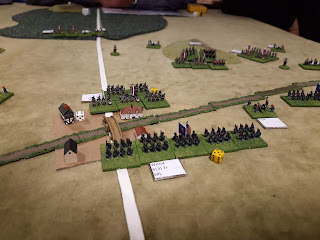 And the Rebel assault on the village pushed my guys back over the river.

At that point we called it a day as an honourable draw. It all rattled along very nicely and was a good tryout of all the mechanisms.  I'd be keen to try it for the FPW (for which it was originally written), and naturally I'll need to do a grid based variant. I did actually to a hex modified version of Great War Spearhead using the F&F/BBB activation system, so it would be easy enough to take the move distances and ranges from that.