I felt my slowly expanding US forces could do with a bit of command/logistic type transport (and it might also turn out to be useful for my Russians as a Lend Lease vehicle for some lucky Brigade Commander). So, on my list of desirable purchases, was a Dodge Ambulance, to go with my M3 Scout Car. Along with some other stuff, off went an order to QRF. 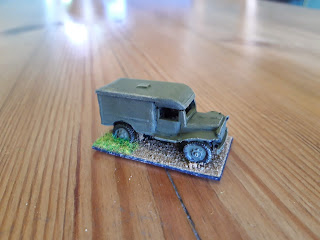 Here it is in all its glory. I wasn't quite sure what to expect, some QRF models are nice and simple, others are a bit fiddly depending on their provenance. This turned out to be just two pieces! The body (hollowed out) and a roof. Thankfully the wheels were just moulded on. 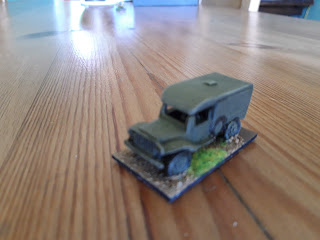 The separate roof allows the drives compartment to be modelled, and there is quite a nice driver with a steering wheel etc in there. It could just as well have been modelled with a closed cab, but I expect that would have made it harder to carve out the inside of the truck body. The only slight complaint is that the roof doesn't quite touch the windscreen posts, even with a bit of bending, but it hardly shows. If I'd have been that bothered I'd have put a dab of filler on. 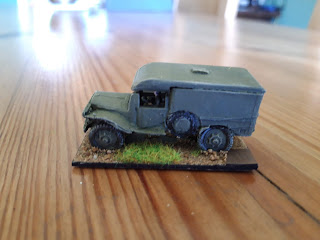 You can see from the side view it is a little crude, particularly the spare wheel, but good enough for wargaming purposes and for the price  can't complain (typically QRF offerings are priced at rather less than the competition, and vastly less than BF). I could probably have tried to clean off the mould lines a bit more, but they coincided with some panel lines. 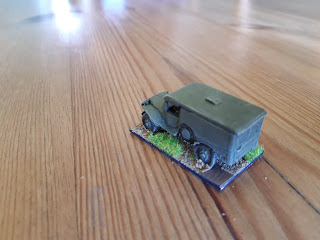 I did the rear windows as painted in, as that seemed quite common. Otherwise it was just finished in plain OD with no markings so it can serve in a range of armies. A good no-nonsense wargaming model which will come in very handy.