Defence of the Bridge

Another 54mm outing for Fistful of Lead, this time taking place in the killing grounds of the American Civil War. Tim C, John and Tim G (proud owner of a new US Cavalry hat) took the dull northerners, while Jerry and I were the plucky Rebs. 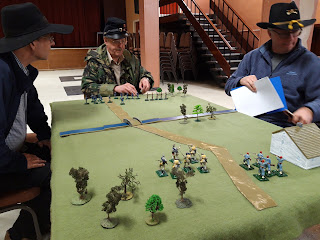 Various sorting of playsheets and toys taking place. The Rebs had to hold the bridge and road until nightfall, while the Yanks had to take them. Nightfall and/or the arrival of massive US reinforcements was signalled by the playing the sixth joker by each side. 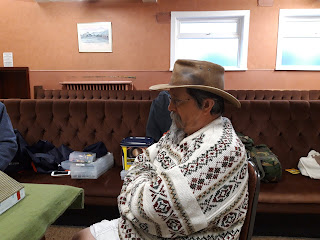 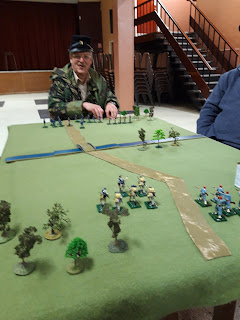 While John sported this rather grand US Generals kepi. You do realise we only play these games in order to wear our hats in public. 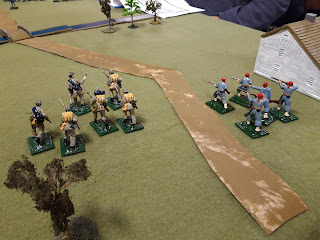 The Rebs. A squad of infantry with an officer, and a squad of Zoaves armed with proper rifles. 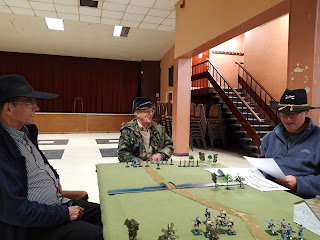 The Union commanders confer. They had three equal units of infantrymen. 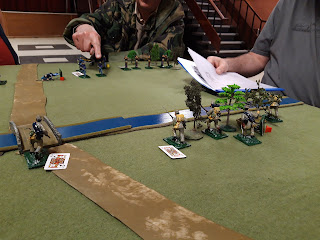 We put the regular infantry forward into the tree line with a bridge guard. The Zoaves hung back to take advantage of the range of their rifles (even if the reload times were hideous). The Union lines were soon engaged with hot fire. 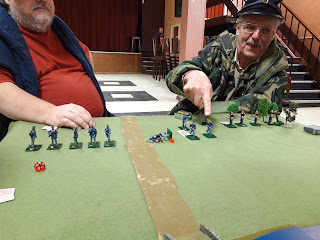 World class pointing from John. The Union plan was apparently to walk slowly forwards towards the enemy. Already one of their number has fallen wounded. 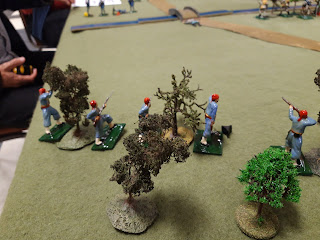 My Zouaves opened fire. The little black markers indicate the figure is unloaded. Rifles take up to four(!) actions to reload, whereas the more normal rifled muskets only take one action. The 'six' cards which allow an automatic reload were highly valued by the Zouaves. 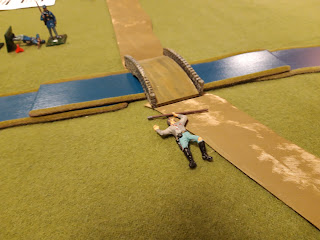 The bridge guard was out first fatality. In death his rifle appears to have morphed into a cannon swab. 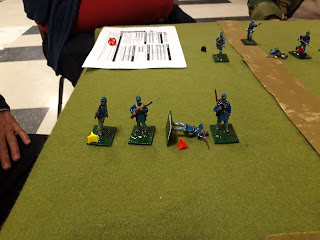 The Union troops directly opposite my troops were gradually worn down by long range fire. 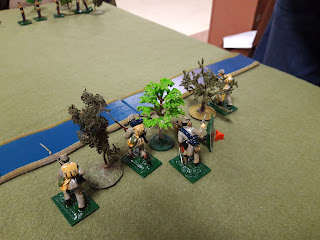 Johns remaining troops were under heavy fire. Fortunately the Union infantry seemed reluctant to close to effective range, which means the trees continued to provide excellent concealment against their long range musketry. 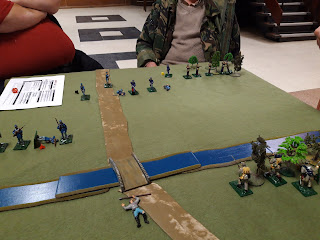 The Union centre was looking a bit ragged by now. 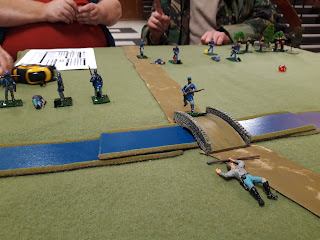 In a shock development one of the Union soldiers ran for the bridge. 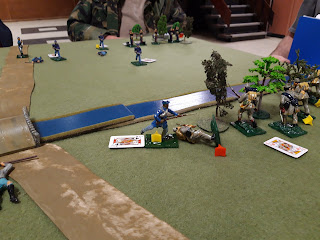 He kept on going and promptly bayonetted one of the Rebel infantrymen. What a hero! 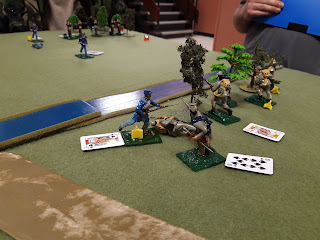 The Rebel officer was somewhat put out by this and rushed over to help with his sword and Navy Colt. 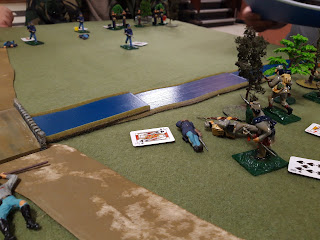 Sadly, if  Stephen Crane has taught us anything about the ACW, it is that heroism usually results in a 'Red Badge of Courage'. The lone Union infantrymen was gunned down by the rebel officer. 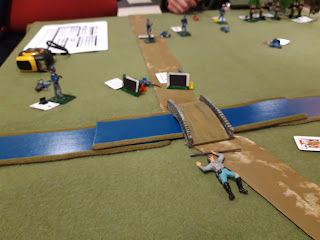 The bridge approaches were now littered with wounded or cowering Union soldiers. 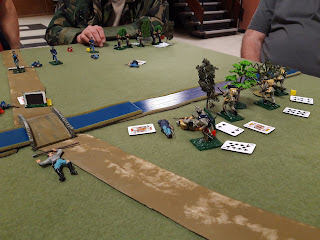 While our forward firing line was still holding on. 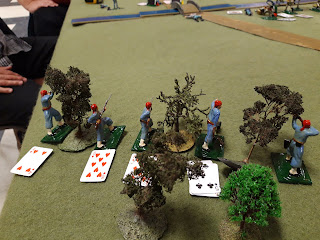 And the Zouaves hadn't suffered a scratch. So at that point it was fairly obvious that the Union weren't going to take the bridge, so we called it a day. "A fly spec on Headquarters maps" as the Union Captain in The Good, The Bad and The Ugly observed, and as Clint himself said "I've never seen so many men wasted so badly".

In retrospect the Union would have better off massing their troops against our forward detachment and closing to effective range as fast as possible, accepting the losses on the way in. At long range against troops in cover they only had a 20% chance to hit, whereas out aimed rifle fire had a 40% chance. At close range the firepower differential was much more even (50% vs 60%) and their superior numbers would have blown us away.

So, another fun game, although this one seemed to take a bit longer than the previous one, partly as we kept forgetting which cards we all had and partly as it bogged down into an indecisive long range firefight (all very realistic no doubt).